No sooner did the Halloween costumes get thrown into the back of closets everywhere, and consumers were greeted with twinkling Main Street decorations, songs of the holiday season, and emails and web ads pushing hot holiday gifts. A lot of consumers say pre-Thanksgiving is too soon to think about Christmas. But retailers know most shoppers are ready to start spending come November. And this year should see healthy holiday spending, with online outstripping in-store purchases for the first time ever.[quote]

The National Retail Federation (NRF) expects sales to increase 3.6 percent-to-4 percent, which would match or exceed the 3.6 percent gain of 2016. The International Council of Shopping Centers (ICSC) expects a 3.8 percent jump in year-over-year holiday sales.

The NPD Group’s Marshal Cohen, chief industry analyst, expects increases will be in the 2.5 percent-to-3 percent range. Despite positive economic signals, he says other factors might curb shopping.

“Stores have a lot of things in their favor,” Cohen says, ticking off a list of positives. “The economy is healthy. If the tax cut goes through, consumers might feel psychologically richer. There’s high consumer confidence numbers, and the job market is running at a strong pace. The down side is the absence of new must-have merchandise and the challenge of the weekend leading up to the holiday.”

This year, Christmas falls on a Monday. While that sounds like it would benefit retailers, who could take advantage of last minute shoppers, Cohen says that weekend will predominantly serve as travel days.

“The weekend prior to that (Dec. 16 and 17) will be the biggest for retail sales,” he says. “More and more people travel now for the holiday. And they travel more than 50 miles, according to the AAA. So people won’t be around to come in to stores. They might even buy gifts ahead of time and send them prior to traveling.”

Keeping with tradition, the largest percentage of consumers (23 percent) will start their holiday shopping in November, according to the Cotton Incorporated Lifestyle Monitor™ Survey. That’s followed by December (21 percent) and “throughout the year” (16 percent).

Prosper Insights’ Pam Goodfellow, principal analyst, says even though consumers are starting sooner and spreading their shopping out, retailers should be prepared for high traffic both online and in stores over Thanksgiving weekend.

“Although sales will remain an important factor for most consumers, many will lean on convenient locations and easy-to-use websites or mobile apps along with free shipping to complete their purchases,” Goodfellow says.

The biggest “shopping holidays” for consumers will be Cyber Monday, when 50 percent of consumers plan to shop, according to the Monitor™ survey. That’s followed by Black Friday (48 percent), Amazon Prime Day, which was held in July (28 percent) and National Free Shipping Day, which this year is scheduled for Friday, Dec. 15 (20 percent).  Another 18 percent plan to shop during the week leading up to Thanksgiving. And up to 14 percent of shoppers plan to duck out of the turkey festivities to take advantage of holiday sales. Just 8 percent plan to shop Christmas Eve.

Stores can’t exactly breathe a sigh of relief that Amazon Prime Day is already over. Yes, the online giant had its biggest day in history on July 12, selling 3.5 million toys and 200,000 dresses, among other things. But to ensure a strong holiday, it has recruited Oprah Winfrey as the first celebrity voice for its Alexa platform and Echo smart speakers. The collaboration is a promo between Oprah’s “Favorite Things” products and Amazon shopping. Users will only hear her voice when they say, “Alexa, let’s shop Oprah’s favorite things.”

Amazon’s expected heavy sales, as well as the online sales from web stores, are expected to push ecommerce holiday shopping ahead of in-store retail for the first time ever. Adobe Analytics predicts online holiday sales will break the $100 billion mark, with Cyber Monday raking in $6.6 billion, followed by Black Friday hauling in $5 billion.

Six of 10 consumers say they plan to purchase clothes as a gift for the upcoming holiday season, according to Monitor™ data. And shoppers expect to buy 40 percent of these apparel presents online. If more apparel purchases are made online, retailers might end up seeing more returns, as it’s hard to judge an item’s fit and feel online. This could be a boon for brick and mortar stores. 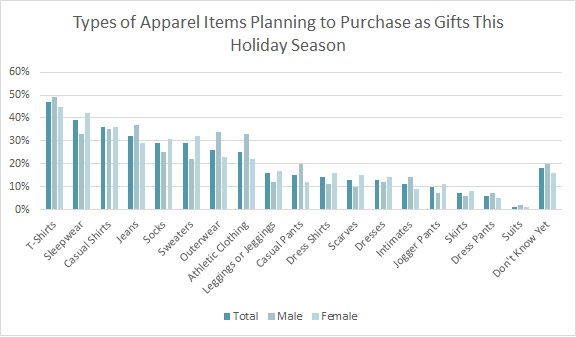 “Returns used to be a dirty word but not so much anymore,” Cohen says. “The average consumer spends 116 percent of what they’re returning. If they’re exchanging a sweater, they’ll buy the cost of the sweater plus more. Returns may go up because online apparel purchases go up. So, holiday sales will still have the opportunity to get a second wind. We now look at holiday as running until the 12th of January.”

Overall, consumers are expected to spend $570 on holiday gifts this year, with men expecting to spend $630 and women expecting to spend $534, according to the Monitor™ data. Of the total spent, roughly $200 will go toward clothing gifts, with men shelling out $247 and women spending $177. The top apparel gift items are expected to be T-shirts, (47 percent), sleepwear (39 percent), casual shirts (36 percent), and jeans (32 percent). Among consumers shopping for apparel gifts, most (62 percent) say they’ll spend more money for clothes made of natural fiber like cotton.

Cohen agrees that the retail winners will be “mass merchants — Target, Walmart, Amazon, maybe regular department stores and the off-pricers — the TJ Maxxes of the world. And for apparel retailers, the good news is there’s nothing really new and innovative in electronics besides the new iPhone. Experiential gifts like cooking lessons and massages, and gift cards will be strong. But we’ll also see a lot of people go back to traditional staple items like sweaters, slippers and bathrobes.”