Right before the inevitable excesses that are a hallmark of the winter holidays comes America Recycles Day, a national initiative of Keep America Beautiful. On Nov. 15, events will be held throughout U.S. schools, workplaces, and communities to raise awareness about recycling, as well as collect millions of pounds of materials that would otherwise clog the country’s landfills. While many might immediately think about glass, plastic and paper refuse, there are programs in place to help those who want to recycle apparel, too.[quote]

But beyond America Recycles Day, salvaging clothes for other uses is a growing concern in the apparel industry.

“Momentum is growing amongst sector leadership to align initiatives and join forces for scale and impact in this area,” says Ted van der Put, consultant and former executive advisor of IDH, Sustainable Trade Initiative, a public/private partnership for sustainable development. Among other things, IDH works on recycling programs with organizations like Fashion for Good, Cradle-to-Cradle, and Fair Fashion.

“Most leading brands are active in this space.”

IDH also collaborates with apparel labels that include C&A, Kering, Nike, Gap, and fast-fashion’s H&M. But recycling clothes is a concern that is growing throughout the industry, from Patagonia and The North Face to American Eagle Outfitters and Madewell.

The burgeoning need for apparel recycling has grown along with Americans’ appetite for trendy clothes. According to the Environmental Protection Agency, textile waste increased 38 percent between 2000 and 2011 — a rate more than three times the overall waste volumes for all materials. The agency says the production, use and disposal of more than 19 billion garments per year is causing significant environmental and health problems.

The Council for Textile Recycling reports that an incredible 85 percent of America’s used clothes goes to landfills. Just 15 percent is recycled or donated. Of the clothes that are recycled, 45 percent go to secondhand clothing stores, 30 percent are cut down and used as rags, and 20 percent are ground down and reprocessed (5 percent is considered unusable).

For its part, Cotton Incorporated started the Blue Jeans Go Green™ denim recycling program 11 years ago, an initiative the firm describes as a “call to action to give old denim new life” by recycling it into natural cotton fiber insulation. Since its inception, the program has collected more than 1.5 million pieces of denim, enough to make a denim path the length of California. This also means 750 tons of textile waste — about the weight of 400 cars — was diverted from landfills. Instead, 2.7 million square feet of UltraTouch™ Denim Insulation, enough to line 46 football fields, has been produced.

This year, various colleges throughout the country are participating in the Blue Jeans Go Green™ program, as are Rag & Bone and Madewell stores. The retailers are offering $20 or 20 percent off new denim purchases in exchange for the worn items.

Low-priced, über trendy fast fashion has been largely blamed for the rapid increase in apparel waste. That’s led H&M to attempt to combat the problem with a number of initiatives. It has in-store drop-offs for used apparel. And it’s created collections from recycled clothes. Additionally, H&M’s Conscious Foundation began the Global Change Award a few years ago, to challenge fashion innovators to create breakthroughs that will make the industry more “circular,” as in sustainable, especially with regard to recycling. H&M stated in 2016 that just 0.1 percent of all apparel that’s collected by charities and recycling programs is turned into new apparel textiles.

Van der Put says the sustainability message is resonating more than ever.

“The story of the high environmental footprint and enormous end-of-life landfill consequences in apparel is gaining traction with the growing group of consumers that are aware of the need to transition to sustainable development models,” he says.

Currently, 82 percent of Americans recycle cans, bottles and paper, while 65 percent recycle apparel or textiles, according to the Cotton Council International (CCI) and Cotton Incorporated 2017 Global Environment Survey. When asked why they recycle their used clothes, most respondents said, “Simply because it is the right thing to do.” 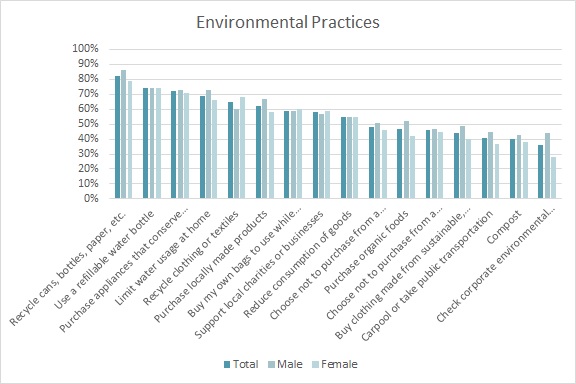 Van der Put says, though, that the impact of these programs is still limited, even though the number of initiatives is growing. This is because “the business scale versus ‘conventional’ materials is still very limited, hence the impact, too. However the sector will continue to find economically viable ways to scale these practices. Before some of these initiatives have economic and replicable scale, a lot of early stage innovations need to be encouraged and explored.”

On America Recycles Day, those consumers looking to recycle their used apparel can bring them to locations listed on the AmericaRecyclesDay.org site.

Whether the clothes are reused or turned into another product, the industry’s recycling efforts will help consumers feel better about clearing so many items from their closets and drawers. One of the latest actions comes with the launch of the Apparel Impact Institute. The new collective includes the Sustainable Apparel Coalition, the Sustainable Trade Initiative, Target, PVH Corp., and Gap, among others. The aim is to work with brands and manufacturers “to select, fund, and scale projects that dramatically improve” the sustainability impact of the apparel and footwear industries.

Increased participation by retailers and brands that join forces is key to growing sustainability momentum, Van der Put says. “And initiatives like the newly launched ‘Apparel Impact Institute’ can play an important role in that.”