It’s interesting when something old becomes new again. Take livestream shopping, the latest trend in ecommerce. It involves a host demonstrating products and responding to viewers’ question in real-time, usually on a smartphone. One could argue it sounds like QVC or HSN, two shopping channels that were introduced in the ’80s. But today’s livestream shopping puts a modern, interactive and entertaining spin on it, something that’s especially appreciated in the era of COVID.

“Consumers have evolved beyond scroll-and-click online product feeds and are hungry for more experiential online shopping,” said Ann Miura-Ko, co-founding partner at Floodgate, a seed stage venture capital firm that has backed PopShop Live, as well as companies like Lyft, Twitch and Twitter. “Popshop Live is the first product that fully delivers. Danielle [Li, founder and CEO] and the Popshop Live team have created the best consumer shopping experience at a time when community and virtual connectedness are needed more than ever.”

Popshop Live combines social media, ecommerce and entertainment in one platform so shoppers can discover new brands and shop in real time from the comfort of their own home.  Sellers can interact live with the shoppers through video, and shoppers can ask questions or make remarks in the comments. The platform is currently available only for iOS, but it’s developing an Android app. It’s also invitation-only for now, but the team plans to open it up to the public this summer. Popshop helps brands set up their live shops, and preps and markets their first show. The platform also manages payment and shipping details, and provides sellers with sales and engagement stats.

Popshop sellers only need an iPhone or iPad to go live, although the platform recommends they use a ring light, as well. Their shop has to be open a minimum of one hour but Popshop says, “it’s common that our sellers go live for up to 7 hours.” There is no limit to how many products a brand can list, and audience size can range from 10,000 to 100,000 viewers.

“The best brands today provide multi-touch shopping experiences and most have a media component with a tribe-like following,” said Popshop’s Li. “The brands that will stand out in the future will offer their customers experiences beyond products and content, mainly emotional connections and a sense of community. Our vision is to empower the next generation of sellers with the tools needed to provide this to their followers.”

A new and inviting style of shopping could not come at a better time for apparel brands and stores. July retail sales of clothing and accessories were down 21 percent year-over-year, according to Statista. This follows decreases of 23 percent in June, 62 percent in May, 87 percent in April and 50 percent in March. And Morgan Stanley research shows foot traffic to stores selling discretionary goods, including apparel, has decreased by as much as 43 percent since stores have re-opened, according to The New York Times.

Morgan Stanley’s research is in line with the 45 percent of consumers who say they are shopping online more now than before the start of the pandemic, according to the Cotton Incorporated 2020 Coronavirus Response Consumer Survey. More than 6 in 10 (63 percent) say it’s because many physical stores are closed. Consumers also feel it’s safer (57 percent), they’re online more often now (50 percent), they feel online shopping is fun (41 percent) and it’s something they do when they’re bored (28 percent). 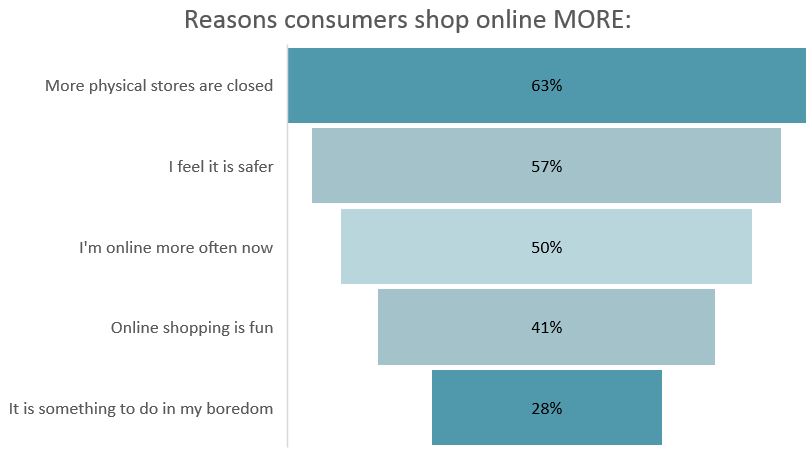 Although consumers say they’ve increased their digital clothes shopping, 53 percent of consumers say they’re spending less on clothes than before the pandemic began, according to 2020 Coronavirus Response Consumer Survey. The result has been devastating for retail: After struggling for years, many stores — including Macy’s, JC Penney, Nordstrom, J. Crew, Brooks Brothers, Chico’s and Neiman Marcus — find themselves filing for bankruptcy, closing stores or shuttering permanently. All told, 20,000-to-25,000 retailer closings are expected in 2020.

But livestream shopping could potentially turn the tide. Already, it’s been attributed with providing a lifeline for China’s retailers. Livestream shopping is already so hugely popular in China, it’s projected to generate $129 billion in 2020 revenue, according to Rockwater Industries, a management consulting firm. That would be an eye-popping 453 percent jump in growth from 2018.  The firm says Taobao Live, which is owned by Alibaba, is the premier livestream shopping site in China, and is expected to sell to 500 million-plus shoppers and generate more than $500 billion in the next three years. It markets products from more than 100,000 brands, including Levi’s and Ralph Lauren. And in a just few short years, China’s livestream commerce has created stars, like Viya who reached 37 million live viewers on Singles Day last November — an audience far bigger than the Oscars or Sunday Night Football — and generated $425 million in sales.

“Influencers generate buzz around products, as well as consumer trust, via engaging and interactive, personality-driven broadcasts,” Rockwater states. “These can last several hours and are similar to how U.S. gamers host Twitch streams. Trusted hosts demonstrate a product and describe why they love it, answer real-time questions from viewers about issues like fit and feel, and then countdown to the sale, at which point a limited inventory is made available at a steep discount. Once the sale is live, graphic overlays provide real-time updates on the limited supply available, until it’s all sold out…and the host moves on to the next product.”

Here in the U.S., nearly three-quarters of all consumers (73 percent) say living through the COVID-19 experience will change the way they shop in the future, according to the 2020 Coronavirus Response Consumer Survey. And nearly half (48 percent) say livestream shopping events would make them “somewhat/much more likely” to shop for clothes online, according to Cotton Incorporated’s 2020 Spring U.S. Survey. Since the start of the pandemic, 14 percent of consumers who had never tried livestream shopping before took the opportunity to test it out.

“With Alibaba’s livestreaming, you create a three-dimensional, live, interactive, mobile and social shopping experience,” says Mark Yuan, CEO and co-founder along with Zoe Zhang of And Luxe Inc., a livestream commerce consultancy based in New York. The company has worked with hundreds of U.S. and European brands to help them present their products on Alibaba in China. “We believe livestreaming is the future of retail and ecommerce.”