The potential held by China’s enormous population never fails to quicken the pulse of retailers.  And e-commerce, especially via mobile devices, is one of the hottest avenues for doing business there.

[quote]”It is bridging the consumption limitation gap between big and small cities,” Chen says.  “Depending on the category and brand status, this could change the economic equation for doing business.”  ­

Apparel is the top item to buy online for more than three-fourths (77%) of Chinese consumers, outranking other product categories like electronics (69%) and cosmetics (50%), according to the Cotton Council International and Cotton Incorporated Global Lifestyle Monitor.

The report was leveraged with data supplied by the Alibaba Group Research Center and Taobao UED User Research, both of which are part of Alibaba Group.  Despite growing competition, Alibaba remains China’s e-commerce leader.  In 2012, about 212 million people shopped on Taobao, Alibaba’s consumer-to-consumer site, which is like eBay, while 155 million used Tmall, its business-to-consumer site that is comparable to Amazon.

“Transaction volume is being heavily fueled by online spending in China’s third- and fourth-tier cities, where e-commerce sales have been growing 60% year-over-year in 2012, compared with 40% growth in the country’s largest cities,” the spokeswoman says.  “Regions such as Sichuan, Henan, Hubei, Hunan, Chongqing province and so on are increasingly turning to online retail. The largest registered user demographic on the Taobao platforms is in second-tier cities (approximately 36%).”

The percentage of Chinese consumers who use the Internet as a source for clothing ideas has risen steadily (71% in 2012, up from 16% in 2003), according to the Global Lifestyle Monitor.  Not only are shoppers going online to buy apparel, but they are also using it to read customer reviews (59%), compare prices (59%), and browse the latest styles (58%).

Roy says even though annual sales growth has slowed along with the country’s GDP, e-commerce is a retail force.

“While annual retail sales growth used to regularly be in the 16-to-18% range, it slowed to 14.3% in 2012 and looks to be slowing to 12-to-14% for this year,” Roy says.  “While this is impacting brick-and-mortar retailers, business-to-consumer e-commerce is taking off and will continue to grow rapidly as more and more consumers start buying online, and increase the amount they order once they get used to the idea.”

Roy says B2C e-commerce transactions by value increased by an average of 100% per year in the last two years, and CMR expects it to increase by more than 60% this year. 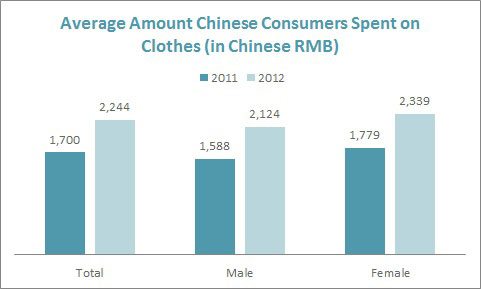 Roy says apparel is one of the top products for China’s e-consumers — and one of the earliest to catch on — because younger people found they could get more variety and lower prices than in traditional stores.

But to take advantage of the e-commerce boom, brands and stores have to do more than merely create a shopping site.

“You need to create visibility and awareness through a major online platform, social site or fashion blog,” says McKinsey’s Jennifer Schmidt, principal.  “And you have to figure out the right fulfillment model — from regional distribution centers in Asia versus direct from the U.S. or Europe — as the Chinese customer expects speedy delivery times.”

Perhaps one of the most important factors in China’s rise in e-commerce has been the increase in mobile shopping.  McKinsey’s report says the average Chinese smartphone user has a higher tendency to shop online, and smartphone penetration is likely to increase to 23% in 2015.

The China Internet Network Information Center says those tapping into the web from phones and tablets rose 18.1% to 420 million.  Mobile commerce should be aided by the fact that the world’s largest mobile carrier, China Mobile, plans to spend $6.7 billion this year developing 4G technology, making Apple’s iPhone and iPad compatible with its system.

While Roy says technical hurdles might take time to overcome, Alibaba says the value of mobile purchases already soared 600% last year on Taobao Marketplace and Tmall.com.  Its growth was fastest in third- and fourth-tier cities (180%).

Says McKinsey’s Chen, “China’s 3G experience is still below that of the U.S., but as sites improve and apps make mobile shopping easier, it should become a major source of future e-tailing growth.”