A Crystal Ball Would Be Helpful

"The Institute for Supply Management releases its Purchasing Managers' Index (PMI) every month, which is a gauge for how the manufacturing sector is doing in the U.S....In September, the PMI Index fell to 47.8 percent. That's the lowest percentage it's been since June 2009 and any reading below 50 signals a contraction."

Wow, is it time to break into “Auld Lang Syne” yet?

While retailers are still focused on the holiday season, which is expected to increase about 4 percent over last year, according to the National Retail Federation (NRF), varying economic indicators make it tough to pinpoint how consumers will feel about spending come 2020.

On the positive side, employers added 266,000 jobs to the U.S. market last month, according to the Labor Department, and the jobless rate dipped to 3.5 percent, tying with September as the lowest level since Richard Nixon was president back in 1969. On top of that, investors are hoping a “Santa Claus rally” could power Wall Street to its best year for stocks since the 1990s.

However, nearly two-thirds (61 percent) of Americans say 2019’s record-setting Wall Street rally had little or no impact on their personal finances, according to a poll by the Financial Times and the Peter G. Peterson Foundation.

Additionally, analysts at The Motley Fool say there could actually be a stock market crash and recession in the coming year. Talk about a needle scratching the record. Among the concerns: a contraction in U.S. manufacturing directly related to the U.S.-China trade war.

“The Institute for Supply Management releases its Purchasing Managers’ Index  (PMI) every month, which is a gauge for how the manufacturing sector is doing in the U.S.,” the investment firm stated in October. “In September, the PMI Index fell to 47.8 percent. That’s the lowest percentage it’s been since June 2009 and any reading below 50 signals a contraction.”

That probably isn’t what most Americans are expecting right now. About 3 in 10 consumers (31 percent) have a “somewhat optimistic” outlook for the U.S. economy, according to the Cotton Incorporated Lifestyle Monitor™ Survey. Another 18 percent have a “very optimistic” view. And 32 percent are neither optimistic nor pessimistic. On the other hand, there are the 20 percent who are “somewhat” (15 percent) to “very” pessimistic (5 percent). 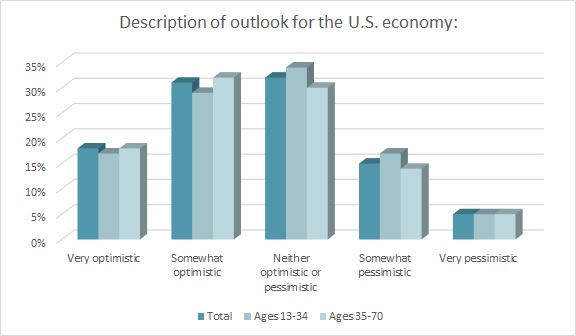 The latter group may be among those already feeling the effects of the tariffs. Labor Department data showed 22 states saw manufacturing job losses this year, including 8,100 in Pennsylvania, 7,700 in North Carolina, and 6,500 in Wisconsin.

That might explain why more than half (57 percent) of all consumers are “somewhat” (36 percent) or “very” (21 percent) optimistic about their own personal financial situation, according to the Monitor™ research. Another 28 percent are neither optimistic nor pessimistic. And 15 percent are “somewhat” (10 percent) or “very” (5 percent) pessimistic. Those with household incomes below $50,000 were significantly more negative in their viewpoint (21 percent) than their counterparts (9 percent).

Whether they have economic concerns or not, Americans overall are logging time and spending money online or in stores for their holiday shopping. The NRF and Prosper Insights & Analytics reported a 14 percent increase in the number of U.S. consumers who shopped between Thanksgiving Day through Cyber Monday, from 166 million last year to 190 million in 2019.

“Americans continue to start their holiday shopping earlier in the year, and Thanksgiving is still a critical weekend for millions,” NRF president and CEO Matthew Shay said.

On average, holiday shoppers plan to spend about $758 on holiday gifts this year, up 12 percent compared to $679 in 2018, according to the Monitor™ research. Clothes (57 percent) were the top gift holiday shoppers planned to give this year, followed by gift cards (52 percent), toys (48 percent), and electronics (32 percent). One in five consumers (20 percent) plan to spend more on clothes as gifts this holiday compared to last year.

Of those shoppers who intend to purchase apparel as gifts this holiday season, the Monitor™ data shows 44 percent plan to buy their gift in-store, a significant decrease from 64 percent in 2018, while 56 percent expect to make their purchase online, up from 36 percent last year.

Outside of holiday gifts, consumers spent about $1,032 on clothes for themselves in the past year, according to Monitor™ research. Men spent $1,191 compared to women’s $924. And overall when it comes to clothes shopping, 56 percent of consumers say they “love” (22 percent) or “enjoy” (34 percent) it.

The encouraging holiday start and consumers’ positive sentiments toward shopping should make for a favorable outlook. Whether or not these markers hold up through 2020 is a different story. The Conference Board’s Consumer Confidence Index decreased for a fourth consecutive month in November to 125.5. The Conference Board’s economic outlook forecasts improved business spending on equipment and structures, but softer consumer spending.

In contrast, the University of Michigan’s Index of Consumer Sentiment rose to a preliminary result of 99.2, up from 96.8 in November. The survey found that among households with incomes in the top-third of the distribution, “their overall assessment of their current finances was the third highest in the past 20 years,” largely due to increased stock prices. The Michigan survey expects a continuation of the economic expansion, based on consumer spending.