The big holidays are just days away, and retailers are in the final push to get their merchandise out of their stores and warehouses and into customers’ homes. Drumming up excitement should be easy, being that gift giving is a given at Christmastime. But experts say stores should be more attuned to what their guests really want, and how they want to purchase it.[quote]

Clothing gift givers plan to purchase about a third of their apparel gifts online (35%), with the other two-thirds of their clothing gifts to be bought in-store (65%), according to the Cotton Incorporated Lifestyle Monitor™ Survey. That figure has held steady for the past four years. 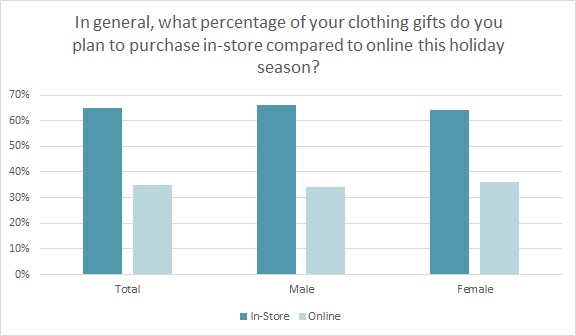 However, it’s not like consumers are just shopping at the online sites of their favorite traditional retailer. Amazon has been attracting more and more online apparel shoppers. Morgan Stanley reports that by 2020, Amazon could represent 19 percent of all apparel sales. Amazon is also projected to be the largest fashion retailer in the U.S. by 2020.

To fight back against the retail giant and improve sales both during the holiday and throughout the year, industry analysts say retailers need to amp up the consumer experience, both online and in-store.

The Christmas season brings traditional experiences like the visit with Santa and strolling carolers to stores and shopping centers. Alix Partners, the global advisory firm, found that some malls were employing new strategies to increase holiday traffic. Examples included one center bringing in world-renowned blues and jazz performers for a “Magic of the Night” holiday concert, while another did a food and drink pairing at a cosmetics counter — a true girls’ night draw.

At Westfield’s Garden State Plaza mall in Paramus, NJ, Santa, carolers, and performers have continued to be part of the center’s holiday mix. But this year, so has Facebook. The social media giant set up a pop-up space where shoppers can give VR headsets a try.

“Users will feel compelled to share their experience on Facebook, which is a good traffic driver for the mall since most people have never seen them – never mind tried them — before,” says Marie Driscoll, CEO of Driscoll Advisors, a retail consultancy. “Having Facebook right there also creates the impetus to share more — more of where you are and what you’re doing. “It might also serve to get the consumer more comfortable with shopping on VR — which is what the next iteration could be.”

Nearly half of all online shoppers (47 percent) planned to use social media sites to come up with gift ideas, up significantly from 35 percent in 2014 and 2015, according to the Monitor™. Among clothing gift givers who draw gift inspiration from social sites, data shows the majority use Facebook (69 percent), followed by Pinterest (62 percent) and Instagram (54 percent).

Cynthia Cohen, founder and president of the business strategy firm Strategic Mindshare, says she’s seeing a lot of newness this holiday in customized offers and communications.

“Some shoppers might be invited to a store event because they’re a highly valued customer, or the stores are giving more tools to their sales staff to communicate to you and entice you to come in,” she says. “Retailers are also working with vendors to create partnership for in-store events.”

The majority of apparel gift givers plan to shop at mass merchants (56 percent) and chain stores (53 percent — down significantly from 59 percent in 2015), according to Monitor™ data. This is followed by department stores (44 percent) and online-only sites (40 percent).

Driscoll says she sees retailers and brands investing more in their online experiences, with some brand story-telling and customer engagement going beyond the selling transaction.

“This is still in the early stages,” Driscoll says. “I’m as impressed with what brands like The North Face, Nike, Adidas, and Coach are doing in their flagships. For instance, at the new Coach House in midtown Manhattan, upon entering you are greeted by a 12-foot dinosaur and on the third floor you can create a bespoke Rogue handbag.”

Tis also the season for pop-up shops. Brands and designers are dotting cities with them from Manhattan to L.A. Even Amazon opened pop-ups — 22 across 12 states. But they’re primarily geared toward tech products — Echo, Dash Buttons, and Kindles.

“Pure play e-commerce retailers have to be where the customer shops,” Driscoll states. “If you’re selling diapers and toilet paper, online is a great, efficient way to shop; if you are selling apparel, accessories, luxury goods — discretionary, high-end items — sooner or later you need to provide the consumer with brand touch.”

Many of these click-to-brick retailers will find keeping things neat, tidy, enticing, and fresh is a whole new ball game. It might be as tough as going from a storefront to online retail.

“Consumers are used to the organization and efficiency of shopping online,” Rist says. “Now when they enter a store and find disorganization, messy aisles, or store employees who are not as knowledgeable as what you can find in the review section on Amazon, it creates a clang effect. Retailers have an increasingly uphill battle against the machine when online is presenting what is more commonly perceived as a better experience for shoppers.”

In a Winter WonderlandAll Eyes Ahead