New York Fashion Week just wrapped up the Spring/Summer 2019 shows, yet it’s mid-September. Despite regular discussion about the industry’s need for speed, and a consumer that has a see now/buy now/wear tonight mentality; despite the wall-to-wall coverage and social media postings from every show, the fashion week calendar stubbornly sticks to a time frame that is six months out from actual delivery to stores or consumer wear. However, the same can’t be said for Amazon. After disrupting so many industries, it’s got fashion clearly in its sights, to the point of holding a September fashion show, but selling the styles right from the runway. And being that it’s Amazon, consumers can fully expect the product to arrive ASAP, not in a different year.[quote]

What fast fashion retailers started when they began churning out product at an ever-more astonishing pace, Amazon is likely going to turn bionic. Amazon has its own private label brands. It’s the second biggest retailer in the world, according to the Forbes Global 2000 list and Morgan Stanley expects it will become the top player in the U.S. apparel industry this year, having gained 1.5 percent of market share last year. On top of all that, it offers free shipping to its Prime shoppers, which number more than 100 million paying members.

“Some people call that disruptive. I call it innovative,” says the Fashion Institute of Technology’s Shawn Grain Carter, associate professor in fashion business management. “It’s the consumers who are disrupting the industry, not Amazon. Now, the consumers are saying what to wear. They’re dictating. Previously, stores didn’t allow consumers to vote. That’s what is important. The consumer is changing the dynamic — especially the Millennials who grew up with technology. They said ‘This is how we’re going to shop or we won’t purchase your brand. We’re loyal to ourselves, not your brand.’ That’s shifted the business cycle in such a way that Zara and other fast fashion retailers like Forever 21 have product in stock immediately. And then customers want something fresh the next week. Customers are not waiting.”

Nearly 3 in 5 consumers (57 percent) wish clothes shopping was like video streaming TV or movies on Netflix or Hulu, “where I can get whatever I want, whenever I want it,” according to the Cotton Incorporated Lifestyle Monitor™  Survey. That number jumps to 66 percent among 13-to-24 year olds and leaps even higher to 73 percent among 25-to-35 year olds. 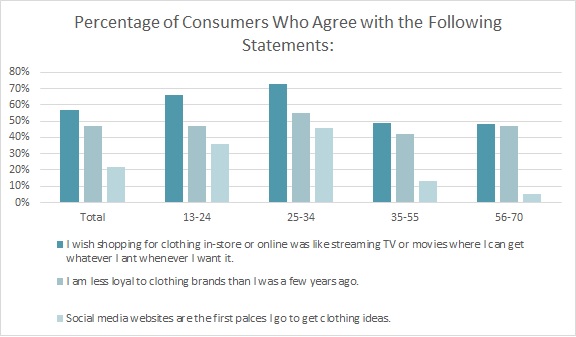 Further, more than half of Millennial survey respondents (51 percent) ask, “Why go to an actual clothing store when you can just buy clothes online anywhere, anytime?”

The international fashion weeks generate phenomenal interest in the latest style trends. And some designers actually are trying to change the calendar — but perhaps not in the way that shortens the time from runway to retail. Consider Alexander Wang showed his spring/Summer 2019 collection in June. The enormity and speed attached to Amazon’s approach might make it seem like others in the industry are participating in a slow clothes movement. However, some brands are on top of the game that is changing at an extremely rapid pace.

“There is a clear need for speed in fashion today, where the traditional product development model doesn’t work for fashionable products,” says McKinsey’s Sophie Marchessou, partner and a member of the firm’s apparel, fashion and luxury group. “Top performers are leveraging data analytics to develop and plan their lines. Whereas the typical lead time in the industry is more than 40 weeks, we’re seeing companies that can deliver a product to market in less than six to eight weeks. We’re entering the age of truly fast fashion.”

Marchessou says designers and brands are delivering both their new collections and replenishments to stores faster than ever.

“A lot of brands have reduced their calendar timeline, and can be more responsive to consumer trends and needs as a result. It is true for replenishment, but also for innovation, especially through the use of digital tools, like 3D design, or a fabric/trim toolbox that designers can work from,” she says. “Some successful players have also created two tracks – an accelerated track for fashion and testing purposes, and a more traditional one where they are comfortable leaving the longest lead time as is, for basics, outerwear, etc.”

There were designers who did try the see now/buy now approach to their runway shows, Rebecca Minkoff, Tom Ford and the still “paused” Thakoon label. But it took either deep pockets of major brands or the nimbleness of an indie operation to make it work. Even then, it was disruptive to the traditional system. The big names offered some pieces that were available immediately, with the rest offered the in season. Or pieces could be pre-ordered immediately, but not shipped for months.

But immediate delivery or even fulfilling orders within weeks of a show will be difficult for most, Marchessou says. “Most players probably would not be able to fulfill that rapidly. There would also be a question of financial commitments and who bears the risk. Right now, retail partners and wholesalers are making the financial commitments ahead of production time.”

More than half of shoppers (57 percent) aged 13-to-34 say they wish apparel brands and retailers knew more about what they like and how they shop, according to Monitor™ research. And 43 percent of this group would like if stores and designers focused more on the local trends and styles of their particular city.

FIT’s Grain Carter says smart fashion brands won’t wonder how they can compete with Amazon. “They’ll ask, ‘Where’s a void and how can I dominate the market in that sector?'”

FIT has partnered with First Insights to offer fashion students courses in data analytics. It’s part of their coursework that gives students a background in innovation, technology and research. Grain Carter says brands will learn, if they haven’t already, to be very flexible. This means having key collections for direct-to-consumer selling, capsule collections for immediate speed-to-market or deliveries that ship in two weeks rather than four.

“Before, you had to wait and have fittings. But with 3D printing and CAD (computer aided design), it makes the process of putting it out faster,” Grain Carter says. “If you’re doing 100,000 units of an item in a certain color, unless you have a vertical operation you won’t be able to do speed-to-market. But you can tell people, ‘Keep those gray goods, dye it like this, and work through Labor Day to get it out there.’ They can communicate to their team in China or Brooklyn, do a sketch on the computer and then it’s a matter of having quality control people do size specs, making sure it’s correct and moving the product out. Tech is also helping production speed delivery. But if you don’t have factories that do it for you, you will still have the same challenge.

“Fashion is not for the faint of heart. You have to put your soul into it, pay your dues and work hard. This business demands it.”