It’s hard to say how school, events, work and retail will look in the coming months, what with COVID’s Delta variant impacting protocols on a seemingly daily basis. But for brands, retailers and marketers who are aiming to reach the Gen Z shopper, it’s no time for uncertainty. This generation is maturing, as is its buying power, making it more important than ever to cultivate loyalty despite the stops, starts, and potential for more disruption.[quote]

Generation Z is generally defined as those born from 1997 to 2015, meaning they now range in age from 6-to-24. Despite the fact that most of them aren’t old enough to drive, never mind hold a credit card, these young shoppers number about 70 million in the U.S. and have a combined spending power of $150 billion, according to the 5WPR 2021 Consumer Culture Report.

“Being among the most vocal and socially active, connecting with Gen Z will be an important relationship for brands looking to emerge into a struggling market,” said 5WPR’s Ronn Torossian, founder and CEO, earlier in 2021, adding that this generation is most adamant in its belief that companies they buy from align with their values.

Jason Dorsey, president and co-founder of the Center for Generational Kinetics, says companies should expect Gen Z to hold their feet to the fire when it comes to social causes.

“For the last several years, the most important social cause to Gen Z has been combating climate change or protecting the environment. However, this year our research revealed a rapid shift where racial equality and social justice jumped to the top spot,” Dorsey writes in MarketWatch. “This trend looks likely to continue given the emotional connection to the generation, and will have a big impact on brands, companies and investing — such as environmental, social, and governance (ESG) — for decades to come.”

Nearly half of all Generation Z consumers (43 percent) say they actively seek clothes or companies that have sustainable or environmental practices or a solid reputation around sustainability, according to the 2020 Cotton Incorporated Lifestyle Monitor™ Survey. Further 74 percent of Gen Z shoppers say clothes made primarily from cotton are the most sustainable or environmentally friendly. That compares to 17 percent for polyester and 9 percent for rayon. 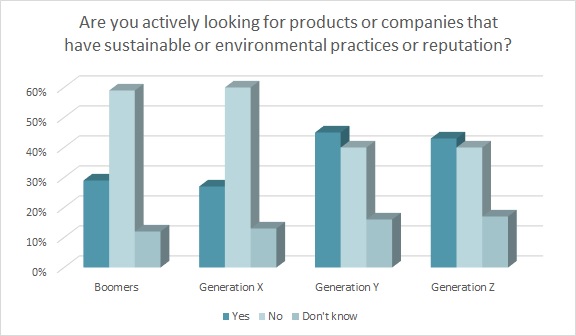 In the Salesforce report, “State of the Connected Consumer,” the company found that while 61 percent of Millennials say companies generally come off as authentic, just 53 percent of Gen Z consumers feel that way.

Kognitiv, a business-to-business technology platform, says a strong commitment to ethical and environmental policies stands to benefit brands, as 79 percent of Gen Z is willing to engage with a brand that could help them make a difference. That initial engagement can lead to long-term loyalty.

On the other hand, attaining that initial engagement can be tricky, as fashion’s online scope is sweeping. In its report, 5WPR found 65 percent of consumers say shopping online allows them to buy products from new or small companies they couldn’t find in stores. That percentage increases significantly to 77 percent among Gen Z shoppers. Consumers are influenced by the channels they regularly visit online, especially the younger set. While 54 percent of consumers still haven’t bought something they saw on social media, nearly 6 in 10 Gen Z shoppers have done so. Further, 11 percent of Generation Z shoppers bought directly from a brand’s Instagram page — multiple times. And gaining real traction this year: TikTok. Its popularity has grown to where 28 percent of Gen Z has made a purchase once or more from the platform.

That’s in stark contrast to last year, when TikTok was the least used social media site among all age groups, according to 5WPR. Now, 25 percent of Gen Z shoppers start browsing for clothes on the channel, according to Monitor™ research. Instagram, though, remains the most popular online site for young apparel shoppers (43 percent), followed by search engines like Google or Yahoo (35 percent), YouTube (26 percent), retailer or brand websites (25 percent), ecommerce-only sites like Amazon or Etsy (16 percent), Pinterest (16 percent), and fashion or trend websites (14 percent).

For this reason, a report from Octane AI says discovery is essential. The company recommends brands increase their online recognition with SEO, influencer marketing, reviews, paid ads, and social media.

While online browsing and ecommerce grew tremendously during the pandemic, 64 percent of Gen Z consumers prefer to actually purchase clothes in a physical store, according to the Monitor™ data. Once all stores can return to capacity and consumer confidence climbs again, Salesforce says this group may trickle back into stores a little more than Millennials.

“Think about how you can bring more teens into your stores (if you have physical locations) with educational or social media-worthy experiences once stores are safe,” Salesforce’s Young says. “Gen Z will most likely remain keen on unique experiences that happen in stores — like exercise classes at an athleisure apparel store.

“Understanding each audience helps us craft the right message on the right channels, and a deep demographic dive is especially important if young people comprise a big portion of the audience you market to.”