It’s been more than a year since COVID-19 shut down life as we knew it. But, now that 40 percent of the U.S. is fully vaccinated, and half the country has had at least one dose, according to the Centers for Disease Control, there are signs that American life returning to some semblance of normalcy. And that means there’s some good news for the apparel industry.[quote]

“New York City is relatively open and I’ve seen lines out the door at stores in Soho,” says Edited’s Avery Faigan, a New York-based analyst for the fashion and retail data analytics firm, on a recent company podcast. “There’s limited capacity in stores but people are still yearning to get out, even if they have to wait in line. I think retailers can kind of leverage the days getting longer and lighter, and people just feeling energized to go back out.”

Zenreach, a marketing solutions provider, confirms shoppers just want to have fun with data showing bars and nightclubs have experienced a 33 percent increase in foot traffic since the beginning of this year. This marks a 10 percent increase over June 2020, as well. The firm points out, though, the industry still has a long road to recovery, as visits are still down 63 percent compared to January 2020, which was two months before the pandemic was declared.

“The Q1 data leaves us very optimistic about consumer foot traffic throughout spring and leading into summer,” states Zenreach’s Megan Wintersteen, vice president of marketing. “Barring any unforeseen setbacks, we anticipate that these trends will continue to gain momentum moving forward.”

As of mid-May, 64 percent of all U.S. adults said they feel comfortable going to a restaurant, according to Morning Consult, a data intelligence/market research company, and 77 percent expected to feel relaxed dining out within six months. Americans are also comfortable returning to movie theaters (44 percent), museums (51 percent), amusement parks (44 percent), and performance theaters (39 percent).

Fashion stores and brands can appeal to consumers’ newfound optimism about venturing out again with clothes that match their excitement. Maximalist offerings featuring colorful patterns, as well as standout accessories, will likely attract female customers, according to Trendalytics, the predictive data and retail analytics platform. In fact, interest in maximalism has grown 78 percent since last year. Women have also shown an increased interest in intarsia knits (62 percent), as well as patterned pants (4 percent). The Trendalytics data shows men’s interest in casual pants has increased significantly (47 percent) since a year ago, as has their interest in pink suits (44 percent) and casual suits (36 percent).

Consumers would prefer these warm weather garments be made of cotton, as — when compared to manmade fibers — it’s considered the most comfortable fiber (84 percent), softest (84 percent), most sustainable (82 percent), and highest quality (75 percent), according to Cotton Incorporated’s 2020 Lifestyle Monitor™ Survey. 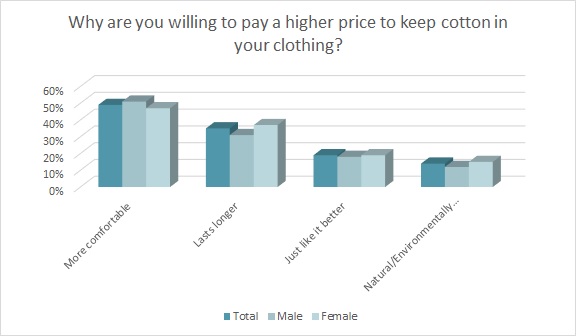 The Monitor™ data also shows nearly half (49 percent) are willing to pay a higher price to keep cotton in their apparel because cotton clothes are more comfortable, while a third (35 percent) say it lasts longer and 14 percent say it is natural/environmentally friendly.

After being holed up in their homes for more than a year sporting a steady stream of cozy loungewear and pajamas, consumers are ready for real fashion, say the analysts at Stylus, a trends intelligence agency. The firm’s team picked classic prints like spots and florals, and traditional pieces like a trench coat as holding appeal for spring/summer ’21.

“Even before the COVID-19 pandemic, streetwear and athleisure were major fashion influences and people were dressing down more, embracing the joy-of-missing-out and choosing online socialization,” Daswani told the CBC. “A lot of that really came from this desire for comfort.” Looking forward, she doesn’t expect that approach to change too much.

This inclination toward comfortable spring and summer apparel carries over to fabric preferences: 80 percent of consumers describe cotton clothes as breathable, according to Monitor™ research. This is followed by 66 percent who say it keeps wearers cool and 63 percent who say it’s hypoallergenic.

Edited’s Faigen says retailers should be sure to promote apparel that has these types of technical features in their outdoor stories or as festival clothing, since some music festivals will be taking place this year.

The Generational Denim WarsCOVID-19 & Consumer Concerns in the U.S.