Unless you were lucky enough to hit Coachella or Miami last month, there’s a good chance you were wearing a winter parka for a good part of April. It was honestly hard to see what was trending as far as spring fashion. But now that the temps have regularly risen above freezing, it’s clear that athluxury and streetwear, fun sleeves for women, western influences for men, and denim for all are leading spring styles.[quote]

“The two biggest trends from my European trip are athleisure and denim,” says Roseanne Morrison, fashion director for The Doneger Group. “They just get more and more floor space, adjacencies, and inventive pieces.

“In athleisure, it’s athluxury, with better fabrics, better colors, and better pieces,” Morrison says. “We saw things coming out of Coachella, like tear away pants with a great bustier. In denim, it’s the high-rise waistlines, the exposed buttons. The denim jackets have feminine, sexy appeal. The whole dip-dyed, tie-dyed effect is kind of fresh from a designer label, as are the the pastel colors like mint green, peach and sky blue.”

The Fashion Institute of Technology’s Lisa Kesselman, assistant coordinator of enterprise studies, says another Spring 2018 trend is that of streetwear being paired with regular apparel, especially among Millennials, but ranging from Gen X to Gen Z.

“It’s blue jeans with a really funky shirt and a certain baseball cap, or a pair of overalls,” Kesselman says. “The colorways for men are played down, almost drab. But for ladies, it’s vibrant purple and red. And they’re mixing in other colors like green, but it’s not chatreusy. There’s also a lot of layering and texture going on.”

Morrison adds that another very strong message comes from the print and pattern category. “Moving into high summer, the whole tropical print story is big. And florals and stripes are big. We’re in a really big print cycle and that adds to the color story, making summer offerings really visual and graphic.”

Compared to manmade fiber clothing, the overwhelming majority of consumers say cotton clothing is the best for T-shirts (90 percent) and casual clothing (80 percent), according to the Cotton Incorporated Lifestyle Monitor™ Survey. All year round, more than 4 in 5 consumers (81 percent) say cotton is their favorite fiber to wear. It far surpasses others, the next being polyester with 3 percent, followed by silk (2 percent), and Spandex, rayon, linen, and wool (all 1 percent). 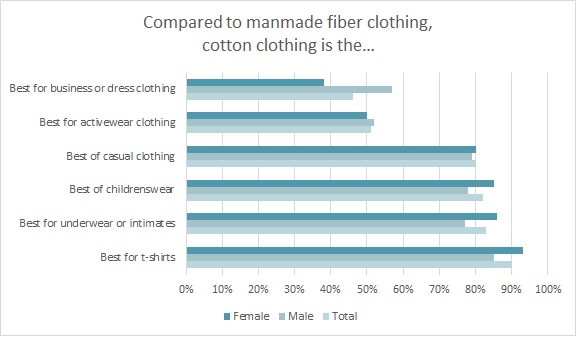 Further, consumers are willing to pay a higher price to keep cotton in their apparel because they feel cotton clothes are comfortable (91 percent) and keep you cool (78 percent), an important factor to consider in warm weather garments, according to Monitor™ research.

“People are having more fun with dresses,” Fraser says.” Monse had fun sparkly jersey dresses and now everyone is doing them. As far as length, it’s all about the maxi skirt, although the high-low hemline is still very much here. We’re seeing florals but that’s not groundbreaking for spring. But we are seeing more stripes, both horizontal and vertical. They’re both big and wide and pinstripes, for men and women.”

Of course, it wouldn’t be the Wild West without denim, and denim is a strong trend for spring. Music festival garb is only helping to propel it forward, as concert goers seem to find newer and ever-more fascinating silhouettes for denim, ranging from tiny lace and denim shorts to impossibly shredded, high-waisted boyfriend jeans, bell-sleeved denim crop tops, and endless jacket styles.

The newness in denim will be welcomed by most consumers as nearly two-thirds (61 percent) say they wear denim jeans or shorts at least three times a week, according to Monitor™ research. While the majority get ideas for new denim purchases from what they already own and like (53 percent), almost 4 in 10 shoppers (39 percent) are influenced by retail displays or shopping around in stores.

“Denim is not going anywhere,” says Kesselman. “We’re seeing denim being mixed in this season more than ever. Instead of just ripped denim, we’re seeing it inlaid with frayed pieces. The bottom edges are raw. We’re seeing natural finishes and a little stonewashing. We’re also going back to wide legs and a lot of straight legs.”

Alas, while denim may be coming on strong, one of the surprise hits of the last couple of summers, the cold-shoulder top, may be getting edged out.

“The cold shoulder is down trending but off shoulder is really important,” Morrison states. “A lot of times what’s prettiest is the puff sleeve that can be pulled off shoulder so it’s still out there but different.”

“We’re seeing bell sleeves, ruffle sleeves, tiered ruffled sleeves. There’s been a lot of maximalism,” Fraser says, going on to explain the current sleeve fascination. “We did the sequins, the crazy patterns. Designers looked around and said, ‘What’s the next frontier?’ So, this season, we’re still seeing some cold shoulder, but people also want their voluminous sleeve.”

Tons & Tons of Denim Kept from LandfillsDenim Is Seeing a Revival