It comes as no surprise to those in the garment business that the U.S. retail market is going through a change. Consumers are spending less on products and more on “experiences,” preferring vacations over wardrobes, to the point some malls are being recreated as community colleges or indoor parks. So it should come as no surprise that brands are looking to developing markets like China and India to take advantage of the growth potential in those areas of the globe. After all, the possibilities are enormous.[quote]

Here in the U.S., the population stands at 321.4 million people. U.S. consumers are spending 65 percent of their discretionary dollars on things like vacations and sporting events, up from the low-40 percent range 60 years ago, according to a Wells Fargo analysis. Meantime, spending on apparel has decreased from 26 percent of discretionary spending to 11 percent. The Congressional Budget Office expects real disposable income to drop from 2.5 percent last year to an average of 2 percent in the next two years.

In contrast, China has a population of 1.37 billion, while India counts 1.3 billion residents. China’s disposable personal income has grown at average annual rate of 11.5 percent, while India’s has seen a 7.5 percent increase, according to an analysis by Deloitte University Press. The difference is staggering — yet very enticing to brands that have the time, money, and ability to navigate the business landscapes of each country.

From activewear to luxury brands, more and more major apparel players have entered or are readying to enter the markets. Under Armour is looking to become a billion-dollar business just within China. Last fall, UA’s founder and CEO Kevin Plank told the South China Morning Post, “In China, we have put in everything we have to make it great.” Adidas recently launched its “One in a Billion” Chinese campaign, aimed at encouraging individuality among the nation’s young competitors.

In China, 83 percent of consumers “love or somewhat like” shopping for clothes, according to the Cotton Council International (CCI) & Cotton Incorporated Global Lifestyle Monitor™ Survey. Almost half of all consumers there (49 percent) say clothes are their favorite item to shop for, followed by electronics (15), groceries (11 percent), cosmetics (8 percent), and shoes (7 percent). 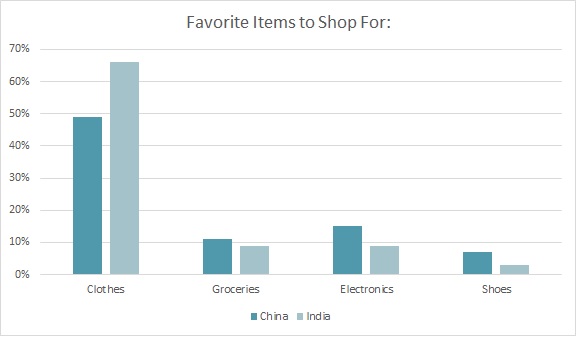 Another point that makes China such an interesting market for apparel brands is that they are frequent clothing shoppers, with 68 percent shopping for apparel for themselves once a month or more, according to Monitor™ data. But retailers and brands should take note: Chinese shoppers mostly prefer to buy their clothes online (79 percent), followed by department stores (76 percent), and specialty stores (51 percent).

Additionally, the bulk of Chinese consumers say they buy clothes on sale, but other factors like quality are more important than price alone, according to the Monitor™. Just 8 percent say they’re willing to sacrifice quality to get a better price. The most important apparel purchase driver is fit (92 percent), comfort (92 percent), and quality (90 percent).

In India, even more consumers (91 percent), express that they “love or somewhat like” apparel shopping, according to the Monitor™ research. And 66 percent cite it as their favorite items to shop for, outstripping groceries and electronics (both 9 percent), cosmetics (8 percent), and fashion accessories (4 percent). However, just 25 percent shop for clothes for themselves once a month or more, and instead prefer to shop once every two-to-three months or more.

India is also very different from China in that its most popular shopping channels are independent stores (68 percent), hypermarkets (66 percent), department stores (47 percent), and street markets (33 percent). Just 17 percent of shoppers make their purchases online, according to the Monitor™ research. Data show Indian consumers have substantial concerns about shopping online, including the availability of clothes they want to purchase, not being able to try or touch the apparel, and the quality of the clothes purchased from the web (each 66 percent).

Brands and retailers looking to enter or expand in the Indian market should note that the Monitor™ research shows 82 percent of shoppers buy clothes on sale “at least some of the time.”

But 45 percent of Indian shoppers purchase on impulse.  And the Monitor™ finds shoppers there are drawn to clothes that are eco-friendly. India has a high percent of consumers (78 percent) who say they put an effort into finding environmentally friendly apparel. Almost all (92 percent) say cotton production is safe for the environment, far above the highest artificial fiber (by nearly 20 percentage points).

A.T. Kearney put India in the top spot in its ranking of the most promising markets for retail expansion.

“The 2017 GRDI (Global Retail Development Index) is all about the geopolitical scene and how it affects business,” says Hana Ben-Shabat, an A.T. Kearney partner and a co-author of the study. “Retailers are thinking twice about expansion into places where there is uncertainty about future government actions or high political risk.”

For its part, Reebok India is looking to expand its reach throughout the country. The company is looking to set up single brand retail stores. Currently, Adidas AG sells Adidas and Reeboks clothes and shoes in India. Reebok India recently submitted a proposal to the Department of Industrial Policy and Promotion. It’s been years in the making, with exploration into India’s regulations for single-brand retail discussed as far back as 2013 by then-managing director Erick Haskell.

A.T. Kearney points to India’s strong GDP growth, growing middle class, and a more favorable regulatory environment that has developed over the past few years as reasons for its ranking. However, the firm says China’s size and the continued evolution of retail “still make China one of the most attractive markets for retail investment.”

The Buzz Behind ActivewearWanting the Experience