The dry spell that has affected corn and soybean prices may spell rising prices for food products next year.  However, apparel prices could be expected to be flat to down in coming months thanks to record cotton stocks and low and stable cotton prices.

Given high prices for food crops, the USDA forecasts consumers may see an increase of 3%-to-4% in prices for meat and dairy products in 2013.  After facing a shock a couple years ago from the spike in cotton prices, commodity-based cost pressures in apparel supply chains have been easing and may eventually lead to lower consumer prices for apparel.

IHS Global Insight’s Chris Christopher, senior principal economist for the consulting firm, says although current low and stable cotton price levels might be surprising considering its historic rise in price two years ago, its benefit will be welcomed by consumers.

Christopher says, “I think you’ll see more people looking for a good deal on their clothes because of rising food prices.  And increases in gas will compound that, as well.”

Even though food and gas prices are increasing, housing is finally stabilizing.  But the American Institute for Economic Research’s Zinnia Mukherjee, research fellow, says rising food and gas are likely to affect consumer apparel spending more than positive housing prices.

“Food prices are more of a concern for any household since those consumption choices cannot be deferred and are likely to bear the brunt of rising prices,” Mukherjee says.

"I think you'll see more people looking for a good deal on their clothes because of rising food prices."

According to the U.S. CPI for apparel (excludes footwear), the inflation rate reached a high of 5.8% in March of this year.  In more recent data it has dropped to levels near 3% and is expected to fall to those below 2% in coming months.

Among consumers who have purchased apparel for themselves in the past six months, 67% noticed prices increased from last year, according to the Cotton Incorporated Lifestyle Monitor™ Survey.

Even if consumers have seen a price increase on their apparel, it was not enough to dissuade them from buying new clothes.  Moody’s Investors Service reports apparel brands and retailers can expect 2%-to-3% increases in third-quarter sales.

If they had to pay more, consumers felt better about it if the apparel was made from cotton: 87% say clothes made from cotton are good quality, followed by cotton/polyester blends (70%), cotton/rayon blends (62%), and wool (61%), according to the Monitor.

Unfortunately, 40% of consumers feel apparel quality has decreased in the last year, the Monitor shows.  Among those who have purchased apparel for themselves in the past six months, nearly half (46%) say many of the clothes that used to be made from cotton now seem to be made from other fibers.

A number of manufacturers and retailers employed fiber substitution when they feared cotton’s soaring price would send retail prices through the roof.

In early 2011, cotton was trading at a record high of more than $2 per pound, after decades of being priced at the $0.60 level.  The spike in prices led to a record level of global cotton acreage and record world harvest.  Combined with weakness in demand, the increase in prices led to record cotton stocks.  In turn, these plentiful supplies have led cotton prices lower.

Looking ahead to next year, despite startlingly dry conditions in many regions of the country, the U.S. cotton stocks are expected to remain high, says Cotton Incorporated’s Jon Devine, senior economist.

“Cotton is relatively drought tolerant, which is why it can be grown without irrigation in areas like West Texas,” Devine explains.  “Although conditions in Texas remain dry, there has been at least some rainfall there during the 2012/13 growing season.  It is expected that the U.S. will harvest about 13% more cotton this fall than it did last year — despite the fact that U.S. cotton farmers planted about 14% fewer cotton acres.”

The increased harvest may face some difficulty finding a market considering U.S. cotton exports are expected to be only marginally higher in 2012/13.  This is primarily due to slowing import demand from China, the largest customer of U.S. cotton. Consequently, U.S. ending stocks of cotton are projected to increase by more than 50%  in 2012/13, which could be expected to pull both U.S. and world prices lower.

With these lower cotton costs, Moody’s expects brands and retailers to grow operating earnings 8%-to-10% from year-ago levels.

Cotton’s lower cost means manufacturers and retailers can comfortably return to all-cotton or cotton rich materials if they had been substituting cotton with other fibers.

Consumers would appreciate this.  More than 6 of 10 consumers (63%) are bothered that brands and retailers may be substituting synthetics for cotton in their T-shirts and jeans (59%), the Monitor shows.  In fact, they are so down on fabric swapping that most consumers would pay a slightly higher price to keep cotton from being substituted with synthetic fibers in their denim (62%) and T-shirts (61%). 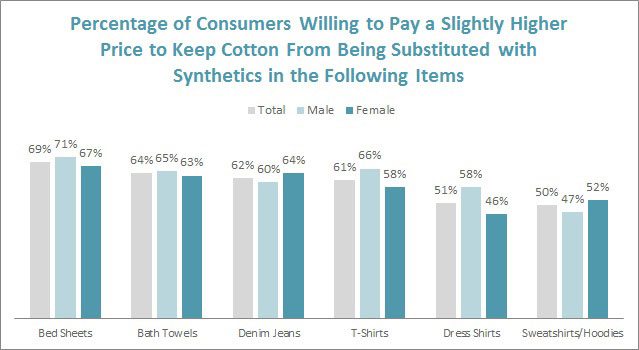 Devine says there is going to be enough cotton to keep consumers happy, with no price pressure for brands and retailers.

“With last crop year’s record harvest, the amount of cotton stored in the world’s warehouses reached a record high,” Devine says.  “Following this year’s expected surplus, cotton stocks should set another record.  It could be expected that world cotton prices will continue to be stable and low.”

Let’s Hear It For the Home Team

How many pairs of jeans do consumers own?