A zany thing happened on the way out of the recession: more and more men have begun investing in fashion.  In turn, retailers have had to amp up their offerings to continue to woo this increasingly savvy group.

The NPD Group’s Marshal Cohen, chief industry analyst, says stores need to figure out how to give to men the same experience they have been trying to give women.

“Men are socially shopping, and it’s part of their leisure activity,” he says.  “It’s not a chore.  So maybe stores do need to have monitors up on Sunday so they can watch the football games, and wine tastings to meet women. They need to cater specifically to both the younger and the older crowds.  And they need to understand how to start tiering their message, merchandise and experience for each group.”

Affinity for clothes shopping grew significantly among men from last year, according to the Cotton Incorporated Lifestyle Monitor™ Survey.  More than one-third of males (35%) say they “love or enjoy” clothes shopping, up from 28% in 2008.  The increase was driven by those ages 25-to-34, whose enjoyment jumped from 38% to 48%.

[quote]Tom Julian, a noted trend expert who operates the retail consultancy Tom Julian Group, says he saw just how plugged in younger men can be when he worked last year with askmen.com at multiple Chivas-sponsored events.

“We were targeting men 18-to-35 and the attendees were very in-the-know about designers, stores, trends and must-have items,” Julian notes.  “From Miami to Chicago to Dallas, I had conversations with men about shopping high-to-low, ideas on favorite accessories, vintage with modern retail. Today’s generation also is knowledgeable about getting great buys online with flash sale sites, as well as coveted items like art sneakers by Nike.”

Lucas says men ages 18-to-35 are motivated by more than simple replenishment needs.  In fact, while 52% of men overall buy new clothes to replace their current styles, the Monitor finds 54% of those 13-to-34 are buying “new and different.”

“They are looking to update their wardrobes, purchase something they saw and liked, make impulse purchases at sales and purchase for a special occasion,” Lucas says.  “While dressing for comfort is paramount across all age segments, younger segments are much more interested in clothes and fashion, striving to create a personal style or look and wearing clothes that stand out. As a result, they have a desire to find the right brand, look or retailer to help them achieve their self-expression.” 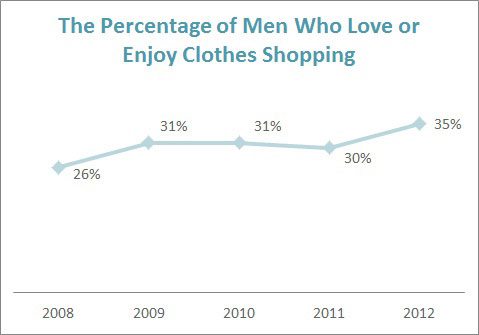 Monitor data bear this out; men ages 13-34 are more likely to say they stay on the cutting edge of fashion, compared to older men (41% versus 23%) who say they adopt new styles much more slowly.

Retailers are recognizing men are not leaving their clothes shopping to their wives or mothers any more.  The New York Times recently pointed out new men’s-only stores from J. Crew, Lanvin, Coach, Club Monaco and Ralph Lauren, among others.

Julian points to Crew’s “Liquor Store” concept as fueling an interest in tailored clothing, curated collections and limited edition products. And newer retailers like Union Made in San Francisco and Lost Boys in Washington, D.C., Julian says, “are the new generation of stores.”

“Men’s has outpaced women’s for two years now because they adapted to two things: the new leaner modern silhouette; and both young and old recognize style and image as something they want to accomplish,” says Cohen. “Before the recession, it was all about electronics and how tech savvy you were. But now they’re more comfortable with electronics and it’s about looking more managerial — and successful.”

Lucas says men’s should continue to do well, as the 25-to-34 year old segment is projected to grow 6% over the next five years. “As this segment grows, as they start working and have increased income, they will drive demand for men’s apparel.”