It’s hard to figure out who thinks summer flies by faster: kids or their parents. But for retailers and apparel brands, the all-important Back-To-School (BTS) season is anticipated nearly as much as Christmas. And in 2017, stores should keep in mind that the season is getting longer, time spent shopping is ever tighter, and the digital influence is greater. There are still some traditions in the BTS season though: shopping in-store and picking up new jeans.

"You might think online shopping would be higher, but much of Back-to-School is done with family. And kids say, 'I want Mom's wallet with me.’...So Back-to-School, particularly for apparel, is still an immature category, especially when compared to electronics and footwear."

Industry groups say BTS is the second biggest shopping season for retailers, after the winter holidays. Last year, the National Retail Federation projected BTS sales would reach $75.8 billion. This year, Back-to-School clothing shoppers plan to spend about $267 on new apparel, which up about 10-to-16 percent from responses in 2013 ($231) and 2014 ($243), but flat from 2015 ($265) and 2016 ($266), according to the Cotton Incorporated Lifestyle Monitor™ Survey. 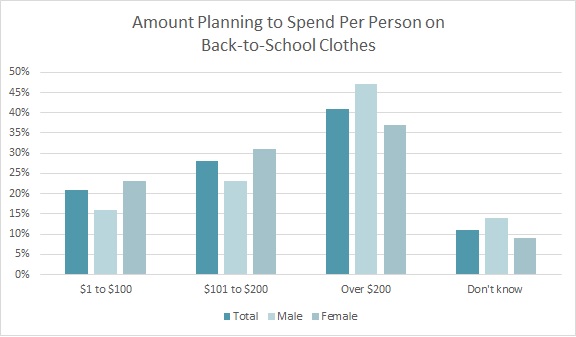 Retailers can count on parents bringing their kids in-store for the large majority of their clothes shopping, as the Monitor™ data shows 73 percent intend to shop in-store.

“You might think online shopping would be higher, but much of Back-to-School is done with family. And kids say, ‘I want Mom’s wallet with me’,” Cohen says. “So Back-to-School, particularly for apparel, is still an immature category, especially when compared to electronics and footwear.”

But that doesn’t mean parents and digitally savvy kids aren’t using the internet for their apparel needs. Tushar Patel, chief marketing officer for Kibo Commerce, an omnichannel commerce platform, says time is of the essence for today’s busy parents. And retailers have to be ready to act quickly.

“Back to school shopping for most students means having perfectly curated outfits and accessories. For busy parents, this means knowing which retailers are certain to carry the ‘must have’ items of the season and not wasting any time going to stores that have run out of the merchandise,” Patel says. “This is where retailers who offer buy online, pick up in store (BOPIS), and inventory visibility to customers will have the most success long before the first school bell rings.”

Patel says personalizing the shopping experience will make it even easier for parents and students alike to find the items they want and need.

“In our recent consumer trends report, 85 percent of shoppers indicated they are influenced by personalized promotions on a retailer’s home page, and 92 percent stated personalized shopping cart recommendations influence them to complete a purchase. If retailers get their fulfillment and personalization strategies perfected come [BTS], they are sure to be ahead of the pack in November when the world gears up for holiday shopping.”

Back-to-school clothing shoppers say more than two-thirds (68 percent) of their clothes will be bought before the first day of school, with the remainder being purchased a few weeks (18 percent) and a month or two (14 percent) after the first day of school, according to the Monitor™ data. However, more than half of all women (52 percent) buying clothes for their child or children say they will only buy a few items before their kids go back to school because, “I prefer to buy clothes throughout the year.”

“Half the country goes back to school when it’s still 80 degrees outside,” Cohen says. “There’s a midpoint running from the East Coast all the way to San Francisco that isn’t buying corduroy pants in August. For traditional BTS, there’s more than one period. August is first, followed by September, then October. BTS 2 is when we see a second wave of product hit the floors.”

“Back-to-School inventory should be optimized across various categories, including apparel, footwear, accessories, school supplies, and even home goods such as dorm essentials,” Glassburn says. “In addition, planners should consider local climates. Back-to-School apparel is usually associated with fall fabrics and styles; however, warmer climates should stock more versatile options that can be worn from summer into fall. For example, outerwear in warmer climates typically sells later in fall, so that in-store ‘real estate’ should be used for more relevant inventory.”

Retailers might find denim to be more relevant than ever this year. Vogue recently ran a headline stating, “No More Skinny Jeans: How Today’s Models Do Off-Duty Denim.” The piece went on to show styles that included high-rise distressed jeans, boyfriend styles, wide-leg overalls, and flares.

Already, jeans are expected to be purchased by 72 percent of Back-to-School shoppers, according to the Monitor™. This year’s increase in styles just might give them even more reasons to buy.

“There are a couple of things going for BTS denim,” Cohen says. “First, there’s no question that kids need new product every year. It’s not like that with adults. And from denim perspective, selections will be better. It won’t be as good from the skinny perspective because consumers have an ample supply of skinny — that’s going to be replenishment now. But you’ll get growth from outside of skinny. Also, the onslaught of the athletic influence is challenging, and the active market is still growing. But that market is slowing — so it won’t take same chunk from denim business.”