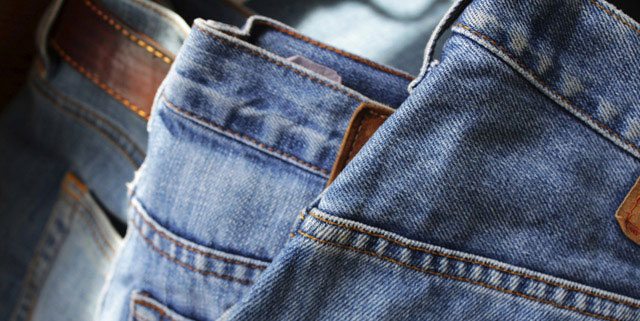 Doubling Down on Denim

Denim recently celebrated its 141st birthday – proving that some well-placed nips, tucks and makeovers can preserve one’s freshness. But over the last few years, one change has been less well received by denim wearers: the substitution of cotton for synthetic fibers. And some are saying it’s not enough to look the part; denim’s authenticity has to come from the inside, too.

"I would liken a jean not made out of cotton to be on par with a cookie not made with sugar."

“I would liken a jean not made out of cotton to be on par with a cookie not made with sugar,” says Earnest Sewn’s Vincent Flumiani, creative director. The USA-made label will be relaunching this fall. “It just doesn’t seem right.  I don’t think it’s a Rubik’s Cube as to why consumers want their jeans made out of cotton — they look better, they feel better, they wear better.”

The fiber swapping began after cotton prices surged in late 2010. Although prices stabilized a year later, the apparel industry continues to substitute manmade fibers for cotton.  Adding a bit of stretch for comfort evolved into some denim jeans being made with blends of less than 50% cotton.

On average, shoppers expect a pair of jeans to last about five years, according to the Cotton Incorporated Lifestyle Monitor™ Survey. However, research reveals consumer expectations aren’t being met. Seven out of 10 U.S. consumers say apparel prices have increased, but they’ve also noticed clothes typically made with cotton are now made with other fibers (56%), fabrics are thinner (55%), and don’t last as long (52%). Overall, 66% of U.S. consumers are dissatisfied with fiber substitution in their denim jeans.  And yet 60% of consumers would pay more to keep the cotton in their denim jeans.

Some brands, recognizing consumer preference, remain steadfast in keeping cotton in their collections. At Robin’s Jean, a super premium brand that also has five retail locations, the denim fabric for both men’s and women’s styles has always been traditional all-cotton denim, or cotton with a single-digit percentage of stretch.

Designer and founder Robin Chretien’s styles feature Swarovski studs (on both the men’s and women’s), biker-style knees, extensive pocket embroidery and embellishment — as well as straight-forward blue jeans. The designer hails from France, but moved to the U.S. in the mid-1990s.

“In Los Angeles, he quickly fell in love with the laid back atmosphere and beauty of the wide open road,” says Kim Dillard, spokesperson. “At that time, many denim brands were on the rise and being produced in L.A. In 2005, after a decade of honing his skills and expertise in the denim world, he created his own brand — Robin’s Jean.”

Chretien also makes his apparel in California, the state where denim originated.  “Robin’s Jean is made in the USA, which is something that Robin is very proud of,” Dillard notes.

Blue jeans were born in San Francisco during the gold mining era, when tailor Jacob Davis teamed with Levi Strauss to create riveted workwear made of denim. The pair received an official U.S. patent for their invention on May 20, 1873. Denim remained a conventional item until Hollywood gave it a cool factor in the 1950s. From there, it was only a matter of time before average Americans wanted to wear it. Of course, designer jeans took the category to new heights beginning in the late ’70s.

But throughout its various iterations, the fabric itself remained authentic to its heritage through its cotton construction – and remained a wardrobe favorite as a result. When compared to jeans with manmade fibers like polyester and rayon, the majority majority of women say 100% cotton or cotton/spandex jeans are the most breathable (82%), durable (80%), comfortable (80%), fashionable (75%) and versatile (73%), according to the Monitor.

Yet consumers say certain factors in their jeans purchases have become more important in the last year, including price (58% to 63%), quality (52% to 59%), durability (52% to 59%), multi-functional (42% to 47%), color (41% to 46%), softness (33% to 43%) and stretch (33% to 41%), according to the Monitor. A more scrutinizing jean shopper may be resulting from quality issues experienced in denim jeans over the past few years, or the growing consumer desire to make an investment in their clothing.

Flumiani says he always starts with fabric for his denim inspiration and direction. Fall will include new silhouettes like the Bryan Slouchy slim for men and the Astor Slouchy skinny for women.

“I was able to work with the best denim mills in the world and find beautiful selvedge and other denim fabrications that worked well with the Earnest Sewn aesthetic,” Flumiani says. “A large portion of the collection is primarily made of cotton.”

He points out that the stretch that was added to a portion of the collection was for the comfort aspect, “and not a question of the cost of cotton.”

Meanwhile, Chretien’s inspiration comes from music, film, motorcycles and Native American culture, which are in turn expressed in new washes, finishes and embellishments.

Say Dillard, “Our customers gravitate toward what is new and unique so they can express their individuality.”  And that’s in keeping with giving a modern twist on an authentic American icon.

How Best to Sell Everywhere Today’s Customers are Looking

How Many Denim Garments Do Men and Women Own