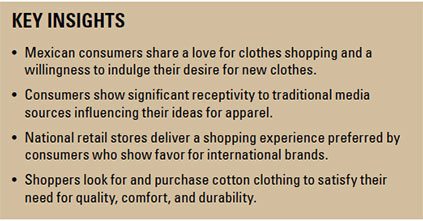 Economic and demographic factors have converged to propel Mexico’s financial growth and attract new commercial pursuits within the country. According to The Economist, Mexico may be one of the ten biggest economies in the next decade. Projections also indicate that Mexico may outpace Brazil to become the largest economy in Latin America within the next 15 years1. Mexico’s steady economic growth, youthful population, and striving middle class, estimated between 30% to 74% of the population, are defining economic traits that can help make this prediction a reality.

Recent inroads into the Mexican apparel market by foreign retailers such as American Eagle, Gap, and H&M reflect significant movements to garner consumer brand awareness and loyalty in this expanding apparel market. Cotton Incorporated’s Mexican Consumer Survey, a study of shoppers in Mexico City, exposes a confident consumer base that enjoys clothes shopping, favors quality apparel, and has distinct preferences, influences, and expectations. 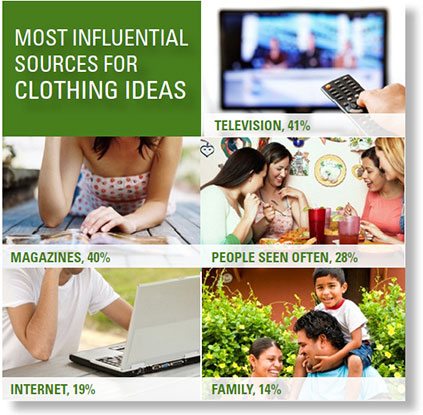 Three out of four Mexican consumers say they either love or enjoy shopping for clothing and also say that they shop for clothes once a month or more. Similar to their counterparts around the world, Mexican women are significantly more likely than men to love or enjoy clothes shopping, shop for clothes once per month or more often, and adopt style changes more quickly. As socio-economic level (SEL) increases, fondness for clothes shopping, frequency, and fashion‐forwardness rise. Conversely, these consumer shopping behaviors decrease as age increases.

While clothes shopping affinity and frequency are high among Mexican consumers, few are quick to adopt the latest trends. In fact, only 35% of consumers describe themselves as fashion-forward. Given that the majority of shoppers do not consider themselves to be fashion-forward, a retail strategy that includes a strong clothing basics offering may help optimize sales. At the same time, the success of fast-fashion retailers like Zara, in recent years, points to a market that may be yearning for more fashionable offerings.

In Mexico, consumers are most likely to draw inspiration for their clothing purchases from traditional media sources. Shoppers say that television and magazines are most influential on their thoughts about clothing. In contrast, consumers in Brazil, Colombia, and the U.S. are more likely to get clothing inspiration from people they know and styles they see in retail stores. In this consumer landscape, retailers and brands may enjoy a more favorable direct link to their target markets through conventional media. Significantly, new media exposure is growing strongly among Mexicans. Some projections indicate that over 50% of Mexico’s population will be internet users by 2020 and consumers’ positive reception of social media has led retailers to engage consumers via social network avenues such as Facebook2.

Regardless of demographics, quality (95%), comfort (95%), and fit (94%) top the list of primary factors in Mexican consumers’ decisions to purchase apparel. Shoppers indicate that price is a secondary consideration when shopping for clothing, which differs from Brazil, Colombia, and the U.S. where price remains a primary factor. Only 13% of Capitalinos in Mexico City say they always or usually buy clothes on sale, indicating that they do not seek sales as often as other global consumers. While Mexicans are not as price-conscious as shoppers in other countries, apparel price increases could still impact the quantity of clothing that consumers are willing to purchase. Mexican shoppers show a tendency to buy fewer items rather than purchase items they consider of lesser quality3.

A large segment of Mexican consumers (61%) favor domestic clothing stores (e.g., Liverpool, Aldo Conti, and Suburbia, etc.) and an equal number (61%) say that their favorite clothing brands (e.g., Zara, Sasha, and Polo, etc.) are international.  Although some domestic clothing brands such as Oggi Jeans and Aldo Conti rank high among consumers, international brands are preferred among women, youth, SEL AB, and consumers who mostly shop at specialty stores. Allegiance to national stores may be influenced by a sense of cultural connection and int

ernational brand preferences may be due to consumer interest in global fashion trends2.

Only two-thirds of Mexican consumers say they cross-shop at different retailers for clothing. This figure pales in comparison to the 94% of U.S. consumers who divide their shopping time among channels. Based on these findings, Mexican shoppers may be more store-loyal than U.S. consumers.

Although most Mexicans tend to buy clothing basics, they are purchasing apparel more out of desire than need. More than half of Mexican consumers said they purchased new T-shirts (54%), jeans (52%), and dress shirts (52%) for desire-based reasons like they wanted new ones and wanted new styles. In contrast, U.S. consumers spend more based on needing new clothes due to fit or durability issues. Cotton clothing staples such as socks, underwear, T-shirts, dress shirts, and jeans account for the majority of Mexican consumer’s wardrobes. On average, consumers say they spend about $886 (11,243 pesos) on clothing for themselves and others annually.

Preference for cotton apparel is high among all demographic segments. The majority of Mexican consumers (75%) prefer clothing made of cotton (algodón). Among the list of qualities that shoppers use to describe cotton, comfortable, good quality, and durable rank the highest. These qualities are the same factors that consumers say influence their decision to purchase. Given that 9 out of 10 consumers associate cotton with quality, it is not surprising that 68% say they would pay more to keep cotton in the clothing they buy. As the middle class continues to seek ways to enhance their lifestyle, they may seek apparel that best reflects their status. This growing consumer force will continue to seek out cotton apparel and the stores and brands that will help meet their needs for quality clothing.

Cotton Incorporated’s Mexico Consumer Survey was conducted through telephone interviews among 900 consumers living in Mexico City.  Respondents were male and female, ages 15-50, in socioeconomic groups AB, C+, and C, and shopped for most of their clothing at supermarket, department, or specialty stores.  Research was conducted in the fall of 2012 by Ipsos.