Businesses are all about getting the attention of the male audience come NFL playoff and Super Bowl time.  But in men’s wear, brands and retailers have been making a dedicated effort to reach these consumers for more than a year.  That trend only seems to be continuing.

“The men’s business is very strong and will get stronger,” says Alan Behar, president of Ike Behar.  “We now have our first brick-and-mortar store in Charleston, SC, and we are budgeted to open 10 over the next two years.”

"Men like to see the whole picture. We’ve been able to present this in our retail stores, as well as reach them through our site and social media."

The increase in spending directly correlates to men’s increased interest in fashion.  More than a third of men (34%) say they “love or enjoy” clothes shopping, up significantly from 27% in 2008, according to the Cotton Incorporated Lifestyle Monitor™ Survey. Further, men ages 25-to-34 (44%) are significantly more likely than their counterparts (31%) to feel this way.

Cult of Individuality’s Ron Poisson, founder and designer, says he is not quite sure if men are more knowledgeable about apparel now than in the past, or if all consumers just have an increased awareness of fashion trends.

“I think men have always have been sophisticated with their fashion,” Poisson says.  “I just don’t think there’s been enough people paying attention to what men have been wearing or what they want to wear.  I think some of the retailers now are paying more attention to it.”

More than a quarter of men (26%) shop for most of their apparel at chain stores, followed by mass merchants (26%), department (17%) and specialty (11%) stores, according to the Monitor survey.

Men earning $75,000 or more per year are significantly more likely than men making less to shop for most of their apparel at department (22% versus 13%) and specialty stores (15% versus 8%), the Monitor shows.  The percentage of men who shop for most of their clothes at mass merchants declines significantly as income rises: 42% among those earning less than $25,000 versus 13% among those earning $75,000 or more.

While just 7% of men buy most of their clothes online, according to Monitor data, it is an increasingly vital part of the men’s wear business, says David Coury, owner of the Namaste USA showroom, which represents AG Adriano Goldschmied, Levi’s Made & Crafted and Levi’s Vintage Clothing.

“Even if men don’t buy online as much as in store, we’re seeing how to dress by going online,” he explains.  “Websites are giving men style ideas.  And it’s easy to go online and read 10 different views on men’s apparel really quickly and see how to put it together.  We’re finding ways to enjoy the shopping experience more.  And retailers are making the experience better and easier for us.”

Men’s apparel sales increased 4.2% for the 12 months ending November 2012 versus the year ago period, according to recent reports from NPD Group’s Consumer Tracking Service.  This follows a 4% rise in 2011.  Comparatively, women’s apparel also saw a 4.2% increase last year, but only experienced a modest 2.3% growth in 2011.

Men are becoming bolder about their choices, mixing and matching to better express themselves.  Nearly three-fourths of men (74%) say they are more likely to buy separate pieces of an outfit at different stores rather than shop for an outfit at one store (up significantly from 62% in 2008), the Monitor reports.

Business has also been helped by the fact that men have adapted well to multi-platform retailing.

“We’re a lifestyle brand, and men like to see the whole picture,” Behar explains.  “So we’ve been able to present this in our retail stores, as well as reach them through our site and social media.  It’s really the only way to tell the full story of Ike Behar.”

Behar says the store walks a fine line between quickly serving the busy customer, while letting him feel at home if he wants to stay a while.  “We have seating, we have games on with local pro or college teams.  And we offer a full selection, but they feel like they’re going to a jewel box so they don’t get overwhelmed.”

Although 62% of men get their apparel ideas from what they already own and like, they are also influenced by store displays or window shopping (34%),  people seen regularly (34%), and the Internet (26%). 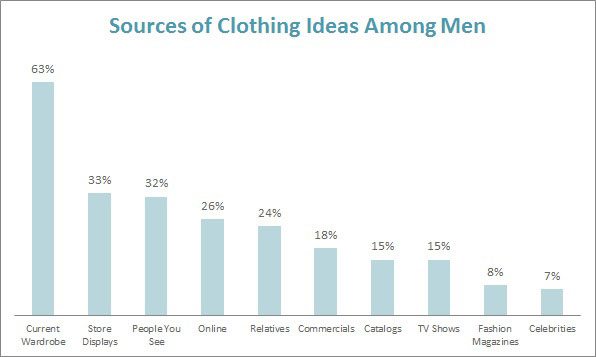 Poisson points out that “the best of all worlds is having your own site so you can really tell the story of your brand, while also occupying real estate with fixtures, signage and point of purchase items that create an environment that helps the consumer understand your message.”

Says Coury: “Men are finding ways to shop online, but from a brick-and-mortar proposition, it’s important that they continue to help and show men how to dress through the sales help, the merchandising and the presentation.”