A lot of people around the world will be celebrating Earth Day 2016 this week, all part of an effort to build the world’s largest environmental movement. While the Earth Day website encourages individuals to become more active in reducing waste while becoming more environmentally friendly, many in the apparel industry have already begun working to lessen their impact and become better stewards to the planet. And cotton, as a global industry, has been part of numerous programs promoting sustainability.

"Public companies can and are doing a lot...They see sustainability as a competitive business advantage and are making a good case for it."

Unlike flashy runway fashion shows, most of the hard work of sustainability goes on behind the scenes. Many apparel brands, retailers and suppliers have worked over the years to figure out how they can cut their water and dye usage, lower emissions during production, adopt energy efficiency in their plants, and more.

Last week, Pratt Institute hosted a live chat on The Guardian’s website that discussed tech innovations with the potential to revolutionize fashion.  The conversation went beyond the “super high tech fabrics” to discuss merging technology and fashion trends that address environmental concerns. Moderator Hanna Gould of The Guardian asked the panel if fashion was ignoring utility and durability in favor of short-term styles — i.e., fast fashion — saying they’re rarely seen in everyday wear.

“Denim, especially Levi’s denim, is an incredibly durable product that gets better with age,” Kobori stated. “We have 100-year-old jeans in our archives that look like styles we offer today.”

Of course, true denim is made from cotton. And compared to clothes made from manmade fibers, the majority of consumers (85 percent) say cotton apparel is the most sustainable, the most authentic (83 percent), and lasts the longest (70 percent), according to the Cotton Incorporated Lifestyle Monitor™ Survey. Almost 9 in 10 consumers (89 percent) say cotton is safe for the environment, nearly double the responses for manmade fibers such as polyester (54 percent) and rayon (46 percent).

Deb Johnson, executive director of the Brooklyn Fashion + Design Accelerator was also part of the Pratt/Guardian web event. She stated she visited North Carolina State University and noted the research being done on durability and “anti-bacterial fabrics that don’t need to be washed.”

For years, Cotton Incorporated has been developing and implementing new technologies and methods of cotton production and manufacturing in an effort to advance an environmentally responsible future. One of its more recent initiatives is its Cotton LEADS™ program, established in 2013. The program is committed to responsibly produced cotton. It was founded by an alliance of industry organizations in Australia and the U.S., and offers manufacturers, brands, and retailers a reliable cotton supply chain solution as well as confidence that their raw material is responsibly produced and identified. It also offers transparency and traceability in the supply chain.

When Rose Marcario, CEO of Patagonia spoke at the Energy for Tomorrow summit in Paris last December, she said part of the company’s journey is to be transparent in its manufacturing and supply chain steps for customers.

“I think in everything we do, we’re trying to elevate the conversation about the environmental impact we’re having as a business,” she told the audience. “And we try to be very up front about the fact that we have those impacts. A big focus of the company is how can we use resources in a way that are more reclaimed and recycled and when we use agricultural practices, to have them be regenerative and restorative, instead of just using up the resources. As businesses we have to recognize that.”

While Earth Day participation does prove consumers have environmental concerns, their interest doesn’t usually translate to their apparel purchases. Monitor™ data shows less than one-fifth of consumers (15 percent) say sustainability is very important in their apparel purchases and less than a third (32 percent) say they seek out sustainable apparel for themselves. However, the majority of consumers (57 percent) say they would blame the industry — manufacturer, brand or store — for clothes that were produced in a non-sustainable manner. 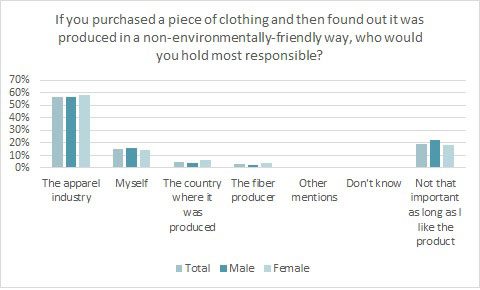 That’s why change is coming from within the industry itself. More than 350 manufacturers, retailers, mills and suppliers have joined Cotton LEADS™. The program aims to continue the improvements that have been made to the cotton production industry over the past few decades, including:

— 45 percent reduction in irrigation water use

Members of the apparel industry have also joined the Better Cotton Initiative and Sustainable Apparel Coalition in an effort to create more environmentally sound production methods.

Kobori told the Guardian panel that legislation and regulation is needed for “laggards” who are in a race to the bottom on price and standards. However, much is being done by those in the industry who want to make change.

“Public companies can and are doing a lot,” Kobori stated. “They see sustainability as a competitive business advantage and are making a good case for it.”

And that’s an attitude to gratify all Earth Day participants.