Why Your Intimates Should Be Cotton

They used to be called unmentionables. And then someone asked a presidential nominee if he wore boxers or briefs. Before we knew it, an entire lingerie fashion show was being televised to millions. Yes, the undergarment industry has come a long way, to the point where National Underwear Day is celebrated every August 5. But one thing that has remained a constant is the recommendation that men and women wear cotton underwear for their health.

"Wear breathable underwear. Cotton is your best choice. It doesn't hold onto heat or moisture. It will help keep you dry."

The type of fabric consumers choose for their undergarments can make a difference in whether they’re feeling cool and dry or hot and sweaty. Researchers have pointed out that synthetic underwear doesn’t breathe, thus creating a less-than-ideal warmth and moisture situation that can lead to issues for both men and women.

According to Berkeley Wellness, an online health resource from the University of California, Berkeley, an epidemiological survey in the European Journal of Obstetrics & Gynecology and Reproductive Biology (2003) found that “one of the factors associated with vaginal yeast infections is wearing underwear made from synthetic fabrics, which doesn’t ‘breathe’ and thus keep the genital area warm and moist, perfect conditions for the growth of yeast.”

To help women in this regard, WebMD advises, “Wear breathable underwear. Cotton is your best choice. It doesn’t hold onto heat or moisture. It will help keep you dry.”

Consumers seem to want to take heed of that counsel. Among female consumers, 83 percent prefer their underwear to be made of cotton, according to the Cotton Incorporated Lifestyle Monitor™ Survey. When describing why they prefer cotton underwear, 79 percent say it’s comfortable and 62 percent like that it’s breathable. Women also like that cotton underwear “keeps me dry” (38 percent), is healthier (36 percent), is cool (34 percent), and is natural (34 percent).

Researchers have found that men should be equally as concerned with the fiber used to manufacture their underwear. A study from Cairo University’s Department of Surgery and Experimental Research (1993) found that undergarments made with polyester “significantly reduced the sexual success of male rats.” In other words, the synthetics caused impotence.

In results published in the journal European Urology, it was determined that rodents that wore 100 percent polyester undergarments for an entire year “were 87 percent less likely to complete an attempted sexual encounter than they were in their pre-underwear days.” Rats that wore underwear made from a 50/50 cotton/polyester blend had dysfunction 71 percent of the time. Meanwhile, all-cotton garments had no measurable effect on the rats’ sexual success rates. Researchers determined polyester “generated an electrostatic potential in the genital area — an average of 443 volts per square centimeter for rats wearing 100 percent polyester and 239 volts per square centimeter for those wearing the blend.” Six months after removing the underwear, the rats’ sexual vigor returned to pre-test levels.

A later study published by Urological Research (1996) found similar results when it assessed desire and frequency of sexual activity among men based on the textile type of their underwear. Among men who wore 100 percent polyester and a poly/cotton blend, sexual desire and activity was “significantly reduced.” As with the rat study, those wearing all-cotton undergarments did not experience any change in activity.

Health experts have also found that synthetic underwear can affect men’s sperm count. In a study titled Effect of Different Types of Textile Fabrics on Spermatogenesis published by Urological Research (1993), it was determined polyester underwear led to degeneration of the testes and “significant decreases” in the sperm production among male dogs. After removal of the synthetic garments, “semen character improved.”

While the idea of wrestling animals into underwear might seem humorous, a more serious concern is at play: fertility rates are dropping in Western countries. In the U.S., for example, the fertility rate fell to a record low two years in a row. Playing a part in this decline is the fact that the sperm count of men in Western countries has dropped by more than half (59 percent) since 1973, according to a study in the Human Reproduction Update (2017). Scientists began noticing sperm counts were declining in 1992.

“Decreasing sperm count has been of great concern since it was first reported twenty-five years ago,” the study’s co-author Shanna H. Swan told Gizmodo. “This definitive study shows, for the first time, that this decline is strong and continuing. The fact that the decline is seen in Western countries strongly suggests that chemicals in commerce are playing a causal role in this trend.”

It may be coincidence, but men’s underwear fabric has changed considerably since the 1990s. A June 2018 research article titled A Review of Men’s Underwear Styles and Its Various Fabrics from the National Institute of Fashion Technology in India points out that cotton was “the only fabric used in making the underneath apparel for a very long time. However, the last couple of decades has seen a plethora of options in this category.” The paper goes on to discuss the synthetic fibers that have grown within the category, including nylon, rayon, and polyester.

Among males, 79 percent prefer their underwear to be made of cotton, according to the Monitor™ research. Men say they prefer the natural fiber because it keeps them comfortable (77 percent), it’s breathable (44 percent), it’s cool (29 percent), and it’s natural (25 percent). 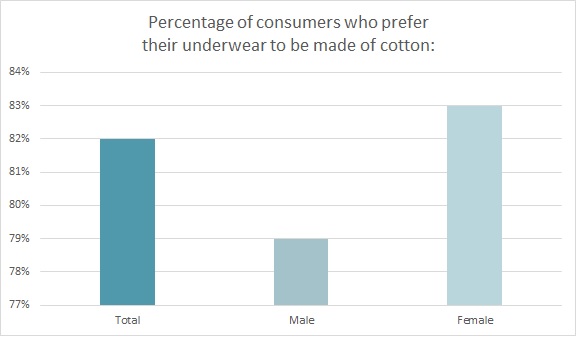 The majority of both men and women (60 percent) say they are bothered by brands and retailers that would substitute synthetic fibers for cotton in their underwear, up significantly from 54 percent in 2017, according to Monitor™ data. Women (64 percent) are significantly more concerned than men by fiber substitution. At the very least, health professionals say women’s underwear should have an all-cotton crotch to prevent infections.

Brands and retailers should note that the majority of men and women (70 percent) are willing to pay a slightly higher price to keep cotton from being substituted with synthetic fibers such as polyester in their underwear and intimates.

Considering experts suggest replacing underwear every six months to a year, the industry, and consumers, have plenty of opportunities beyond National Underwear Day to get intimates that match both their style and health preferences.

Where do men & women purchase most of their clothing?