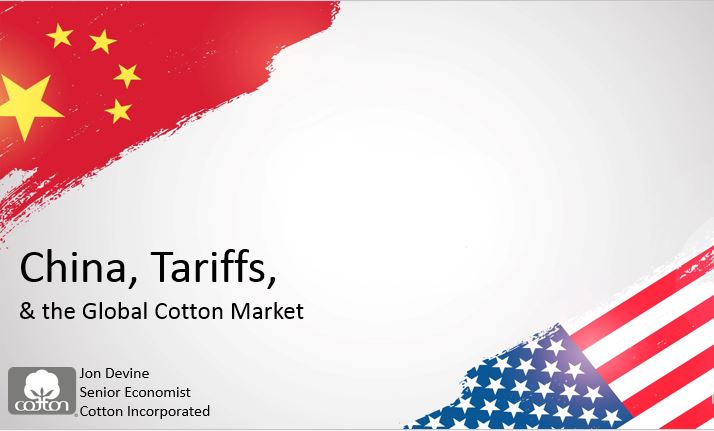 A reason why Chinese policies are so important is because China dominates discussion from the demand side.  Chinese mills represent nearly one third of global mill-use.  Even though China ranks as the world’s second-largest cotton grower (behind India), the volume of cotton spun by its mills consistently results in a wide production deficit (~15 million bales, or about a third of Chinese mill-use).  Over the past couple of decades, this supply gap has commonly been filled by imports, which has commonly made China the world’s largest importer.

However, this has not been the case over the past three cotton crop years.  Instead, during this time the Chinese government pushed the use of its reserve cotton supply to fill the gap.  Correspondingly, since 2015/16, Chinese imports have been the lowest in the modern era (i.e., since China joined the WTO in 2001).  Chinese imports between 2015/16-2017/18 were nearly 80% lower than the average between 2011/12 and 2012/13.

This tremendous decline in Chinese imports caused China to drop in the global rankings from number one to number three.   Bangladesh has been the world’s largest importer recently, closely followed by Vietnam.  This has been partly due to demand growth in these countries, but is primarily a result of the decline in shipments to China.  Imports from Bangladesh and Vietnam are between 5-8 million bales.  The size of China’s current production deficit is 15 million bales, implying that China’s need for imports, once reserves stabilize, is more than the sum of imports flowing to Bangladesh and Vietnam.

With China’s reserves already lower, Chinese imports can be expected to start increasing soon.  No one knows exactly how fast Chinese imports might rise, but over the next 2-3 years it could be expected that Chinese imports will return to levels approximating its production deficit.  With Chinese imports recently near five million bales, this implies a doubling or tripling of Chinese imports in the relatively near future.  The volatility in Chinese cotton prices early this summer, which has been attributed to a domestic supply scare, triggered the release of additional import quota by the Chinese government, and suggests that the increase in imports will begin in the 2018/19 crop year (August 2018-July 2019).

The expected increase in demand of 5-10 million bales over the next several years poses the question of where China will get all that cotton.  The natural answer is the U.S., the world’s largest cotton exporter.  The U.S. has represented about 40% of global exportable supply in recent years.  To provide context for how important the U.S. is as a source of supply internationally, it would take the sum of the next six largest exporters (India, Brazil, Australia, Burkina Faso, Mali, and Greece) to equal the volume shipped by the U.S. in 2017/18.

Complicating the easy answer that China will import more from the U.S. is the current tariff situation.  U.S. cotton was on the Chinese list of imports subjected to a 25 percentage point increase in tariffs starting on July 6th.

However, there are different categories of import quota potentially available, and not all categories are subject to the tariff increase.  One import category, known as “Processing Trade,” which requires the final product (i.e., apparel or home textiles) be exported, is not affected.  China also has free trade zones, which can import without quantitative limits and are also not subject to the tariffs.  Another category, known as “General Trade,” where the final goods can stay in China, has been affected by the tariff increase.  This range of import categories does leave some room for U.S. cotton to escape higher duties, but also leaves uncertainty regarding how much room there will actually be.  The Chinese government traditionally does not publicly disclose the proportion of import quota allocated across different categories.

When considering the effect on U.S. export demand, it is important to look at the strength of U.S. cotton shipments in recent years.  Despite China buying only about half of the cotton that it usually does from the U.S., total U.S. exports have ranked as the 2nd (2017/18) and 3rd (2016/17) highest on record.  This is due in large part to the growth in sales to markets outside of China, like Vietnam and Bangladesh.

Supporting these sales has been the U.S. reputation for quality.  Being machine picked, U.S. cotton has an earned reputation for being contamination free.  In today’s environmentally conscious world, the sustainability of U.S. cotton has become an increasingly important selling point.  For generations, U.S. universities have been at the forefront of developing new technologies to make agricultural production more efficient.  This has doubled U.S. cotton yields over the past five decades.

Further improvements are expected with sustainability a central objective.  Cotton Incorporated helps guide this research, funding around 400 projects each year, the majority with a sustainability focus.  It starts in the field, with efforts directed towards the development of increasingly precise field applications with the introduction of robotics, but extends all the way through the supply chain with projects directed to reduce the use of water, energy, and chemistry at each step in the fabrication process.

Is the Mall Really Dead?