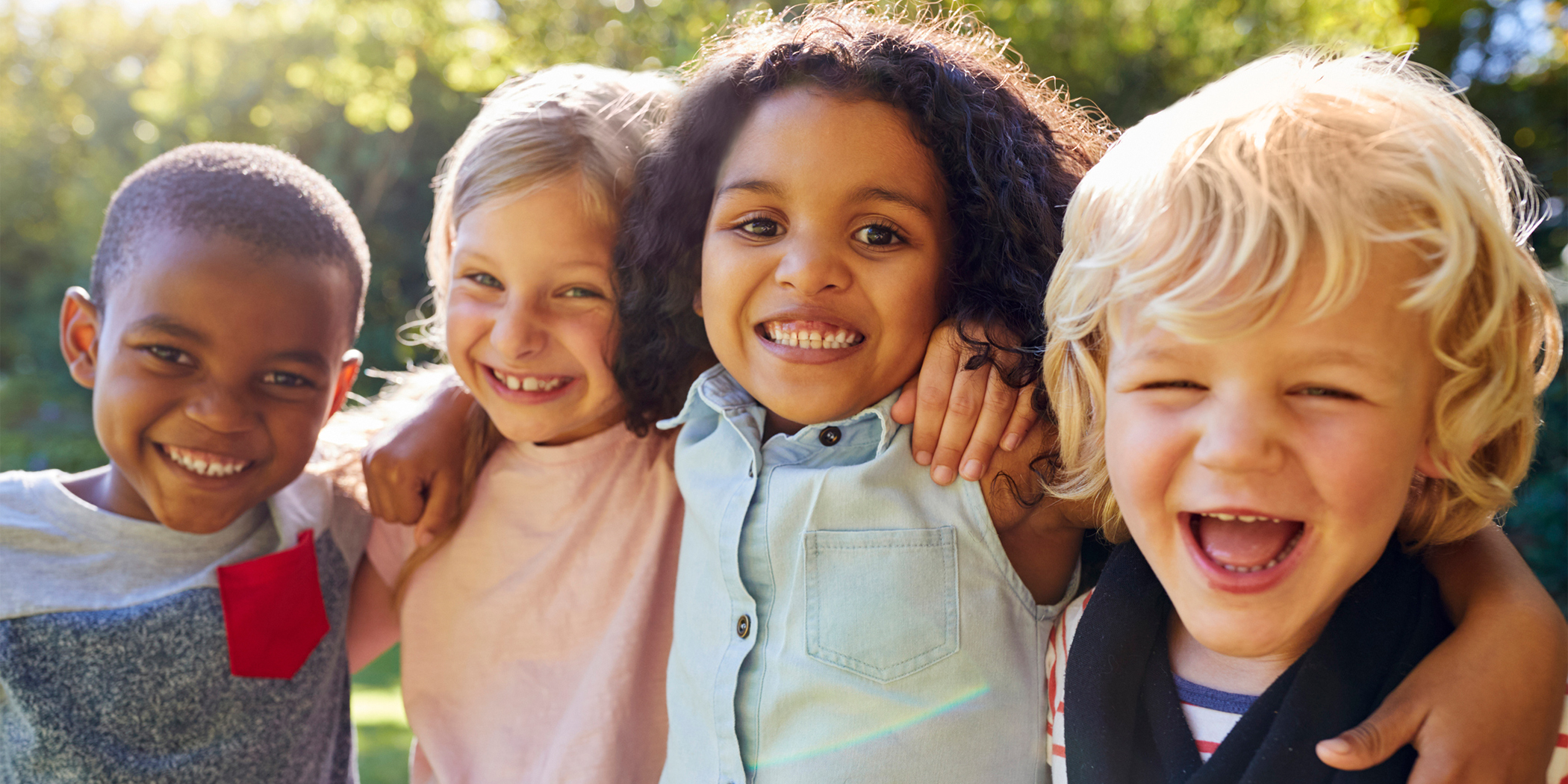 Perhaps unsurprisingly, North West, daughter to Kim Kardashian and Kanye West, recently trended on Twitter. It seems the 5-year-old donned a pair of her mom’s pink snakeskin boots that perfectly matched her pink snakeskin print dress. And then proceeded to throw a bit of a tantrum when she wasn’t allowed to wear them out of the house. No, celebrities are not just like us, but most parents are familiar with clothing battles. For brands and retailers, figuring out how to appeal to kids while keeping parents happy is no easy task. But it’s definitely worth the effort.

"Kids become more influential in shopping decisions as they age, particularly those in the pre-teen stage, and retailers or brands should take advantage of their interest when developing and designing clothing assortments. Consulting kids as part of pre-production would be beneficial, as would offering customizable clothing options that give kids some authority over their wardrobe choices."

The U.S. market for children’s wear was estimated to be $60 billion for 2018 and is projected to exceed $76.4 billion by 2024, according to Global Industry Analysts, Inc. (GIA), a leading off-the-shelf market research publisher. That increase would mean a CAGR of 3.9 percent from 2016 to 2024. Although the annual spend on children’s apparel can vary from below $25 to thousands of dollars, the GIA survey finds the average household spends about $108 on kids’ clothes. Girls’ wear represents the largest product segment, accounting for a 39.4 percent share in 2018.

While trends and the moods of young ones may swing wildly, one thing for sure is the influence kids are having on the children’s wear industry, according to the Mintel Group.

“Considering kids’ involvement, retailers not only need to appeal to parents’ preferences, but those of kids as well,” the firm notes in its “Children’s Clothing U.S. 2019” report. “Kids become more influential in shopping decisions as they age, particularly those in the pre-teen stage, and retailers or brands should take advantage of their interest when developing and designing clothing assortments. Consulting kids as part of pre-production would be beneficial, as would offering customizable clothing options that give kids some authority over their wardrobe choices.”

Nearly half of all parents (46 percent) say they make clothing purchase decisions together with their children during those all-important Back-to-School shopping trips, according to the Cotton Incorporated Lifestyle Monitor™ Survey. Another 14 percent say their child/children make the decision on their own. 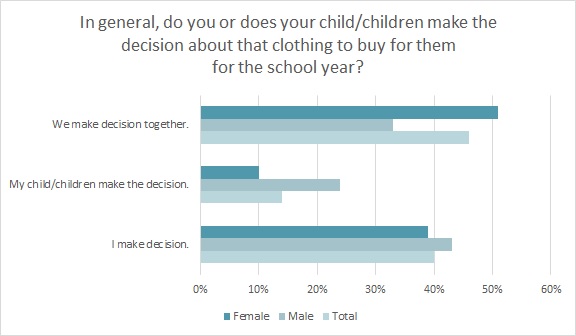 The preferred material for children’s clothing is cotton, due to its wash-friendly properties, according to GIA.

Additionally, parents say that compared to manmade fibers, cotton is the best for children’s wear (83 percent), with 84 percent saying it is the most comfortable and 65 percent saying it lasts the longest, according to Monitor™ research. More than 4 in 10 (44 percent) are bothered that brands and retailers may be substituting synthetic fibers for cotton. That extends to their concern with denim, as nearly half of all parents (49 percent) prefer to pay a slightly higher price to keep cotton from being substituted with synthetic fibers (such as polyester) in their kids’ jeans.

Retailers and brands should also know that certain performance features would coax parents to pay more for their kids’ clothes. When discussing Back-to-School apparel, 72 percent of parents say they would spend more on clothes that have shrink resistance, according to Monitor™ research. That’s followed by those who would pay more for clothes with stain resistance (70 percent), fade resistance (68 percent), odor resistance (64 percent), and durability enhancement (64 percent).

Due to the fact that kids are constantly growing and it’s tough to gauge their size without actually trying on clothes, parents and their children continue to shop at brick and mortar stores, according to a C&R Research “YouthBeat Shopping” report. The firm finds top retailers are mass merchandisers — Walmart and Target.

Mintel states that parents prefer mass merchants because 40 percent like to shop in stores where they can do additional shopping, either for themselves or others. “This results in more shopping trips occurring at channels like mass merchandisers (81 percent shopped in-store) rather than clothing retailers (62 percent shopped in-store). While some clothing retailers are still among the top shopped, parents are increasingly favoring retailers where they can get both stylish and affordable clothing, as well as other items on their shopping list. Retailers will need to consider other ways to stand out and cater to parents’ needs in order to remain relevant.”

Remaining relevant is more crucial than ever because, as the C&R YouthBeat report notes, kids like to shop on Amazon. The online giant was third favorite among the younger set (behind Walmart and Target), and the top choice among tweens and teens. As C&R analysts state, Amazon offers “everything from toys to clothes, or video games to phone cases; it has all a kid could want.”

C&R Research determined Nike is the top apparel brand for children. Justice is the second-most popular clothing brand for younger kids, and Under Armour ranks second among tweens. Kids and tweens say the top personality traits of their favorite brands are that it’s “cool,” “exciting,” “creative,” “comfortable,” — and “expensive.”

Many of today’s youngsters are getting those cool, pricier garments because, as the GIA report points out, American demographics are changing, creating an increasing number of older parents who are in their late 30s and 40s, have higher disposable incomes and a willingness to invest in their children’s wardrobes.

“These consumers are found to be very keen on buying the best designs for their children and draping them in expensive designer outfits from brands such as Dolce and Gabbana, Hugo Boss, and Marc Jacobs,” Global Industry Analyst reports. “The trend is prevalent among consumers in both upper- and middle-income brackets. In addition, parents no longer want their kids to dress up in the traditional train and truck patterns. They prefer to buy their kids the in-season fashion apparel and accessories.”

Despite a decline in birth rates, the U.S. and developed nations have seen an increase in the number of parents and grandparents “willing to splurge on their young ones with the best, as well as the safest products available in the market,” according to GIA’s report. This translates into an increased interest in clothes made of organic and natural fibers, as well as recycled materials.

The Mintel Group finds fathers can be full of potential as far as children’s apparel sales are concerned. In its report, the firm found more than 45 percent of dads feel it’s important for their children to look stylish. And few (26 percent) think price is more important than quality, “suggesting they view aesthetic appeal as more valuable and are willing to spend. Since dads shop the category less, they’re unfamiliar shoppers who are looking for guidance finding the best, and most stylish, options for their kids.”

The Elements That Are Keeping Activewear Hot

10 Facts to Know About COVID-19 & Consumer Concerns in China