The year 1873 was a busy one for San Francisco. That was the year the University of California opened its first medical school in the City by the Bay. San Francisco’s cable cars first began running. And the blue jean was born after tailor Jacob Davis and fabric supplier Levi Strauss received the patent for their copper-riveted denim cotton bottoms.[quote]

Now, the UCSF School of Medicine is one of the top-ranked in the country. The cable cars are an iconic form of transit in the city. And the blue jean, despite generations of trends and changes in taste, remains a powerhouse in the apparel industry, an item that’s worn as often by kids and fashion models as soccer dads and rock stars.

For its part, Levi Strauss & Co., has gone public and its first quarter net revenues grew 7 percent on a reported basis, and 11 percent on a constant-currency basis. Its Americas and Europe regions grew by 10 percent, while Asia increased by 14 percent. The company reported its Levi’s brand grew by 10 percent, building on momentum through new collabs like the Peanuts collection, as well as favorite fits like high rise for women and tapered fits for men.

“We delivered our sixth consecutive quarter of double-digit constant-currency revenue growth,” said Chip Bergh, president and chief executive officer of Levi Strauss & Co., in April’s earnings report. “Growth was broad-based across all three regions and all channels, demonstrating that our strategies are working and our investments are paying off.” 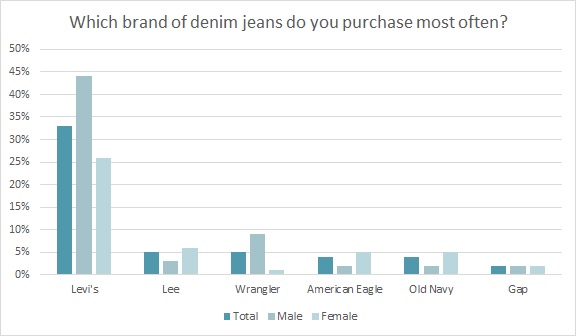 The global denim jeans market was valued at $66.02 billion USD in 2018 and is expected to grow to $85.4 billion USD by 2025, according to Zion Market Research. Already, North America and Europe hold major market shares in terms of revenue. And Zion says these regions should show significant growth in the denim jeans market in coming years as the industry makes a bigger effort to appeal to consumer needs.

Last fall, The NPD Group reported that the U.S. jeans market was valued at $16.4 billion, which was a 5 percent increase over the prior year. The women’s market saw a 9 percent increase in sales.

In the U.S., more than half of all consumers (55 percent) “love or enjoy” wearing denim, according to the Monitor, and CCI and Cotton Incorporated’s Global Lifestyle Monitor™ Survey. On average, women own six pairs of denim jeans, while men own five. And nearly two-thirds of consumers (61 percent) say they wear denim jeans or shorts at least three times a week.

A handful of years ago, observers were declaring denim to be dead, a casualty of the mighty — and mighty comfortable — athleisure trend. But it almost seems like denim makers said, “I see your yoga pants and raise you a high rise, wide-leg, cuffed, colored — oh, and stretch. Even in men’s.”

Which goes to prove that even if a giant is sleeping, it’s still a giant. Now, it’s been poked. The NPD Group says the denim industry just had to acknowledge consumers wanted comfort.

While a lot of today’s denim may bear a remarkable resemblance to those early blue jeans, the industry itself has worked on evolving, says Andrew Olah, CEO of Olah Inc., and co-founder of the New York and Nashville Denim Days festivals.

“The jeans we see today may look like those original Levi’s, but many brands and companies along the supply chain are working furiously to change the way we make jeans. Technology, better farming, conservation of resources, cleaner production, social responsibility, artificial intelligence and so much more are being put into the service of making jeans that are true to denim’s roots – but are better for the environment.

Jeanuine is another newer, independent brand in New York. The label allows consumers to personalize their denim via its Jean Maker app, which helps to create and modify every pair of jeans. Consumers can design their jeans online or visit the Consortium showroom in Manhattan. Consortium connects customizable brands both with consumers and larger retailers who want to incorporate experiential brands into their stores. Right now, its roster includes apparel, accessories, handbags and fragrance brands.

“Traditional retail needs this because the experience of customization brings people in,” says Nathalie Paiva, Consortium’s chief retail officer. “Jeanuine is one of the founding brands of Consortium, and it’s based out of Paris. They have an assortment of denim to choose from. To start the design process, we use a try-on set to identify your waist size because you’re going to be customizing everything else down to the style, the cut, the stitching — even monogramming, if you want. The jeans can be designed online or shoppers can make an appointment and come to the Consortium showroom. And people really want to touch, feel and try on apparel. That’s why we’re connecting all these retail partners so that we can have a local place for everybody to go and try on Jeanuine or any of our other 12 brands.”

Despite the bespoke design process, the Jeanuine jeans retail from $229.

“And consumers really feel connected to the product they create,” Paiva says.

Jeanuine’s custom approach is one that can help to foster loyalty. The Monitor™ research shows that 7 in 10 consumers say they would be more loyal to clothing brands that give them the ability to customize their clothing purchase.

“The point,” says Paiva, “is that you’re entering into something that’s cared for, thoughtful and is made for you. And they will get it right.”