While older consumers might be shaking their heads and lamenting the end of Sears and store closings from Macy’s, Gap, and others, younger digitally native consumers have found there are many, many places to shop online. And some of those ecommerce stores are finding even more success by opening brick and mortar locations.

“I think the way traditional retail is being used is transitioning quite quickly. But I do think that physical element is really important,” said Michelle Cordeiro Grant, founder and CEO of the intimate apparel company Lively. She spoke during a panel discussion at the recent Sourcing Journal Summit in New York. Besides its web store, Lively has a location in New York City’s Soho area. “Humans love experiences. They want to be together. I spent my time getting dropped off at the mall and walking around with my friends. What are the new generations going to do? That’s going to be around experiential fashion.”

"What are the new generations going to do? That's going to be around experiential fashion."

One of the most fascinating things about retail is how much it changes, despite how much we might forget how things were in the “good old days.”

In the 1970s, consumers had to live in big cities or drive a good distance to some of the first malls in their quest to shop major stores that carried all the labels they read about in magazines. By the ’80s, malls were busting out all over, and mom-and-pop stores felt left behind. Cut to the ’90s, and big box “category killers” like Toys “R” Us and Sports Authority started to dot highways across America. Then Walmart became the store to contend with, as it offered low prices in every category from food to clothes to hunting gear. Of course, online shopping and then Amazon changed the game yet again.

But one thing that hasn’t changed much is the overwhelming preference by consumers to buy clothes in-store. Even though consumers are very digitally savvy, they’re still more apt to buy apparel at a physical location (72 percent), according to the Cotton Incorporated Lifestyle Monitor™ Survey. They also like to go in-store if they have any questions before purchasing clothes (66 percent), as well as to follow-up with post-purchase questions (55 percent).

Of course, consumers are more comfortable than ever with digital devices, so many do their apparel research (61 percent) and browsing (50 percent) online, according to the Monitor™ data. 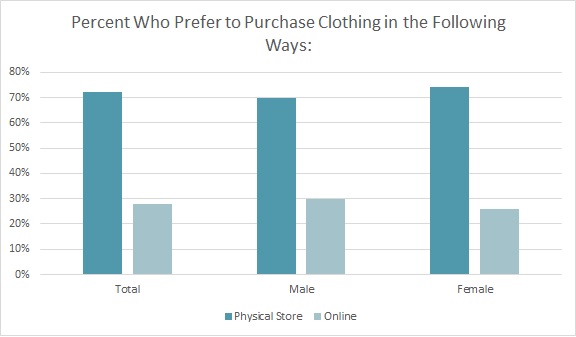 But the Monitor™ survey shows consumers like physical stores because it gives them the chance to try on clothes (69 percent), make sure the clothes fit (68 percent), see the item in person (64 percent), and feel the fabric (54 percent). Women are significantly more likely than men (72 percent versus 65 percent) to want to try on the clothes before buying them.

This preference has led to more ecommerce stores dipping their toe in the brick and mortar waters. Aman Advani, co-founder and CEO of Ministry of Supply, also spoke at the Sourcing Journal Summit. He said his company is 99 percent direct-to-consumer, with two-thirds of business done online, and one-third through the company’s stores.

“It’s early on and we’re still in the brand-building phase,” he said. “We want to have those kind of one-on-one interactions so people know exactly what we stand for.”

The in-store experience has now been elevated, though. Cordeiro Grant said Lively offered experiences to its community of shoppers 14 days after it launched.

“We started doing activations like succulent classes and workshops about entrepreneurship, etc.,” she said. “And what we see from those moments are marketing impressions, shoppers referring friends globally and acquiring really high-value customers. Those experiences really paid off. And so we started to open up pop-up shops and they became ROI-positive immediately; not based on marketing impressions but on the space itself.

At a recent panel discussion sponsored by HEC Paris, Jason Kim, co-founder of the men’s wear subscription Bombfell, said traditional retailers are feeling the pressure because they’re just not as nimble as start-ups.

“Stores like the Gap and Macy’s are huge. And it’s almost like trying to steer a giant ship,” Kim said, talking about how change can come about at these stores. “There needs to be enough people on deck to make that happen. It can’t be just this guy has a great idea and he brings it to his bosses, the way it happens at a small startup. It’s more like, you better get buy-in from 50 percent of the leadership to get something to happen in the right way. I get the sense that a lot of these big companies are now understanding they have to do something but are like, ‘Oh, do you have a task force to do this?’ They don’t have anything budgeted, but if they have a task force, they feel like they’re doing something.”

Jonathan Chanti, senior vice president of InfluencerDB, an influencer marketing and management platform, also spoke on the HEC panel. He explained that the recession led to a lot of empty storefronts, which led to commercial property owners looking for innovative ways to monetize properties.

“A lot of small startups couldn’t sign traditional leases,” he said. “So a lot of pop-ups started happening. Those pop-ups led to new consumers. Consumers led to purchasing online and now I see a lot of these brands around New York in permanent brick and mortar stores. I think it’s great. But when you think of Macy’s or Gap, they really have to think innovatively. Maybe they’re too big. Maybe they can scale that down and figure out what their brands really are and how people are buying these days.”

How Influential Are Promotions to Tier 2 Chinese Consumers

Best Fibers for the Environment Among Men