Even In Tight Economy, Consumers Can Be Impulsive

Jobs, taxes and the national debt are still on the lips of every politician and pundit.  Yes, it is the Age of Austerity.  But that has not stopped U.S. shoppers from making spur-of-the-moment buys.

“With impulse purchasing, there is often a sense of self-rewarding — ‘I deserve this, I can afford it and therefore I’m going to do it,'” explains Paco Underhill, author of What Women Want and Why We Buy, the Science of Shopping.  “If you can’t afford it, there’s a sense of rationalization to that process, and with some people it can reach the point where they say they’re actually saving.  But with everyone, the satisfaction comes from the thrill of the actual purchase.”

"Everyone is an impulse buyer. Studies show that women more than men and younger shoppers more than older shoppers buy on impulse -- but nobody is immune."

Even though 79% of consumers are “very or somewhat concerned” about a reduction in their annual household income, 30% of shoppers make impulse apparel purchases, according to the Cotton Incorporated Lifestyle Monitor™ Survey.

“I think everyone is an impulse buyer,” says Kit Yarrow, consumer psychologist,  Golden Gate University and author of Gen BuY.  “Studies show that women more than men and younger shoppers more than older shoppers buy on impulse — but nobody is immune.”

Yarrow says people are more susceptible to impulsively purchasing what they perceive to be an opportunity bargain.

“The word ‘free’ — as in, ‘Buy this, get that free’ — has always been a hit with shoppers and it’s even more so now,” she says.  “I don’t know if people are buying more overall impulse purchases these days.  But they are significantly more likely to enter a store that has a sale sign in the window or some other special offer like a bonus buy.”

Sale signs are definitely a customer draw: the Monitor finds 67% of women and 66% of men shop for clothes on sale.

Besides a big sale, consumers are also influenced by store and window displays (43%).

“A great tool for impulse shopping is good visual merchandizing,” Underhill says.  “There’s a reason why there’s a focal point in the store that has a jacket, blouse, pants and jewelry.  If someone walks in only looking for a jacket, that whole outfit looks pretty good.” 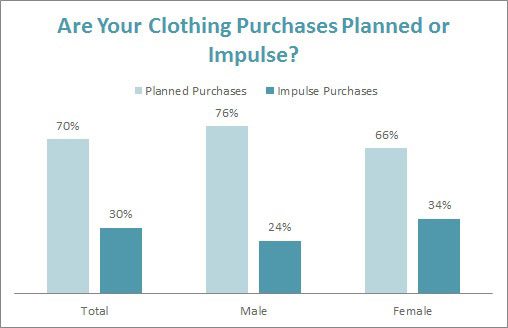 Among younger consumers age 13-to-24, males and females both shop in-store twice per month.  And while they may seem constantly connected to an electronic device, younger people have less access to credit cards, affecting their ability to make online purchases; most shop for clothes online once per month, similar to their older counterparts.

Aside from a big sale or promotion, product placement also resonates with consumers, Yarrow says. This includes putting accessories near the check out, or coordinating pieces near each other.

“People buy impulsively when they can visualize success, so creating a scene they can imagine themselves living in works,” she says. “Color is also significant. Red, orange and bright blue are ‘buy now’ colors.  But even just coordination through color helps stimulate purchasing. All of the senses attack the unconscious and can circumvent conscious ‘don’t buy’ thoughts.”

The Monitor shows consumers also get their apparel ideas from people they see regularly (34%), the Internet (30%), and catalogs (22%).  And there is a reason why stores and brands adore celebrity tie-ins and personal appearances — people flock to shopping centers not just to meet the star, but buy their product.  This is especially true among young people: among those 25-to-34, 34% say they are influenced by celebrities, as are 26% of those age 13-to-24.

A celebrity’s power to sway lessens as shoppers grow older.  Just 19% of those age 35-to-55 and 9% of those 56-to-70 find a celebrity’s apparel choices influential.

But situations and circumstances will still drive shoppers of all ages to drop money on something they did not intend to buy — be it a retail therapy moment or a response to a great sale.

“The breadth of places and situations where people are making their impulse purchases has changed,” Underhill states.  “We’re seeing many more impulse purchases being made by people traveling, because when you’re on vacation, you’re less price sensitive.  And they’re treating themselves across a broader spectrum of stores — from Saks to TJ Maxx.  But in the Age of Austerity, even though people are holding onto their money harder, impulse purchases are being made.”

The Kids Are Alright

Where Women Wear Their Exercise Apparel