The Great Recession schooled most consumers in the art of the deal. Smartphone apps and coupon websites fed consumer zeal to save in-store or snag free shipping for web orders.  But lately, although consumers are still spending carefully, deal finding as a sport has lost its shine.

Jeff Graham, a partner at creative agency Grenadier, a spin-off of ad agency Barkley U.S., says consumers want it all.

"Smart retailers are guarding themselves by offering exclusives, enhanced levels of service and a retail experience... that reinforces the consumer's notion of themselves."

“They want to feel like they got a great deal on exactly what they wanted and a purchase experience that makes them feel special, important and in-the-know,” Graham says.  “We need to be thinking about a great total purchase experience, and not simply about beating each other’s brains out on price.”

More than one-third of consumers (38%) are “very or somewhat optimistic” about the U.S. economy, up significantly from 31% in 2011, according to the Cotton Incorporated Lifestyle Monitor™ Survey.  Another 27% are neither pessimistic nor optimistic.  But 79% say they are “very or somewhat concerned” about a reduction in their annual household income.

Consumers’ desire to save money still has most looking for sale tags; 68% of shoppers say they buy the latest styles “on sale at the end of the season,” according to the Monitor, especially since 72% feel like the price of apparel, in general, has increased.

But signs of deal searching fatigue are showing.  Even during the holidays, when consumers planned to spend $568 for gifts, a 14% increase over 2012, less than half (45%) comparison shopped or looked for deals on days like Black Friday and Cyber Monday.

Normally, when shoppers are apparel shopping, the Monitor shows top purchasing factors are fit (77%), comfort (68%), and then price (59%).   For a good chunk of consumers, a trending style that makes them look good beats a magic price point.

Graham sees that, too.

“You can definitely see a degree of deal fatigue in culture,” Graham adds. “Look at the difficulties you see in the daily deal space among brands like Groupon and Living Social,” he remarks.  “That’s a very tough business at the moment, and those companies are rapidly adjusting their offerings to find a more sustainable model.  They’re moving toward a dependable, wide selection of searchable deals, they’re selling physical goods and even throwing in free shipping.  Sound familiar?  Amazon has pretty well nailed what a good all-around shopping experience looks like.  It’s their world, and the rest of us are just adjusting to it.  That’s the ‘new normal.'”

Flash sale venues like Gilt Groupe and Rue La La were once considered top rivals to Amazon and eBay.  But such sites, which BusinessInsider expects to reach $6 billion in sales by 2015, are changing as well.  Women’s Wear Daily reported recently that when luxury consumers began returning to their favorite stores, the flash sites had less inventory to offer.  It did not help that some of the stores also offered their own flash sale platforms.

“The Internet created the expectation of the lowest price,” Ginsberg says. “For a certain group, there is outright fatigue searching for the best price.”

On the other hand, take the case of JC Penney.  It had long offered coupons and weekly sales.  One could say it tried to get out ahead of deal fatigue with its “always 40% off” strategy.  But that backfired and distanced its core customer.  Now, it has added a 20% off “friends and family” sale program.

“JC Penney trained its consumer for 40 or 50 years,” Ginsberg says.  “Shoppers knew they’d get their Friday afternoon sale and it created a special relationship.  Finding a deal can be a big motivator for shopping. Other retailers don’t have to do that.  But to apply Apple’s consumer model to JC Penney ignores the motivations behind the consumer.  Know your shopper.”

For brands other than Apple, Ginsberg says shoppers simply have an expectation that a better price exists.  That is why showrooming — in-store comparison shopping via a personal device — grew with increased smartphone ownership.

However, showrooming actually decreased over the last holiday period.  The Monitor found 63% of smartphone shoppers expected to use devices to comparison shop, down significantly from 82% in 2011. 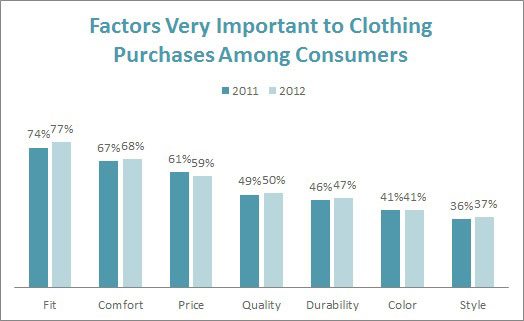 “Macy’s has done a pretty good job of counteracting showrooming with in-store apps,” Ginsberg says.  “Price isn’t everything — selection and service do count for something.  Smart retailers are guarding themselves by offering exclusives, enhanced levels of service and a retail experience, whether online or off, that reinforces the consumer’s notion of themselves.”

And for consumers who want easier access to a deal, Graham advises retailers consider “a co-branded version of a utility with a giant, installed user-base, one that your customers likely already use every day.  And they’ll probably appreciate the fact you didn’t clog up their phone with yet another so-so ‘proprietary’ app.”

The Fine Art of Generational Appeal