Retailers are constantly being urged to up their social media presence. But that doesn’t mean they should simply join another social network and then forget about it. In the rush to be part of modern retailing, some stores forgot the communal, interactive aspect of social media.

[quote]Michael Weiss, managing partner for C-4 Analytics, a Boston-based digital marketing agency, says most retailers – and not just apparel – are still struggling to understand social media. They need to discover how social media can deliver customer research and customer service, and fill gaps that a marketing program cannot.  While most consumers start their online apparel shopping through retailer or brand sites (55%), e-commerce sites (29%), and search engines (25%) according to the Cotton Incorporated Lifestyle Monitor™ Survey, almost 1 in 10 consumers start shopping through social media sites (7%).

In the low-margin world of fashion retail, apparel stores that manage to navigate the diverse social media landscape can benefit greatly, especially given that shoppers still say clothes (30%) are their top item of choice to shop for, followed by electronics, (23%), groceries (25%) shoes (10%) and cosmetics (6%), according to the Monitor survey. And the majority (55%) continue to “love or enjoy” clothes shopping. 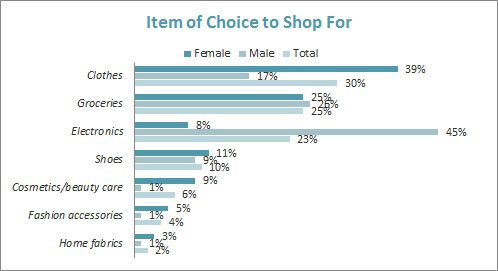 The problem for retailers is that social media isn’t as simple as setting and forgetting a Facebook page or Twitter account. It’s about geo-location apps that can alert shoppers to local deals, wallet apps that show mobile users where they can shop nearby while paying via smartphone, as well as reward apps that alert shoppers to deals when they walk near a store. Complicating matters is the fact that new apps continue to pop up regularly, making it tough for stores to figure out where to spend their social media dollars.

It’s expected that U.S. social media advertising revenue will jump nearly 200% to $15 billion in 2018, from $5.1 billion last year, according to a recent report from BIA/Kelsey, a media research and consulting firm. This year, the firm expects social ad revenue to increase 62.7%, to hit $8.3 billion.

Much of the social media budget revolves around ads that appear in, say, the Facebook newsfeed.  But shopping apps can be quite beneficial to both the retailer and the consumer. Again, the problem is picking the right player.

Some apps, like Instagram, are really just geo-social while others — like Shopkick or iBeacon — incorporate commerce. Geolocation apps, meanwhile, appeal to the tablet or smartphone user. The Monitor stats show 45% of shoppers browse on their phone, while 39% use their tablet, and less than one in five (18%) use a smart TV. However, the majority (84%) turns to their traditional desktop or laptop computers to browse apparel online.

Weiss says a big drawback to geolocation apps is the “spying” factor they inherently possess.

“Some of our established retail clients have been very resistant to geolocation because they see it as intrusive, and it’s hard to argue that point,” he says. “If you’re a national brand, people know who you are and where you are, and they don’t necessarily want another one of your ads showing up every time they walk by your store. They may want something very personal that’s interesting to them, such as an alert when a shirt goes on sale.”

Weiss points out that apps like Scoutmob are more of a service — and C-4 would recommend it to a new business or a regional retailer with just a few storefronts. “Platforms like this can get a local business some consideration and ‘even up’ things against the onslaught of advertising from larger retailers.”

On the other hand, he says, Shopkick is a loyalty program that gets shared across competing retailers. “You probably don’t want your customer redeeming loyalty points at the store down the road. It’s better to run your own program.”

The fact remains though, today’s consumers like various aspects of pre- and social shopping, whether it’s on a retailer’s site or social media. The majority of shoppers “always/usually/sometimes” compare prices (77%), browse styles (73%), look-up coupons (71%) and read customer reviews (58%) online before purchasing an apparel item in store, according to the Monitor. Fully 68% of shoppers say online product reviews are “very or somewhat influential” when shopping for apparel, up significantly from 61% in November 2010. And most (68%) read these reviews on retailer or brand websites, followed by e-commerce (30%) and community-based social media sites like Facebook or Twitter (15%) and media-based social sites like Instagram and Pinterest (13%).

Weiss says once a store understands who it wants to reach, it then must start listening to its customers.

“If people are asking for a specific service or information on Facebook or Twitter, find a way to provide it,” he says. “Social media has made it easier than ever for retailers to talk with their customers and learn what they want. Note that I said ‘talk with,’ which means real, two-way dialogue. If you’re just talking at them with promotions or canned questions like, ‘What’s your favorite weekend getaway?,’ you’re just going through the motions, and a lot of users will tune out. Actual conversation builds real engagement that becomes a powerful way to promote your business.”

The Science Behind Sleeping WellWinning in the U.S. Activewear Market