Scrambling to keep costs low in the face of historic cotton price highs several years ago, retailers and manufacturers began swapping out cotton for synthetics.  And while cotton prices have long since stabilized, those fiber substitutions remain – much to consumers’ ire.

[quote]”I’ve worn these tanks for the last couple years and this year they are not the same,” wrote one customer, whose remarks on a retailer’s comment page are part of a study for the Cotton Incorporated Customer Comments Project.  “Very thin and cheap feeling. They used to be nice and thick and made with more cotton. I bought one of each color, and a few white and black. They are all going back. (Retailer), PLEASE BRING BACK THE QUALITY FROM THE PREVIOUS YEARS! I used to love these tanks.”

This customer purchased her tank tops, made of cotton blend fabrics, at a luxury department store. Not only do nearly eight in ten consumers prefer their clothing to be made of cotton and cotton blends, but 60% would also pay a slightly higher price to keep it from being substituted with synthetics in their tees, as well as their underwear (61%) and jeans (60%), according to the Cotton Incorporated Lifestyle Monitor™ Survey.

Chuck Rudy, executive creative director at The Brand Union, a global brand consultancy, says labels may diminish their brand by moving to synthetics if consumers feel the new garment does not last or wear the same as in the past.

“People do notice change,” Rudy says.  “Sometimes not right away, but eventually we know when our favorite brand has done something differently. Normally, my shirt would have lasted two years. Now, I’ve washed it twice, and it’s falling apart. Clearly, something has changed. Once loyal consumers notice the change, they will seek a better quality product.”

And it turns out consumers have noticed. A majority (63%) say clothes are thinner than they used to be, and 59% say apparel does not last as long as it used to, the Monitor shows.  On average, consumers expect their outerwear and suits to last about six years, their denim five years, pants and tops four-to-five years and intimates about two years.

Additionally, 55% of shoppers have noticed a shift away from cotton towards other fibers, at the same time saying the quality of apparel has declined from last year (52%), according to the Monitor survey.

But consumers might not have immediately realized these fabric changes because an effort has been made to mimic natural fibers like cotton.

M. Fredric’s Fred Levine, co-owner of the regional California boutique chain, says today’s synthetics have a different hand feel than the unnatural fibers of the ’70s.

“Shoppers consider how the garment feels on their skin and how well it drapes over the body,” Levine says.  “Often times, a label reading 100% polyester or cotton/poly blend is a shock to a customer.”

AT Kearney’s Chris Callieri, principal in the firm’s retail and consumer practice, says even though consumers have a preference for natural fibers or even cotton blends, some retailers stayed with synthetics because of cost.

“But cotton prices have been stable at about 90 cents a pound,” he says.  “Now, there have been fabric innovations with wicking, etc., and some of that has to do with cotton/synthetic blends.  But if there is no distinguishing value proposition, retailers that are heavier on synthetics, especially in the purely fashion items, may potentially lose.”

That is because consumers may feel duped if the product does not wear as expected.  That was the experience for one denim buyer in the Customer Comments Project.

“…I tried them on immediately and they fit beautifully — just like the [brand] of years past…. I washed and dried them as directed, put them on feeling really good and within an hour they had stretched out to ridiculous proportions. I could take them off and put them back on without undoing the fly! They were HUGE and baggy and I felt like a rodeo clown by the end of the day…. It surprises me that [retailer] has turned such a blind eye to this problem. I won’t be buying any more until they return to 100% cotton.” 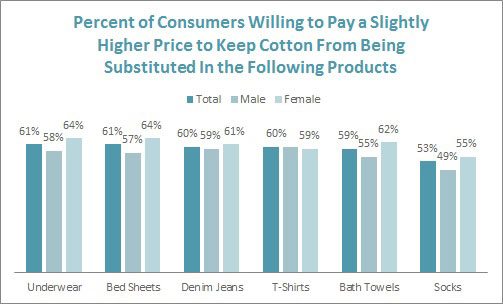 Her frustration is echoed among other consumers; more than 6 of 10 consumers (61%) are bothered that brands and retailers may be substituting synthetic fibers for cotton in their denim jeans, the Monitor shows, followed by underwear (60%), tees (59%), socks (53%) and dress shirts (50%).

“When people are spending at a certain level, they have expectations.  When something falls apart or shrinks after they have it cleaned or wash it, yes, they’re going to be angry.”

Rudy says higher-end retailers may need to be wary.

“Mass brands may receive a bit more forgiveness from their consumer base, given that their intent is to cater to as many people as possible,” he says.  “But higher-end stores may stand to lose more with a design or quality shift. Typically, their consumers are looking for better quality products.  When a consumer discovers otherwise, they might seek quality from another company.”