The funky black and white squares posted in store windows may look like optical illusions to some, but are gateways to customized shopping for those who recognize a QR code.

[quote]More retailers — especially the bigger chains — are using these 2D matrix barcodes in-store or in window displays to enrich the consumer shopping experience, whether customers have time to go in-store or not.  The QR — short for Quick Response — code can be packed with information, all for the taking by anyone with a smartphone or tablet.

As smartphone ownership grows, so does the imperative for reaching and interacting with consumers through their devices.  As of June, 56% of American adults are now smartphone owners, according to Pew Research Center’s Internet & American Life Project.  Currently, 44% of shoppers say they browse for apparel using their mobile/smartphone, according to the Cotton Incorporated Lifestyle Monitor™ Survey.

In-store displays and windows are used as a source of apparel ideas for 42% of shoppers, the Monitor shows.  So if a shopper spots eye-catching merchandise in a retailer’s window but is not able to go in-store at that time, a quick snap of a QR code allows for easy shopping on the train ride home or during lunch break.

QR codes are accessed via tablets and smartphones.  The user downloads a barcode scanner app and the device’s camera can then take a picture of any QR code image.  Once the code is downloaded, the user is taken to the store’s page, which can feature promotional videos, coupons, or new products, among other things.

“It is one additional technique retailers can use to entice people to go into their stores or online to get more information that can potentially turn into a sale,” Shen says. “Currently people in the 18-to-34 age group are more familiar with QR and tend to use it more. But other demographics will also use it as the technology gets more widely spread.” 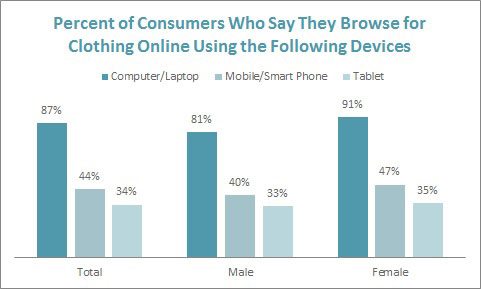 Walmart recently unveiled an update to its Scan & Go app, which allows shoppers to scan and bag groceries as they shop.  When they are finished shopping, they go to the self-checkout register and tap the “Transfer Scan & Go Basket” button on the checkout screen.  Scanning the QR code on the screen transfers items from their phone to the register, and then they pay as they normally would.

“Generally speaking,” Ask says, “QR codes are one of several options any brand has to add more information to print, and make print more dynamic as it can change the mobile web pages, and facilitate discovery, access and consumption of information.”

Among consumers who buy clothes online, 58% start shopping at retailer/brand websites, followed by retailer/brand emails (33%), e-commerce only sites (29%) and search engines (29%), according to the Monitor survey.  Nearly half (49%) say they shop at chain store websites, followed by mass merchant sites (45%) and Amazon.com (44%). Compared to responses in November 2010, significantly more consumers go to Amazon (31% to 44%) and significantly less shop at online specialty stores (43% to 35%).

As one of the many tactics retailers employ to retain customers, something like a QR code could help engage the would-be window shopper.

“Broadly speaking, mobile phones are a really, really big deal to retailers, brands and every B2C (business to consumer) company, enabling them to facilitate more targeted, personal engagement with customers or product owners,” Ask says.  “Consumers expect to find information on their phones to give them confidence to make the best decisions on products and services. QR codes play a role in this.”

When shopping for clothes online, more than eight out of 10 consumers (82%) look to the price in general to tell them about a clothing product, followed by information on sizing (70%), color (60%) and style (55%), the Monitor shows.  They also look for shipping promotions (45%), discount coupons (42%) and product/customer reviews (41%).

The Economist recently reported that traditional retail stores may be losing ground to online shopping, but traditional remains more profitable.  Last year, according to the article, online sales of shop-based American retailers grew by 29%; those of online-only merchants grew by just 21%. Clearly, the effort brick and mortar stores are putting into omni-channel retailing is having an effect.

And whether it leads to a sale or just imparts store information, something as small as a QR code is a relevant part of the retail story, Shen says.

“They can drive traffic into online stores all the time.”

August 2013 Executive Cotton UpdateHow Many Denim Garments Do Consumers Own