If you’re ever out and about in a big city, chances are you’ve seen people waiting in a long line and wondered what was going on. Often enough, it’s devoted fans waiting to shop at a pop-up store. In an age when virtually anything can be ordered online, there are those who argue that waiting in an actual line doesn’t make any sense. But for participants, it’s about meeting up with a like-minded community, socializing and being part of the experience.[quote]

“We were here Saturday at 6 a.m. with chairs, even though the line supposedly wasn’t forming until 8 a.m. and the doors didn’t open ’til 10,” said one line-goer for the Kendrick Lamar x Nike Cortez 3 pop-up that took place at Concepts NYC in SoHo over the blisteringly hot Memorial Day weekend. This participant had returned for the pop-up’s fourth and final day. “Other guys were camped out here Friday night. That was crazy. Then Saturday, it was so hot, people were dying of thirst, there was no shade….”

However, nobody left the line, which was shut down around 2 p.m. that Saturday. In fact, even with limited hours and a postage stamp-sized footprint, the space processed nearly 2,000 customers over the holiday weekend, according to the burly doorman who doubled as a line referee. Multiple pieces, including the Cortez shoes, sold out. And it didn’t hurt that Lamar himself showed up on Memorial Day with Jay Rock to hand out tickets to their Madison Square Garden concert scheduled for the next day.

“Exclusive designs or new releases of product are often shared at these pop-up stores, making any line worth the wait,” says Joy Fan, chief creative officer for Storefront, a pop-up rental business that’s been called the ‘AirBnb for retail.’ “Often the brand shares surprise appearances from influencers or designers, growing the lines around the corner.”

Whether it’s at the grocery store, the airport or the DMV, Americans annually spend 37 billion hours waiting in lines, according to Alex Stone, author of “Fooling Houdini: Magicians, Mentalists, Math Geeks and the Hidden Powers of the Mind.” However, those who queue up at fleeting pop-up stores wait willingly. David Gibson, a sociologist at the University of Notre Dame, told CityLab that for these line-goers, the experience is tied to their own identity. “They get recognition, status, and buzz among their friends by showing up at these places and being the first person” with the venue’s exclusive product which, in turn, gives them bragging rights.

More than four out of 10 consumers (45 percent) say they are likely to buy clothes from pop-up shops that feature complementary apparel brands, according to the Cotton Incorporated Lifestyle Monitor™ Survey. Males (48 percent) are a bit more interested in doing so than females (43 percent). And shoppers ages 13 to 34 (55 percent) are significantly more interested in shopping at a pop-up than their older counterparts (39 percent). Experts, however, say there are pop-ups for everyone. 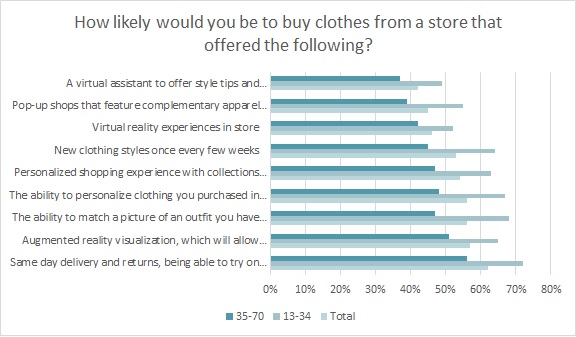 “Although Millennials make up the primary consumer population, they aren’t the only generation that is intrigued by the pop-up phenomenon,” says Tracey Hatley, Senior Vice President, Director of Specialty Leasing Services at JLL Retail. “The consumer base can range from young to old depending on the type of retail being offered.”

“Many Millennials have grown up with the ‘here today and gone tomorrow’ technology or concept, from Snapchat to music festivals,” she says. “So they tend to follow this trend more closely. But there are pop-up stores for every genre, type of product and service. And we’ve only seen the popularity grow for everyone.”

Three years ago, PopUp Republic, a Chicago-based marketing firm, estimated pop-up businesses were generating $45 to $50 billion in annual revenues. Now, Storefront estimates the temporary retail industry is expected to generate $80 billion per year. The company maintains that it’s faster and more cost-efficient for a brand to set up a pop-up than a permanent location.

Pop-ups that launch a new product resonate especially with younger consumers, particularly the guys. Millennial males (57 percent) and Millennial females (42 percent) are “very or somewhat likely” to feel more connected or loyal to clothing brands that offer exclusive product launch parties, according to the Monitor™ research.

When an online apparel brand could easily just stay online, pop-ups might seem like a pricey gamble. But Fan says they’re actually the opposite.

“Pop-up stores are always a great investment as it allows brands to generate leads and build their customer base, learn about their customers in person and leave a lasting memory on their customers, as well,” she says.

Even though a pop-up doesn’t represent a long-term lease, both Fan and Hatley say they can add variety, excitement, and consumer traffic to both shopping centers and neighborhoods. The temp spaces also allow brands to test their product in individual markets.