They’re baaa-aaack. And they’re as scary as ever. It’s that time of year when all the calories that were happily consumed over the holidays have come back to haunt us by way of snug clothes and uncooperative zippers. Luckily, there’s no shortage of activewear labels competing to be the brand we’re gonna call when we want a fatbuster. And to stand out in this crowded field, today’s active apparel companies are trying to connect with consumers in a variety of unconventional ways.[quote]

Major athletic brands like adidas, Lululemon, Nike, and Under Armour are becoming more immersive in their strategies to connect with consumers. That’s partly because the competition is fierce: According to the NPD Group, U.S. activewear sales grew 16 percent in 2015, while non-active apparel sales declined 2%. During this past holiday season, in stores like Urban Outfitters, nearly every junior’s mannequin saw activewear paired with everything from denim to sequin tops.

And finding activewear pretty much everywhere is something consumers like. In fact, 82 percent of U.S. shoppers say they love that they can go into any store and find active apparel, according to the Cotton Incorporated 2016 Activewear Study. But athleisure is making life harder for the activewear heavyweights. Traditional activewear also took a hit when the Sports Authority permanently folded. While Nike remains the top U.S. brand, its North American sales are slowing. Additionally, Under Armour warned investors last fall that its growth would slow over the next two years.

So the activewear companies are literally taking an active approach to not just draw people in, but also conceivably make a lasting connection — one that goes beyond the athleisure trend.

Of course, Lululemon has a long history of doing this — offering yoga classes in-store or promoting local yoga instructors from day one. But it has also opened Hub Seventeen in Manhattan, a space that brings together art, music, speakers, and workout enthusiasts.

Meanwhile, Nike has opened a new experiential store in Manhattan’s SoHo neighborhood. Its features include a half court for trying new basketball shoes, and treadmills that capture data about a runner’s stride and then make product suggestions. Its more-established Nike Community stores have grown throughout the U.S. These locations are more about engaging the local community. Each store hires at least 80 percent of its associates from within a 5-mile radius of the location. Stores also feature art with local flavor, often by local artists. And each associate agrees to volunteering with local groups like the Boys & Girls Club.

Not to be outdone, adidas opened its Republic of Sports store — a state of the art sports complex — in Shanghai. And it, too, opened and a new experiential flagship in midtown Manhattan, replete with a stadium-like tunnel entry and stands for viewing games on big screens. 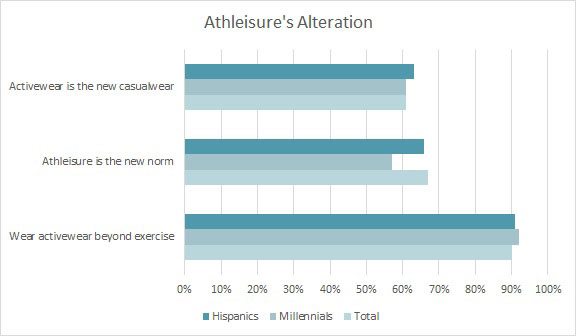 James Dion, founder and president of Chicago-based Dionco Inc., a retail consulting firm, says the investment these brands are making with their experiential retail stores will likely pay off.

“Locations are extremely important because they’re the touch point in the real world,” he says. “As good as digital is — and these days, it’s laser focused — the bond really get cemented in the physical world.”

Brand loyalty is a tricky business, and it’s a tough nut to crack in activewear. See, almost 7 in 10 consumers (69 percent) say they don’t feel an emotional connection to any clothing brand and nearly 1 in 2 (47 percent) say they are less loyal to clothing brands than they were a few years ago, according to the Cotton Incorporated Lifestyle Monitor™ Survey. However, 85 percent of consumers say they have a favorite activewear brand, which is significantly higher than other categories like jeans (77 percent), tees (35 percent), or dresses (17 percent). The top three brands? Nike, Under Armour, and adidas.

The Monitor™ research also shows that close to half of all consumers (48 percent) say they are more loyal to brands that seem to share their personal interests such as giving back to the community, health and fitness, cooking, art, music, etc. So it makes sense that these companies are going the extra mile.

“The old cliché is, ‘If you want loyalty, buy a dog,'” Dion quips. “Unless you have a true foundational reason for that loyalty. So a brand like Lululemon gives a lot of reasons for the loyalty, with knowledgeable staff and a community that values what you’re doing and taking product and weaving it into your everyday lifestyle. So, if you can tie up a customer’s entertainment and attention span — being as short as it is today; if you can get them involved in real life community — not just Facebook and that, but real physical experiences; if there’s going to be any loyalty, it will come from that. Not a logo.”

RetailNext’s Lauren Bitar, director of retail consulting, says there are several reasons activewear brands are taking creative and innovative approaches to connect with their customers. She points out activewear’s market saturation, as well as sports equipment companies like cycling and running entering the activewear arena. Further, she says, the athleisure movement is chipping away at market share as the more secular athletes opt for a Tory Burch tennis skirt or Ralph Lauren’s Polotech shirt rather than products from a traditional active brand.

Bitar says some of the strategies can also provide the highly valuable data retailers crave.

“As brands deal with balancing CRM (customer relationship management) and consumer privacy, products like wearable technology and concepts like running communities and clubs are other ways to get to know customers on an individual level and understand their propensity to adopt new products, go to certain locations, like from stores to ski resorts, etc.,” she says. “Under Armour likely purchased MapMyFitness among its other investments to be able to monitor customer fitness activity and suggest purchases. For example, if they notice someone has been running somewhere cold the last couple of weeks, they could suggest a new thermal shirt they’ve developed.”

Between a third and half of all consumers say they’re willing to choose an active brand that offers more customers engagement, such as an education on performance properties (54 percent), how to participate in new sports/activities (42 percent), sponsorships for active events or store group exercise (39 percent), and connecting through events or social media (32 percent), over a brand not doing these things, according to Monitor™ data. Millennials were even more inclined to choose brands that engage with them beyond the point of sale and become a partner in their active pursuits.

To that end, new flagship stores like those from Under Armour and The North Face give customers the chance to try out new equipment on-site under the guidance of trained store associates — whose expert advice may make it easier for shoppers to justify a new purchase.

“There might always be smaller, niche brands and communities,” she says, “but only a handful will have the capital and the reach to make themselves both heard and profitable at the same time.”