In New York, Diane Von Furstenberg and The Daily recently celebrated the designer’s summer fashion collection at DVF’s Meatpacking location, where a fashion astrologer and champagne set the party mood. Elsewhere, Bottega Veneta opened a seasonal pop-up (in Brooklyn) with offerings that include handbags, shoes, accessories, and key ready to wear pieces from recent Salon runway shows. And visitors to Triple Five’s American Dream shopping and entertainment center in East Rutherford, NJ, are met with signs announcing masks are not required for vaccinated guests. Talk about a dream come true.

As restrictions are lifted and more venues open, retailers are anticipating the return of the in-store customer — and assessing the incentives and experiences that will connect the most.

“The lift in health official restrictions and the increase in vaccinations will make a positive impact on physical retail,” says Shelley Kohan, founder and CEO of Shelmark Consulting Inc., New York. “Consumers are ready and wanting to get back to the stores. Keep in mind, unlike online shopping, which sometimes can be flat, brick-and-mortar retailers, offer immediate gratification and social interaction. Returning back to work and school for college kids later this year will all be positive factors in getting shoppers out to the stores.”

A report from Zenreach finds foot traffic and in-store visits to retail, restaurant, and entertainment venues has already increased 44 percent since the start of 2021, a 6 percent increase from last month. Some cities saw even bigger growth since the start of the year: Boston – 77 percent, New York – 83 percent, Chicago – 121 percent, and San Diego – 173 percent.

“[This] bodes well for our economy,” says Megan Wintersteen, vice president of marketing for Zenreach. “With indoor mask mandates starting to lift, Zenreach expects these numbers will continue to increase. It would not surprise me if nationwide foot traffic reaches a more than 55 percent lift (since Jan. 1) within the next three months.”

Consumers have said that when it’s safe, they’re most looking forward to seeing family or friends (44 percent), going on vacation (42 percent), going to their favorite restaurant or bar (31 percent) and attending concerts or large events (30 percent), according to Cotton Incorporated’s 2021 Coronavirus Response Consumer Survey, Wave 5, Feb 27-30. Most (69 percent) are even looking forward to dressing up again, although 79 percent say wearing comfortable apparel helps them feel better.

“All of these statistics are great indicators for the apparel segment,” Kohan says. “Consumers want to get out and socialize. That includes going out to eat and drink, as well as going out to shop.”

“Generation Z is bringing us home, as 77 percent believe the pandemic will be over by the end of 2021,” Kitchings said on the recent Robin Report podcast, “We’re Dressing Up: Post-COVID Optimism Research from Cotton Inc.” “This compares to just 62 percent of those 25 and over. This is really good news.”

There’s another somewhat surprising reason Gen Z shoppers represent a strong opportunity for stores: They’re eager to cut ties with Amazon. After all this time shopping online, 40 percent of U.S. shoppers say they would like to reduce the amount they spend on Amazon, according to a survey from Sitecore, a digital experience management software firm. Gen Z is most eager to break the Amazon shopping habit (53 percent), followed by Millennials (49 percent), Gen X (36 percent), and Baby Boomers (25 percent).

As it turns out, consumers have begun to feel guilty (30 percent) after they’ve shopped on Amazon, according to the Sitecore survey. They cite the receipt of low-quality goods (21 percent), better choices from other retailers (21 percent), and a desire to support other stores and brands (12 percent) as reasons they would like to reduce doing business with the online behemoth.

Kitchings also pointed out that, regardless of how consumers have been buying their clothes — whether it’s mostly online or in-store – nearly 8 out of 10 said they were looking forward to going back into a physical store to make their fashion purchase. 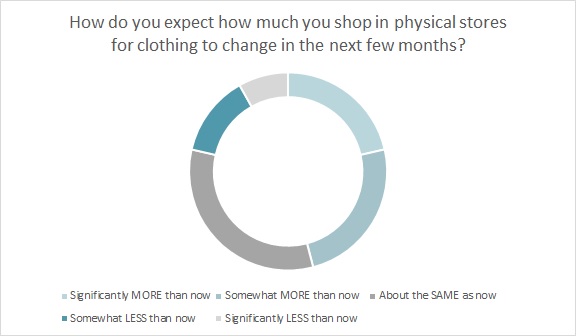 More than three-fourths of all shoppers (78 percent) say they expect to spend the same (32 percent) or increased (46 percent) amounts of time shopping for apparel in a brick-and-mortar retail location in the next few months, according to Cotton Incorporated’s Coronavirus Response Survey (Wave 6).

Kohan says digital shopping, be it Amazon or any other web store, will continue to grow over the next few years. But rather than simply accepting this migration, she says brick-and-mortar stores need become as engaging as social media.

“When looking at TikTok and live streaming of shopping online, the question becomes, ‘How can retailers replicate this type of experience within the four walls,'” Kohan says. “The most significant advantages for physical retail are the staff that represents the brand, and having inventory in stock when the customer comes into the store, both of which are table stakes in the new normal. Product is still king so assortment will be important for the target market. And, while retailers can try many gimmicks to engage customers in the store, keeping it simple is the best plan and making sure all of the basics are smooth.”

Where Women Wear Their Exercise Apparel