Holiday 2013 proved consumers were all about the bargain, shopping heavily over Thanksgiving’s “Black Weekend,” and then holding out until the end for super discounts.  Even with a steadily improving economy, though, shoppers were reluctant to break their budgets. So how can stores woo customers without giving into discounts?

[quote]Unique merchandise, entertainment or interesting in-store experiences and better dining options are among the suggestions from industry experts.

By now, retailers are highly proficient at running a tight ship.  But Retail Metrics’ Ken Perkins, founder of the Swampscott, MA-based research firm, says last holiday’s promotions were more intense than ever.

“Retail margins were under immense pressure as promotions ran early in the season — some starting in October and others offering layaway programs even as school was starting in September — and then they ran deeper than anticipated,” he explains.  “Retail Metrics tallied 28 negative earnings pre-announcements coming out of the holidays versus just two positive pre-announcements.  Earnings estimates have been slashed, with the 120 U.S. retailers in our Retail Metrics Earnings Index now expected to see year-over-year earnings growth fall by 3.8%.  This is down sharply from expectations of 5% growth on Nov. 1 and 2.5% growth at the start of December.”

Part of this is due to shoppers’ savviness; more than four out of 10 gift givers planned to stretch their holiday dollars by looking for deals on days like Black Friday (49%), shopping around to find the best bargain (44%), doing more comparison shopping (43%) and researching online before buying in-store (42%), according to the Cotton Incorporated Lifestyle Monitor™ Survey.

Steven Kirn, executive director of the David F. Miller Center for Retailing Education and Research at the University of Florida’s Warrington College of Business Administration, says all of this online pre-shopping had a major effect on stores.

Fortunately, total holiday retail sales for November and December increased 3.8% to $601.8 billion, according to the National Retail Federation.  But Kirn says online researching has led to everyone “shopping more like guys.”

“I know the pair of slacks I want, I get it and I’m out of there,” Kirn says.  “The downside is the traditional kind of treasure hunt — where people are looking at stuff and making impulse buys — is harder for retailers to capitalize on when they only have half the shoppers in stores.”

Indeed, more than seven out of 10 consumers (74%) browse the Internet for clothes, up significantly from 71% last year, according to the Monitor.

Yet the U.S. economy is picking up — the consumer price index rose +0.3% in December, manufacturing increased in January and jobless claims dropped to their lowest level since November — which should help give shoppers the confidence to spend.

Even though people may be more inclined to shop, sales and promotional discounts are here to stay, especially during the vital holiday period.  According to Cotton Incorporated’s Retail Monitor™ Survey, nearly half (46%) of apparel was offered on sale in the fourth quarter of 2013, higher than any other quarter in 2013.

“The general economic pie has been growing very slowly coming out of the Great Recession with upper income consumers seeing outsize gains but the vast majority of lower and middle income consumers not experiencing much income growth,” says Perkins.  “As a result, it has become more of a zero-sum game where retailers are aggressively competing for a limited pool of dollars and a rising tide is no longer lifting all boats.” 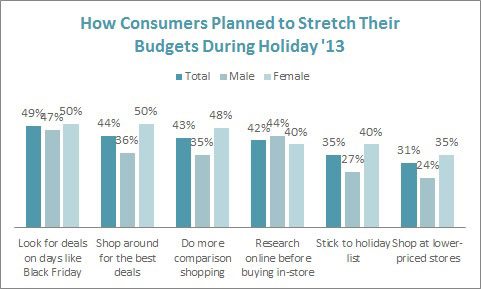 But both Kirn and Perkins say retailers have a few options to increase foot traffic and combat low margins.

“Private labels and designer exclusives clearly are one way to go,” Kirn advises.  “One advantage is, a store can say, ‘If you want this, you have to see me.’ Secondly, it discourages direct price comparisons.  If I’m Macy’s and I have Club Room sweaters, you can’t go to Lord & Taylor and do a direct comparison.  It also gives stores control over design and the supply chain.  So if you can build a good brand people can rely on, it becomes a competitive advantage.”

Perkins says retailers need to make their store more than just another trip on their checklist.

“This can be done by providing more inviting associates, music, free Wi-Fi, coffee bars, restaurants, more interactive displays that help with apparel sizes and suggestions, various forms of entertainment, etc.,” he says.  “I think all retailers need to figure out how they can best differentiate their product offerings so they are not just another commodity offering that consumers can easily find elsewhere.  These are daunting challenges but if they can find the right product mix with enough fashion or differentiation they can better maintain higher margins.”