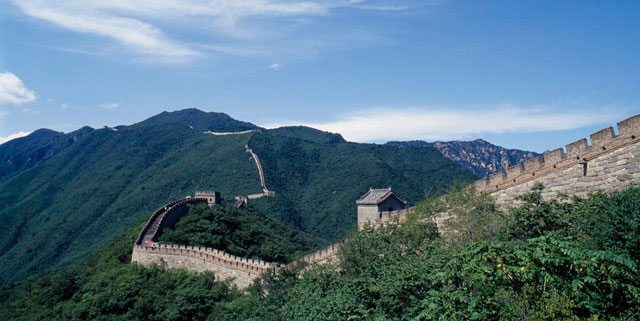 China’s retail sales are expected to rise 13% in 2014, according to its vice commerce minister. And a former Japanese commerce official says China is the world’s fastest-growing major retail market with expected retail sales to reach $5 trillion by 2016, surpassing the U.S.  A key link in achieving this growth? E-commerce.

"Smart western brands like Gap, H&M and Zara are opening both online and brick and mortar stores at the same time in order to drive cross-traffic."

“Worries about pollution may be making consumers shift to online shopping even faster,” Fang says.  “So brands absolutely need an online retail presence to reach their customers where they are looking to buy.  And increasingly, retailers need to be accessible on mobile devices, as purchases are starting to shift from home computers to phones and tablets.”

However, Fang says, it would be shortsighted of brands and retailers to eschew brick and mortar locations.

“Having a physical presence is still important to give a clear sense of the brand’s values and scale, and allow consumers to see and touch products up close before buying them.  Smart western brands like Gap, H&M and Zara are opening both online and brick and mortar stores at the same time in order to drive cross-traffic.”

On average, Chinese consumers say they spend about 2,392 RMB ($392) on clothes each year, up 7% from 2,244 RMB ($368) in 2012, according to the Cotton Council International and Cotton Incorporated Chinese Consumer Survey.  Average apparel spending is up from 2012 to 2013 regardless of demographics.  Chinese consumers buy their apparel at a variety of places; the majority of Chinese consumers shop for clothes at specialty (57%) or department (54%) stores, followed by independent stores (46% – up significantly from 40% in 2012), hypermarkets (29%) and the Internet (11%).

China’s government has been working to decrease the country’s reliance on investments and exports by steering its residents toward consumption.  Recent data released by China’s National Bureau of Statistics show China’s year-over-year retail sales grew 13.1% to 23.44 trillion yuan in 2013.  Overall GDP growth was 7.70%, with consumption accounting for 50% of that increase.

The importance of e-commerce cannot be overlooked.  In a report on China’s e-commerce revolution, McKinsey Global Institute pointed out that China has the world’s largest online population, with 130 million residential broadband accounts.  China’s e-tailing industry posted 120% compound annual growth since 2003.  And last November, China’s “Singles Day” — a day that originally started in the ’90s so single men could drown their sorrows with a drink — generated $5.75 billion for Alibaba, China’s biggest online shopping company.  Men and women, single or married, help set this record for one day of online sales anywhere in the world.

While pointing out that China’s broadband penetration is only 30%, McKinsey predicts the country’s online sales could reach $650 billion by 2020.

The potential is tremendous for apparel manufacturers.  The Chinese Consumer Survey shows more than 8 of 10 Chinese consumers (88%) are “very or somewhat optimistic” about economic conditions in their household over the next year, followed by economic conditions in China overall (76%) and the global economy (63% — up significantly from 56% in 2012). Further, the majority buys new clothes for need-based reasons, such as seasonal change (63%) or replacement (60%), rather than because they’re attracted by promotions (29%) or to be trendy (22%).

To capitalize on this, Fang says Western brands need to more clearly market themselves, as Chinese consumers are becoming more sophisticated and altering their purchasing patterns.

“They are doing more and more research on brands, looking at how they are perceived in their home markets, not just in China,” he explains.  “So if there is a big difference in positioning and price, which is the case for brands like Nine West or Swarovski, they are starting to wonder why and whether they are truly worth it.”

Fang says the biggest cities are becoming less and less attractive to Western brands as the level of competition is intense, and employee salaries and rents for stores are soaring.

“It’s getting a lot harder to make money there,” he says.  “The more attractive opportunities going forward are in smaller cities, not just second-tier cities like Hangzhou but Tier 3 and 4 cities as well.  Brands like Forever 21 that have entered more recently are making a mistake by focusing too much on big cities like Shanghai and Beijing.  They need to go into smaller cities more quickly.”

Those Pesky Kids Are Showing Up