There’s a funny thing going on in the world of marketing right now. If design, retail and manufacturing execs hear one word over and over throughout their days, it’s “personalization.” Companies are expected to use data to zero in on the exact preferences of every potential client to give them exactly what they want, no matter their age. Yet brands still rely on generalized markers to reach each population. Knowing the finer points can make a big difference in the bottom line.

Each generation differentiates itself in so many ways, including how they shop, consume news, watch TV shows and movies, and use social media. So it’s up to marketers to home in on those differences before they can even craft all those personalized messages. Kind of makes “Mad Men”-era one-size-fits-all print ads seem like a walk in the park.

For apparel marketers, there is a lot of interest in “influencers,” people who other people want to emulate, and then wear what they’re wearing. But among the majority of consumers, regardless of generation, most (61 percent) are getting their apparel ideas from what they already own and like, according to the Cotton Incorporated Lifestyle MonitorTM Survey. And even though they’re at opposite ends of the age spectrum, Boomers (66 percent) and Gen Z (69 percent) prefer their own senses of style even more.

Consumers also get clothing ideas online (34 percent), although among Boomers, the number drops to 22 percent, while among Gen Y, the figure jumps to 46 percent, according to MonitorTM data. Store windows and store displays help 33 percent of shoppers overall, the most being Gen Xers at 38 percent, and the least being Gen Z at 27 percent.

But traditional methods of reaching consumers get far less traction. Fashion magazines are used as a source for apparel ideas by just 15 percent of shoppers, according to Monitor research. Again, Boomers and Gen Z are alike in that just 12 percent are influenced by the mags, while the same can be said for 17 percent of Gen X and Millennials. Catalogs influence 13 percent overall, with Boomers and Gen X the most at 15 percent, and Gen Z the least at 7 percent.

But celebrities provide something of a different force. Among Boomers, celebs hold practically no sway (3 percent), according to MonitorTM research. But star power rises as the age groups become younger. Among Gen X, celebrities are seen as a source of apparel ideas by 9 percent, among Millennials it jumps to 15 percent and it reaches 18 percent with the Gen Z crowd.

For anyone rusty on the age break down, it goes like this (keep in mind the experts often differ on when generations begin or end, which means sometimes the years overlap): 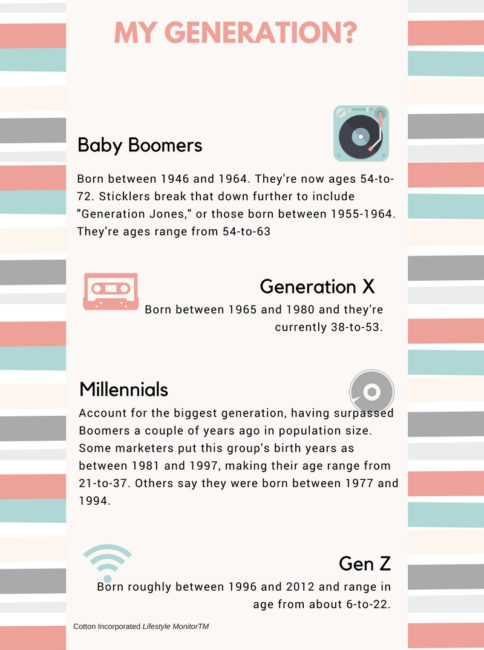 Preparing for the ‘Silver Tsunami’

Overall, when it comes to shopping, Boomers present the greatest purchasing power. Marketers refer to the “Silver Tsunami” that’s in the offing as 78 million boomers will be turning 65 and older in the next dozen years. Fung Global Retail and Technology’s Deborah L. Weinswig, managing director, recommends brick-and-mortar stores lower shelves to make reaching items easier, but don’t place them too low, either. She also suggests bigger store signage and wider aisles for those with a cane or wheelchair.

When shopping online, a Millward Brown digital study found Boomers are more likely to use a computer (31 percent) than a smartphone (13 percent) or tablet (18 percent). The study also found that Boomers prefer to read copy than watch emotion-seeking videos. Additionally, a study by DMN3, a digital and direct marketing agency, showed the best online marketing channel for Boomers is a search engine (82.4 percent), followed by a company website (77.5 percent).

When searching for apparel ideas, most Boomers (56 percent) are likely to turn to a retailer or brand website, according to MonitorTM data. That holds true for 51 percent of Gen Xers, but drops to 34 percent of Millennials and just 24 percent of Gen Z shoppers.

When reaching Generation X, marketers should be thinking social media. A 2017 Nielsen report found this population spends an hour more per week on social media than Millennials — nearly 7 hours per week, versus 6 hours and 19 minutes for the younger set. About 80 percent of Gen Xers use Facebook and Twitter, according to data from Personal Money Service, although they might not be regularly active. The survey also found 68 percent of Gen X users make purchasing decisions based on online reviews.

Salesfloor, the retail technology platform, finds Gen Xers are conservative, and more prone to be swayed by proof of performance than flashy advertising. Also, Salesfloor finds email is the best way to reach this generation, as they check it on a regular basis and are more likely to respond to personalized offers. In-store, these shoppers are likely to rely on store associates, and look to them for guidance — but hold the upselling. They view that with skepticism.

As anyone who’s been in the presence of a Millennial knows, they’re constantly connected. Usually via smartphone. That being said, Millennials still love to shop in-store and view it as a social event — something brick-and-mortar stores should keep in mind. But Salesfloor also found 90 percent of Millennials research product reviews online, with most relying on such reviews over those from people they know. In-store, this population also appreciates the value of a knowledgeable sales associate — again, without the upselling, which is only viewed as overbearing.

Gen Z, while young, has distinct expectations when it comes to marketing and shopping. WGSN’s Andrea Bell told MarketWatch that while Gen Z might not have the purchasing power of older generations, “they are looking at product and prioritizing product in their lives.” She pointed to Tumblr and Pinterest as examples of platforms where this age group can sort and share what they like.

Perhaps most interesting for traditional stores: Gen Z prefers malls for shopping, according to a survey from PwC, the professional services consulting firm. Malls are three times more popular than other types of stores, including outlets and downtown shops, with Gen Z consumers. Considering these young shoppers are the progeny of the “Generation Jones” Boomers — those who grew up during the shopping mall boom — perhaps going to the mall (albeit an updated space with better food options, entertainment and experiences) is in their DNA.