We live in a time when brands may very well be making clothes halfway around the world. This is also an age when customers want newness both in-store and online every few weeks. They also like the idea of customizing their apparel. And did we mention, some consumers are excited by the idea of same-day delivery via drones? Figuring out these logistics has made supply chain management super valuable. Now, with some of the new technology it’s employing, it might start seeming a little sexier, too.[quote]

Online and in-store apparel shopping are converging to the point where some in the field have even stopped using the term omni-channel — as all channels are to be seamless for the customer. And if time is money, speed is gold. So when a customer wants something as relatively simple as, say, a pink sweatshirt that’s exclusive to one retailer, stores and brands are feeling the pressure to step up their game in order to serve customers and exceed their expectations.

This desire to fit more satisfaction into a tighter, more efficient timeframe has led some major companies like Nike, Adidas, and Under Armour to engage in supply chain practices that shorten the distance from A to B, or shelf to customer. Target Corp., also last year invested more than $2 billion to upgrade its supply chain infrastructure. Target’s goal is to improve ecommerce sales, localize assortment in stores, and open more smaller-format stores in urban markets

Hyper effective practices are aggressive, but practically a necessity in today’s retail market. Almost half of all consumers (47 percent) say they want their favorite apparel store to offer new styles once per month or more often, according to the Cotton Incorporated Lifestyle Monitor™ Survey. Among women, that number jumps to 55 percent, and it reaches 65 percent among shoppers under 35 years old — the coveted Millennial sector. 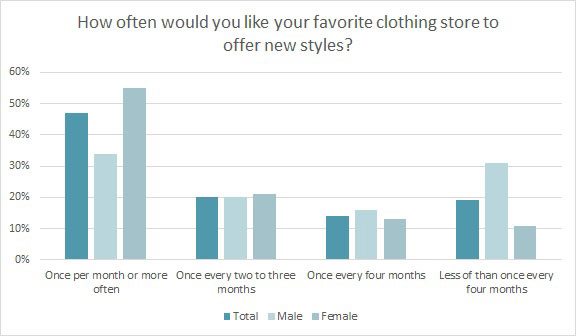 Further, nearly a quarter of all shoppers under 35 years old (22 percent) and 17 percent of women would like to see new styles every two weeks, according to Monitor™ research.

While that’s a lot of newness to produce, it provides an opportunity for retailers. That’s because 54 percent of consumers say they’re more likely to buy clothes from a store that has new clothes every few weeks, the Monitor™ survey finds. That number jumps to 61 percent among women, and 67 percent among those ages 25-to-24.

To that end, Nike Inc. took the bull by the horns last summer and joined with private equity giant Apollo in a venture that aims to increase regional manufacturing capabilities, enable quicker delivery of more customized product to consumers, and drive investment in sustainability.

The Nike/Apollo partnership saw Apollo buying existing apparel suppliers and textile firms in North and Central America, with plans to invest in advancing their manufacturing operations and expertise in producing innovative, technical and customized apparel. The idea is to create a more nimble, vertically integrated system, from material suppliers, manufacturers and embellishment to warehousing and logistics.

“We are excited to be working with Apollo to rethink a new supply chain model to revolutionize apparel manufacturing in the Americas,” said Nike’s Eric Sprunk, chief operating officer. “The new company, under Apollo’s leadership, is committed to embedding sustainability and transparency into the business, investing in new technology, vertically integrating critical elements of the supply chain, and delivering the best Nike performance product to our retail and sports partners.”

Nike’s venture would appeal to the 76 percent of consumers who are likely to buy from a store that offers apparel that is made in the USA, according to Monitor™ data.

Another active giant, adidas, is looking for an inside edge on this desire for customization with its new production facilities, each of which is dubbed a “SPEEDFACTORY.” An Atlanta site is scheduled to open in 2017, joining an existing facility in Germany. The factories use robotic manufacturing to produce footwear that can be customized to the needs of individual consumers.

“For years our industry has been playing by the same rules manufacturing product remotely in Asia,” said adidas’ Eric Liedtke, group executive board member, responsible for global brands. “…We are obsessed with bringing all steps of the creation process home to America. We’re fueling design at the ground level of creativity in Brooklyn and reinventing manufacturing with the first adidas SPEEDFACTORY in Atlanta. This allows us to make product for the consumer, with the consumer, where the consumer lives in real time, unleashing unparalleled creativity and endless opportunities for customization in America.”

Like the German facility, the U.S. adidas factory will be equipped with cutting-edge manufacturing technologies, allowing it to “create products in increasingly high volumes with advanced complexity in color, materials and sizes” as well as, “unprecedented customization of high-performance products with unique fit, comfort and look.” Both facilities are operated by the firm’s strategic partner Oechsler.

While adidas’ locations are dedicated to footwear, Under Armour’s new UA Lighthouse center in Baltimore is bringing cutting edge technology to both footwear and apparel. The facility uses 3D design and body scanning to create custom product while reducing waste in the development process. It’s also using 3D printing and rapid prototyping. And it will serve as a proving ground to see how concepts will perform in a full-scale production environment. Under Armour has partnered with a number of organizations in this venture, including The University of Maryland’s engineering department, the Dow Chemical Company, Huntsman, Lectra, Bemis, Epson, Desma, and 3dMD, among others.

Said Under Armour’s Kevin Haley, president of product and innovation, “We are excited about this game-changing opportunity and the endless possibilities created by bringing together our talented team and our world-class partners, to pioneer the future of design and manufacturing.”