New York Fashion Week just wrapped, award season is upon us with nightly celebrity red carpet sightings and social media is awash in all of it. Not only can the posts serve as fashion inspiration, increasingly there’s the possibility of buying the designer looks via in-app purchasing. So far, consumers aren’t taking to social media shopping as quickly as anticipated. But that could change as users become more comfortable with such transactions. And brands need to be ready.[quote]

“It’s reduced the friction involved from product discovery to purchase,” Smith says. “Whether a swipe up from Instagram, a carousel ad in Facebook or a YouTube pre-roll ad with a direct link to a product, the sales cycle has shortened dramatically since the buyer journey occurs in a single medium. This consumer experience, coupled with re-targeting and re-marketing technology, makes growing niche brands quicker than ever.”

A survey from SUMO Heavy, the digital commerce consulting firm, found that while social media usage remains high and its influence is increasing, consumers are leery about making purchases through a social app. In its “2018 Social Commerce Revisited “report, SUMO found 58 percent of respondents said social media influences their purchasing decisions, compared to 45 percent in 2016. However, 82 percent of consumers have yet to use a social buy button or other form of social commerce to make a purchase. SUMO found consumers have security (71 percent) and privacy (65 percent) concerns, and 64 percent wonder if social commerce is legitimate.

Another point to consider is that when it comes to apparel buying, most consumers (71 percent) prefer to make their purchases in a physical store versus online (29 percent), according to the Cotton Incorporated Lifestyle Monitor™  Survey. The top reasons cited include making sure the clothes fit (74 percent), the ability to try on clothes (73 percent), seeing an item in person (67 percent), feeling the fabric (53 percent), and avoiding shipping costs (44 percent). 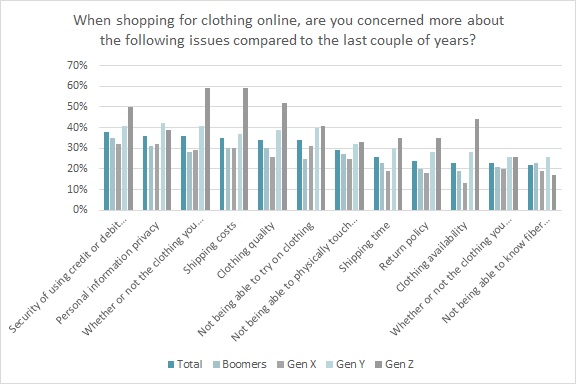 Also, consumers are skittish about shopping for apparel online because they say in the last couple of years they’ve become more concerned with a number of issues, including the security of using credit or debit cards (38 percent) and personal information privacy (36 percent), according to Monitor™ research. They’re also more concerned with whether or not the clothes will fit (36 percent), shipping costs (35 percent), clothing quality (34 percent), not being able to try on the clothes (34 percent), not being able to physically touch the clothes (29 percent), shipping time (26 percent) and return policies (24 percent).

However, consumers are increasingly using social media sites to gather clothing ideas. The degree to which they use social and the platforms of choice depend on their age. For instance, Baby Boomers aren’t heavily influenced by social platforms. But those who are will likely to turn to Facebook (16 percent) and Pinterest (14 percent), followed by Instagram (5 percent), Twitter (2 percent), and Snapchat and Tumblr (both 1 percent), according to Monitor™ research.

Social influence takes a serious jump with Millennials, who the Monitor™ research shows are more likely to turn to Instagram (48 percent) and then Facebook (45 percent), followed by Pinterest (41 percent), Twitter (15 percent) Snapchat (15 percent), and Tumblr (12 percent).

Not surprisingly, Gen Z is swayed the most by social media. They get the clear majority of their apparel ideas from Instagram (62 percent), according to the Monitor™ research. That’s followed by Pinterest (41 percent), Snapchat (28 percent), Tumblr (25 percent), and Twitter and Facebook (both 22 percent).

Even if consumers are slow to buy directly in an app, SUMO research says 48 percent of its research respondents say they’ve purchased products or services they discovered through social media, a significant uptick from the 42 percent reported in 2016. Additionally, 58 percent say social media influences a purchasing decision, even if it’s not where the product or service was discovered. Brands and retailers should be poised to capitalize on this usage and influence.

AmpliPhi’s Smith says brands that want to grow in-app purchasing might consider options like generous return policies, the ability to “choose three sizes and send back the two that don’t fit,” or include custom tailoring in the price. He also says brands need to make it easy for consumers, regardless of generation or tech ability. Also, Smith says that while older generations are less likely to try what younger generations view as intuitive, especially within apps — such as swiping up to shop on Instagram — it’s important that retailers don’t assume potential buyers know what to do next. Explicit instructions, such as stating “tap to buy,” “click to buy,” or “tap the link in our bio,” should be a staple in their social posts.”Dynamic ad placement is an amazingly powerful technology, and the most successful online retailers are using product catalogs in Facebook and other social networks to generate higher customer lifetime values,” Smith says. “Since the social networks already have the customer data available, retailers simply need to integrate their online stores to realize the benefits.”

Smith also points out that social shopping can drive customers in store, as well.

“In fact, unless an in-store retailer has a really, really well-refined customer data collection process, I would argue it’s actually better to acquire customers online. Think about it: you visit a store or restaurant, spend money there, and they have no idea how to build an ongoing relationship with you because they didn’t request your information. Online transactions give businesses myriad opportunities to both collect data and further that customer’s propensity to become loyal,” Smith states. “Whether through email offers, text messaging, or retargeting technology with in-store offers, customer lifetime value can be dramatically increased through a proper nurturing process.”