Every week we read about the flux that retail is experiencing. But whether consumers are shopping for new clothes in-store or online, the bottom line is they’re still purchasing apparel. However, with all the choices and all the distractions out there, making and maintaining a connection has become hyper important. And a lot of that has to do with the seamless connection that runs from a brick and mortar location to a shopper’s online experience.[quote]

Smartphones have changed the way we shop — and the way we browse. We used to walk into our favorite stores and see what the latest offerings were each season. If we wanted to save a few dollars, we’d wait until the middle or end of the season for a sale. Now, we see what’s new from major and up-and-coming designers via social media. And we can shop the best price from our phones. It might be tempting to think price is the only thing — especially when Back-To-School and holiday ads scream about discounts. But the experts say think again.

“There’s actually some data emerging that says if you get past the consumer’s knee-jerk answer of ‘low price over all,’ you actually get to more interesting information,” says RSR Research’s Paula Rosenblum, co-founder and managing partner at the retail market intelligence firm. “Successful brands have other attributes: convenience, clothing styles, something that makes the shopper identify as ‘this is me,’ a fun customer experience — and yes, the sense that you’re not getting ripped off price-wise.”

When purchasing new clothes, the top purchasing factor is fit (97 percent), followed by comfort (96 percent), and then price (93 percent), according to the Cotton Incorporated Lifestyle Monitor™ Survey. That explains why the large majority of consumers (75 percent) still prefer to purchase their apparel in a physical store. However, when it comes to browsing, consumers are equally split between browsing online or in-store (both 50 percent). 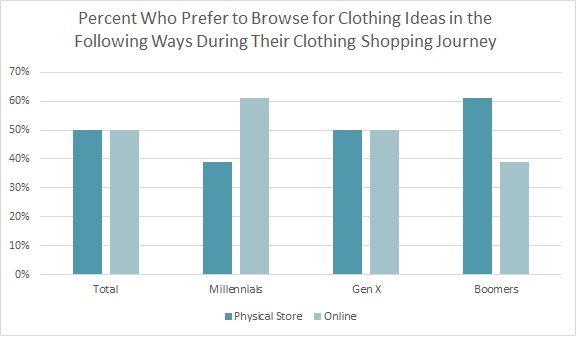 While the online/in-store experiences clearly differ, consumers would like to see some aspects of each platform brought to the other. For instance, online shoppers often get tripped up not knowing whether or not an item will actually fit. But in-store customers might well find checkout to be a “friction point,” especially at a large department store where it’s hard to even find an open register. And while online consumers will often find a reduction even if it’s through a third-party couponing site, in-store shoppers often feel they’re losing out if they don’t have a coupon.

Rosenblum points out that retailers trained consumers to look for discounts and coupons. That’s led to more than half of all consumers (56 percent) saying they are less loyal to brands that do not offer sales, discounts, and promotions, according to Monitor™ research. However, fully 70 percent say they would be more loyal to stores and brands that gave then the ability to customize their apparel. Another 63 percent said they would feel more loyal if the clothes were made of natural fiber such as cotton or wool. And 57 percent say they would feel more connected if a brand or store educated them on their products.

“When we’re talking about what retailers do well, we need to consider the value proposition,” says RetailNext’s Shelley Kohan, vice president of retail consulting. “Value is not money, but it encompasses convenience, money, and time. So, you have to offer the products that consumers want at the price they want to pay, it has to be convenient to acquire and it can’t require a lot of time to purchase it. This is what makes it seamless.”

Kohan says companies that give a true seamless experience have invested a lot “back of house.”

“The customer won’t see it, but successful brand or store builds an infrastructure to connect various retail touch points,” Kohan says. “And you can collect all the data you want, but data without insights is useless. Insights give them action to actually target their customer. Today’s customers expect a personalized marketing plan and relevant product information. They’re saying, ‘Hey, retailer, you’re collecting all my data, you need to send stuff that’s relevant to me.'”

Rosenblum agrees. “It’s partly about the data. But it’s also about the commitment, the employees, and the technology to make it seamless. You need data to make most processes effective, but without commitment and knowledgeable employees, it’s sort of empty.”

Rosenblum adds that consumers are much more bullish on an experience in-store that’s different from what they get online — and retailers are still struggling to figure out what that means.

“It means different things, depending on the environment. Malls must re-create interesting experiences,” she says. “Within the store itself, it depends on the store model. In many retail verticals, it starts with knowledgeable employees who can be genuinely helpful. In other types of retailers like a big box, it can be as simple as better signage. In all cases, there just needs to be more fun. It can be as simple as sampling some kind of food, like at Costco, for example. It can be as complicated as private sales for valued customers.

“What it cannot be is pure self-service. Consumers can self-serve at home, on the web and not have to deal with traffic, crowds, and employees who know less than they do.”

Even though shoppers admit to being less loyal than they used to be, when it comes to shopping online the clear majority (70 percent) buy brands they know and trust rather than those they’ve never heard of, according to Monitor™ research.

That fact could come into prominence when consumers start using digital assistants like Alexa and Google Home to place shopping orders. Kohan says if a shopper knows the size and fit of her denim bottoms, it would be easy to call out, “Hey, Levi’s send me these jeans.” But she says the potential can go beyond replenishment items.

“Take Stitch Fix, which is amazing because its users have worked hard to build a profile,” she says. “I don’t know if Stitch Fix has started with voice commands, but potentially you could say, ‘Hey, Stitch Fix, send me an extra shipment.’ And the clothes will all fit and be the styles you like because they have all your preferences in their data. It won’t replace the excitement and discovery of in-store shopping. But it’s one way apparel brands and retailers could be part of voice command shopping.”