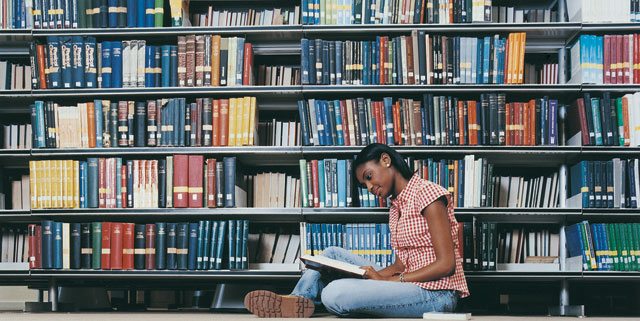 The school year may have only just ended, but retailers already have their eye on the second-biggest season of the year: Back-to-School.  And while stores will wait to exhale until the end of September, signs are (cautiously) pointing to a decent season ahead.


"At this point, retailers are prepared to be very promotional -- it's very competitive."

“I think it’s safe to be optimistic,” says the National Retail Federation’s Kathy Grannis, spokesperson.  “Retail sales have performed moderately well the last few months, and confidence is increasing.  But one of the big questions is, can this optimism last?”


The NRF’s BIGinsight survey shows 77% of families with students in grades K-12 say the economy is impacting their school spending plans.   Almost 26% of these parents will ask their children to dig through their closets and look under their beds to find items they can reuse for the upcoming school year, up from 23.5%.

Ever since the Great Recession, parents have been more cautious in their spending.  For this 2013/2014 school year, those planning to buy apparel expect to spend an average of $231 on back-to-school clothes, relatively flat from last year ($227), according to the Cotton Incorporated Lifestyle Monitor™ Survey.  More than half (57%) plan to spend the same amount as last year, while 26% expect to spend more and 13% less.

“But nobody’s gung ho, like there will be a great back-to-school,” she says.  “People are so price sensitive, especially kids and parents. At this point, retailers are prepared to be very promotional — it’s very competitive.”

CNBC reported that consumers should expect “big promotions and marketing tactics” from Walmart and Target as wrangling for customer dollars heats up. In fact, according to the Cotton Incorporated Retail Monitor™ Survey, sale offerings are the highest in the third quarter of the year at mass, department, and specialty retailers.

The International Council of Shopping Centers expects 2013 BTS sales will increase 3.1% over last year.  Mike Niemira, vice president of research and chief economist, writes in his economic commentary that consumer confidence and disposable income growth will be the key drivers of BTS spending.  He says even though improved confidence will provide a stronger catalyst for spending, income is growing at a slightly slower pace than last year, “and that matters more.”

The Conference Board Consumer Confidence Index increased for three consecutive months as of the end of June, where it reached 81.4, elevating it to its highest level since January 2008 (87.3).

The boost is due to a flurry of positive economic news.  Summer kicked off with decreased gas prices, averaging $3.57 a gallon.  The Commerce Department said U.S. construction spending rose 0.5% in May. And the National Association of Realtors said existing-home sales rose 4.2% in May from April, and are 12.9% above the year-ago pace.

American manufacturing expanded in June, as well, especially in the auto industry.  And orders for durable goods rose 3.6% in May.  Finally, the ICSC expects U.S. chain stores sales for June to increase 3%-to-3.5%.

Even with all the good news, 63% of consumers are concerned that the prices of BTS clothes will be higher than last year, the Monitor shows.

Overall BTS spending increased significantly last year to $688 per household, from $603 in 2011, according to the NRF.  But from 2010 to 2011, it increased just $3, Grannis says.  Clothing and accessories, excluding shoes, are the biggest parts of families’ school budgets, trumping electronics.  Last year, they accounted for 35% of the average household BTS spending.  The U.S. Census Bureau says consumers spent $8.5 billion at family clothing stores for 2012 school clothes. 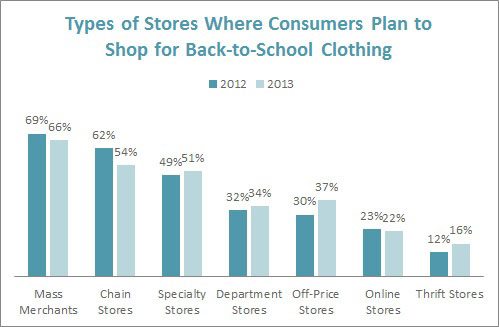 To generate excitement for the season, Teen Vogue is promoting the second Back-to-School Saturday on Aug. 10.  Some 45,000 stores, including 50 Simon and 20 General Growth Properties’ shopping centers, will participate in a day of special events and promotions.  It will be boosted by a live Twitter feed, Instagram integration and an app for simplified gift-with-purchase redemptions.

Consumers are likely to come across these events in their search for the perfect jeans and tees.  The Monitor shows 66% plan to shop for school clothes at mass merchants, followed by chain stores (54%), specialty stores (51%), off-price stores (37%) and department stores (34%).

Black says she feels good about four stores in particular: Nordstrom, for its selection and reasonable prices in its Savvy section; Gap, for the wear-now selection at both Gap and Old Navy; Victoria Secret, for its PINK collection; and American Eagle Outfitters, whose merchandise mix makes it a “go-to BTS destination.”

“Back-to-School is much less of a discretionary type of event,” Grannis says.  “Kids go through growth spurts and need to get new clothes.  But the season is also based on economic concerns.  So continued consumer optimism is a big consideration.”