There is a consumer-clothing trend to buy fewer, longer lasting items often at higher price points. But Americans have a complicated relationship with price and apparel. According to the Cotton Incorporated Lifestyle MonitorTM survey, nearly 3 in 5 consumers (58 percent) believe that higher-priced clothes are better quality than lower-priced apparel.

YPulse, the youth, marketing and Millennial research firm, reports that young shoppers are the one who are truly opting for longer lasting, more practical apparel — at the peril of fast fashion retailers. YPulse says Patagonia is leading the pack, with sales that have quadrupled in the last decade and doubled to $800 million from 2010 to 2016. The firm reports that The North Face, Fjällräven, Dickies and Birkenstock have also done well with young consumers lately. In fact, 68 percent of 18-to-35-year-olds said they’d be more likely to buy an item labeled “durable” and the trend shows in their shopping choices, according to YPulse.

MonitorTM data show more than three-quarters of consumers (78 percent) believe that in clothing, “you get what you pay for,” However, nearly all consumers (94 percent) say price is important in their apparel decisions, up from 91 percent just two years ago. 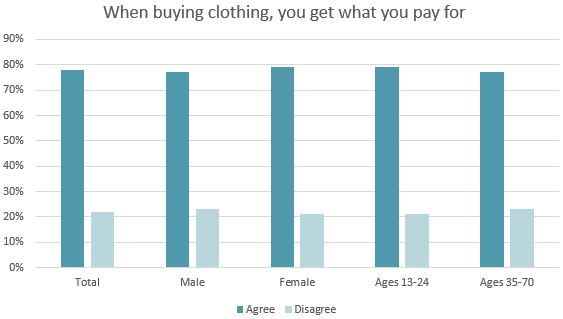 “All these Gen Z-ers, they just like to buy what’s dope right now,” he said recently after a panel discussion for EDITED, the fashion retail analytics company. “Young people want to know, ‘What do I need to wear now to get into this club.’ Champion and Puma are back. That’s a direct reflection of there being a new Gen Z group that’s going to vintage stores.”

Gen Z and Millennials actually constitute the largest percentage (59 percent) that believe higher-priced clothes last the longest, according to MonitorTM research. That compares with 43 percent of those 35-to-70.

As it turns out, when shoppers talk about price being a driver, they really mean it. Mass merchants like Walmart, Target and Kmart are the top store for most clothes purchases (22 percent). That’s followed by chain stores like JC Penney and Kohl’s (21 percent), department stores like Macy’s, Dillard’s and Beall’s (15 percent), specialty stores like Gap, Lane Bryant and American Eagle (10 percent), online (9 percent), off-price stores like Ross, TJ Maxx and Marshalls  (9 percent), and fast fashion stores like Zara, H&M, Uniqlo and Forever 21 (6 percent).

Interestingly, at EDITED’s panel discussion entitled, “Where Do Trends Come From Now?” Katie Smith, retail analysis and insights director, pointed out that there is very little difference in sell-out speed between items at Zara and Gucci in spite of very different price points.

“Zara’s is $46 and Gucci’s is $1,341,” Smith said. “And we can look at how that behavior has changed over the last three years. We can see that it has sped up dramatically. Luxury and fast fashion consumers aren’t behaving that differently. Stuff is moving fast, despite the ways brands are stocking into trend.”

The Balance financial website reported 2017 fourth-quarter consumer spending increased 3.8 percent, with nearly one-quarter of that being spent on non-durable goods like clothing and groceries. But it also points out that retailers have had to deal with flat incomes for a decade since the Great Recession.

“[Retailers] also had to contend with shoppers who expect higher value combined with low prices. Amazon and other online stores have stolen a lot of business. Companies who depend on either a low cost or a high-value competitive advantage have fallen behind. Instead, they must provide both. Those companies that don’t get it right could lose their customers and never get them back.”

MonitorTM research shows brands and retailers could benefit by providing better product, as half of all consumers (50 percent) would be willing to pay more for better quality, up significantly from two years ago. Males (57 percent) and consumers with a household income over $50,000 (60 percent) are significantly more likely than females to say they would be willing to pay more.

The Balance site finds shoppers are also willing to drive further to get a good deal since they have more time than money. “Not all low-cost stores are doing well. If they don’t provide the value, they are out of business. It also means that all high-priced stores aren’t necessarily doomed, as long as the customer feels they are getting a good value for the price.”

Bricks Over Clicks?Cotton as a Fall Fabric