At June’s Outdoor Retailer (OR) Summer Market, as in years before, performance technology was a big part of the show. But this time, visitors could find new developments in high-tech natural fiber apparel that come in response to consumer demand. The new styles use hold crossover appeal from outdoor activities like hiking and camping to urban settings. These natural fiber garments also have a sustainability quotient, which was a big theme at the show.[quote]

The need for more “lifestyle” outdoor apparel stems from the fact that Americans simply aren’t spending as much time communing with nature as they used to. In 2008, biologist Oliver Pergams lamented that the number of Americans fishing, camping, or otherwise engaging in nature-based activities was declining one percent a year since the late 1980s, having dropped 18 percent to 25 percent. More recently, a 2017 study conducted by DJ Case and Associates, in conjunction with state and federal wildlife and park agencies, found more than half of American adults spend five hours or less in nature each week — and the adults were satisfied with this.

It seems America’s love for, or habit of, bingeing on Netflix, scrolling on their phones, and playing video games is changing the country’s connection to nature. And that’s something the outdoor industry needs to acknowledge, according to NPD Group’s Matt Powell, senior vice president, sports industry advisor, and Julia Day, executive director, business development, sports. The pair held a panel discussion at the OR Summer Market, discussing how the industry could better appeal to consumers who want to venture outside, but for shorter periods of time using more lifestyle-driven products.

“We as U.S. consumers have changed the way we recreate,” Day said, in remarks prior to the OR Summer Market. “As recreation evolves, brands and retailers need to stay on top of those trends. We’ve moved away from weeklong treks and toward afternoon hikes and music festivals. We’re seeing the products that are selling at retail change to align with people’s shifting behavior.”

The Department of Commerce’s Bureau of Economic Analysis reported earlier this year that the outdoor recreation industry contributed $412 billion to the U.S. economy, or 2.2 percent of the current-dollar GDP in 2016, the latest year available. Multi-use apparel and accessories that cannot be linked to a specific activity, like backpacks and pepper spray, accounted for 12.2 percent, or $89.3 billion, of real gross output in 2016. In a webinar from October 2018, Day said the U.S. outdoor apparel industry accounted for $10.8 billion, up 1 percent in year over year sales ending in July. She pointed out that athleisure is still driving the overall apparel industry, as well as the outdoor sector, as Americans are more interested in comfort and looking the part than actually taking part in active pursuits.

Most consumers wear athletic apparel for many day-to-day activities, whether it’s just hanging around the house (77 percent), running errands (62 percent), or doing yard work outside (54 percent), according to Cotton Incorporated’s Activewear Study. 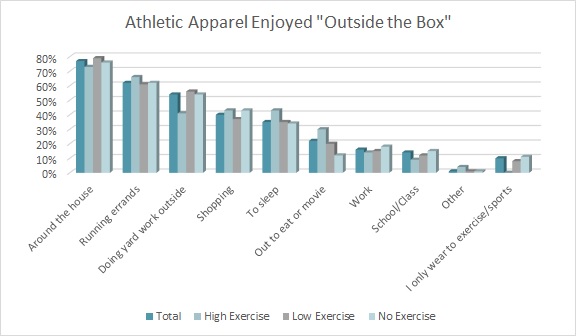 Those showing lifestyle/crossover apparel at the OR Summer Market included Dovetail Workwear. It offered its Maven slim pant, a women’s jean with four times the abrasion resistance of traditional denim that’s as good for a hike as afternoon shopping. Dovetail teamed with Cordura and Artistic Milliners to create the cotton blend denim. In keeping with the sustainability message that permeated the show, Dovetail dyes the fibers before weaving, to use less water. It will be available spring ’20.

Dickie’s was another vendor showing performance lifestyle cotton. Its Temp-iQ active waist shorts were introduced at the show. The company’s Temp-iQ technology has already been put to use on its performance hybrid utility shorts and cooling short-sleeve shirt. This latest style’s waistband hugs the wearer while providing stretch for bending or climbing, while the Temp-iQ wicks sweat to keep the wearer cool.

The show’s attendees were able to learn more about natural, sustainable fibers that feature performance technologies at Cotton Incorporated’s booth. Two dual technology options were on display. The first united TransDRY® and TOUGH COTTON™  technologies that promote a double boost of moisture-wicking and increased durability. The second option combined STORM COTTON™ and TOUGH COTTON™ technologies for a durable fabric that provides a water-repellant finish with superior abrasion resistance — all while maintaining the natural comfort and breathability of cotton.

Cotton Incorporated also teamed with Studio 317 to highlight a few cotton performance technologies in a creative garment collection that uses the latest fabric developments from Cotton’s FABRICAST™ Collection  offering. The men’s and women’s styles featured both STORM COTTON™ and TransDRY® technologies, as well as unique stitching and bonding techniques that elevate the designs.

TransDRY® technology for cotton is a patented, high-performance moisture managment application that allows fabrics to wick and spread perspiration as well as, or better than, most high-tech synthetic fabrics. STORM COTTONTM technology is a durable, water-repellent finish that keeps the wearer comfortable, cool and dry. It works with any cotton garment and can outlast other standard finishes, making it ideal for hiking, canoeing — or walking down a city street.

A natural-fiber alternative might hold appeal for outdoor enthusiasts who are concerned about the environment. A 2010 land-based biodegradability study on cotton and polyester fabrics by Cornell University found cotton fabric degrades 99 percent more than recycled polyester after 84 days. And a separate 2018 study from North Carolina State University found cotton degrades 95 percent more than polyester after 250 days in wastewater.

Outdoor apparel makers can glean further ideas about market needs by considering that walking (58 percent) is the most common form of exercise for Americans, according to the Cotton Incorporated’s Activewear Study. That’s followed by cardio training such as a treadmill or elliptical machine (44 percent), weight training (43 percent), running (37 percent), swimming (27 percent), hiking (25 percent), yoga (21 percent), and aerobics (18 percent).

The Activewear research also found that those who exercise more have higher participation levels across outdoor activities like camping (13 percent), hunting (8 percent), skiing or snowboarding (6 percent), boating or sailing (5 percent), and rowing or crew (3 percent).

But overall, the Activewear research found that the largest group of exercisers went for moderate exercise three days a week (51 percent).

Perhaps that’s why NPD’s Powell said the industry is “too focused on the pinnacle consumer.”

“That’s not where the money is,” he said. “The money is in family camping, weekend usage, and car camping as opposed to three-week hikes. I think the industry has let the everyday business really get away from them. I’m not saying we should abandon pinnacle; that’s a core competency in bringing authenticity to the brands. But if that’s all we’re doing, we’re leaving out most of the population.”