An Increase in Activewear

When people think about who buys active apparel, they generally think of young consumers. After all, young people have more time, more energy and less aches and pains than the older population. And there’s one country where young people outnumber everyone else: Mexico. Making it prime country for marketing activewear.

"It is expected that the number of people who practice some sports activity regularly will continue to rise, either via some of the newly arrived gym chains or via outdoor activities such as running, skating or riding a bicycle."

The Euromonitor has found that the Mexican activewear market is heating up, after years of being dominated by a couple of industry powerhouses — Nike and Adidas — making room for more brands to move in.

This increase in the activewear market can be attributed to a few different forces. In a report from the Pan American Health Organization, it was noted in 2012 that half of Mexico’s 112 million residents are 26 years old or younger. Children aged 0-to-14 years old accounted for more than 32 percent of the population in such states as Chiapas and Guerrero. While PAHO notes that the national average life expectancy is 77 for women and 72 for men, the country as a whole has taken steps to improve the health of its population, allowing them to live, work and stay active even longer, which means an opportunity for activewear brands.

That’s because despite its youthful population, Mexico, like its U.S. neighbor, has an obesity problem. The World Health Organization found nearly 7 of 10 (69 percent) Mexican adults are overweight or obese. It narrowly beat the U.S., which finds two-thirds (66.3 percent) of its adults in the heavy-set category.

In 2009, Mexico introduced the Five Steps program to support healthy lifestyles. The steps call for residents to: move, drink water, eat fruits and vegetables, measure themselves, and share their experience with friends and family.

“National health policy emphasizes the promotion and prevention of diseases such as cancer, diabetes, and hypertension,” wrote Dr. José Ángel Córdova Villalobos, Mexico’s former federal health secretary and an adviser with the World Federation for Medical Education, in the AARP Journal. “Therefore, there is a need to build a new health culture involving public, social, and private sectors, which are already sensitive to the topic and becoming valuable allies to support the policy.”

Not only does Mexico have a national mandate to become healthier, its economy is expanding, giving shoppers the ability to fill pent up demand for workout gear. Bloomberg reports that Mexico’s gross domestic product rose 2.7 percent earlier this year, beating forecasts of 2.4 percent. Consumers there are spending more as inflation stays near a record low.

When comparing Mexican exercise activities to those of U.S. consumers, both are geared toward cardio activities like running, walking and training, according to the Cotton Council International and Cotton Incorporated 2016 Activewear Study. But Mexicans are more diverse, indicating their needs for multiple types of activewear garments. 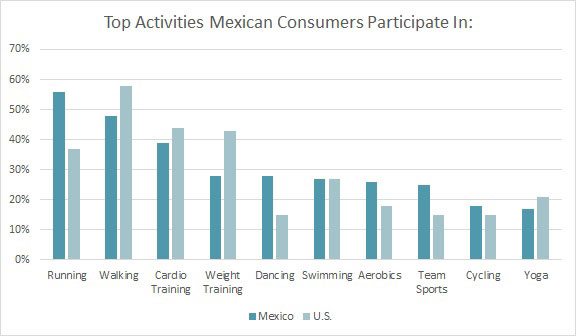 The Euromonitor finds Adidas de Mexico SA de CV and Nike México SA de CV collectively accounted for a 15 percent retail value share in 2015. The Euromonitor says both companies are by far the most aggressive in terms of marketing campaigns and the development of new products for men, women and children. Due to their long-standing presence in the market, the Euromonitor says Mexican consumers are especially loyal to them.

In fact, the CCI and Cotton Incorporated Activewear Study finds 94 percent of consumers cite a favorite activewear brand that they purchase most often. That compares to 85 percent of Americans. Nike accounts for more than half (52 percent) of activewear brands purchased most often by Mexican shoppers, followed by Adidas (22 percent).

However, the Euromonitor says more competition is coming in the form of major international players.

“During 2015, Converse Inc., and Puma SA de CV were other sportswear players that created a positive impact among consumers, who witnessed a noticeable increase of outdoor advertisement and the launch of new products,” the market research firm states.

More than 7 in 10 (71 percent) Mexican consumers say they wear activewear for exercise, significantly higher than in the U.S. (50 percent), according to the Activewear Study. And on average, Mexicans say they exercise four days a week, for 60 minutes a day. In total, they own about 41 activewear products.

The Euromonitor predicts that sportswear in Mexico will achieve a value CAGR of 6 percent at constant 2015 prices, and will reach Mx$96.7 billion in 2020.

When it comes to the types of activewear Mexican consumers prefer, the majority lean toward cotton, saying it’s the most comfortable (75 percent), sustainable (74 percent), trustworthy (70 percent), breathable (63 percent), and versatile (60 percent), according to the Activewear Study.

“It is expected that the number of people who practice some sports activity regularly will continue to rise, either via some of the newly arrived gym chains or via outdoor activities such as running, skating or riding a bicycle,” the Euromonitor predicts. “The government will continue opening places where people can exercise for free in an effort to reduce overweight and obesity problems among the Mexican population.”

Because weight problems can lead to health problems that affect citizen’s ability to work and then contribute to the economy, Mexico’s federal government has endorsed the “National Agreement for Nutritional Health, A Strategy against Obesity and Overweight,” a public health initiative that promotes healthy lifestyles via diet and physical activity through all life stages.

“Health,” wrote Dr. Córdova Villalobos, “is our country’s priority to improve quality of life and move toward a fairer, more equitable and healthier Mexico.”

A Fight to The Finish