Keeping Up with the Fast Crowd

Instagram, Twitter, Snapchat and every other form of social media have been filled with photos from the runways of the recently completed New York Fashion Week. Of course, it’s not just fashion fans who are studying these images; fast fashion companies will be moving to get similar styles to market as soon as possible — possibly in a matter of weeks. More traditional brands and retailers have sped up their deliveries, as well, in an effort to keep up with the fast competition, as well as serve a customer that’s demanding the fast business model.

"It's not just about price. I feel like there's been a subtle shift with consumers. Think about how there's been a lack of response to promotions. At some stores they have 40 percent off and that doesn't impress the consumer anymore. But fashion is more important than ever. Like the off-the-shoulder style -- that hit stores and appealed to women across the board. Stores are thinking, 'I better have the fashion assortment correct.'"

A number of designers offered see-now/buy-now fashions during New York Fashion Week. But not only are designer items out of the financial reach of the everyday customer, but they also were not offering every item from their shows for immediate purchase.  But most stores realize they can’t compete with the speed and low prices of fast fashion. Instead, they’re finding other ways to reach the customer.

“Women are responding to ‘new,’ and major department stores are responding to that,” says the Doneger Group’s Roseanne Morrison, fashion director. “It’s not just about price. I feel like there’s been a subtle shift with consumers. Think about how there’s been a lack of response to promotions. At some stores they have 40 percent off and that doesn’t impress the consumer anymore. But fashion is more important than ever. Like the off-the-shoulder style — that hit stores and appealed to women across the board. Stores are thinking, ‘I better have the fashion assortment correct.'”

“If you were in our stores in July, you would’ve seen some really beautiful, well-made feminine, brand-right tops with eyelet and lace. They were in the stores and gone in a heartbeat,” he stated. “We were over-assorted in some of our basics programs.

Regarding the fashion tops as it related to a responsive supply chain, Peck said, “We felt we had a selling opportunity as we went into August and September. And in working differently with our vendors, we actually executed several new styles in a 24-hour period, including approving samples. [We] put the PO (purchase order) out and were able to book several hundred thousand units with just …several weeks lead-time to have them back in stores. And so as we continue to scale those very responsive, in-season fashion capabilities it gives us the ability to feed the upside when we see it.”

Nearly half of all consumers (47 percent) say they want their favorite store to offer new styles once per month or more often, according to the Cotton Incorporated Lifestyle Monitor™ Survey. And nearly 3 in 5 consumers (59 percent) say they prefer to buy new and different clothes, rather than replace their current style (41 percent). 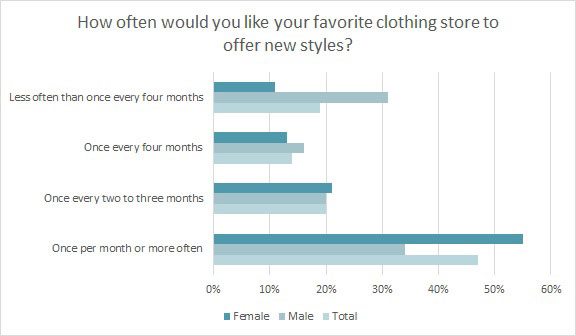 Because offering the right fashion at the right time is more important than ever, stores are working with shorter lead times, Morrison says, and waiting closer to the time of delivery to engineer the garment to the right styles.

“That was one of the reason’s we created Maker’s Row — we had a big holiday order and needed to have it made fast,” Menendez says. “For the longest time, fashion was an insider’s industry. What we’re doing is allowing the best manufacturers to make themselves visible and promote themselves. We recently launched Projects bidding, so brands can get estimates and bids directly via a cloud-based software program. Also, factories can use Projects to go in and seek out customers.”

Maker’s Row works with both major brands like Burberry, Calvin Klein and Ralph Lauren, as well as start-ups and independent niche brands.

“We do see small brands competing on turnaround time,” Menendez says. “It’s not at the same scale as the majors or fast fashion stores, but they’re doing it in small batches. They’re leveraging their relationships with the people they meet on Maker’s Row so they have flexible lead time.”

Cotton Incorporated teamed up with Maker’s Row to connect textile firms with U.S. cotton growers and manufacturers. The U.S. is the third-largest cotton producer in the world, and by teaming with Maker’s Row, the latest innovations in cotton fabrics are readily visible to production teams.

Brands and manufacturers can also see what’s new in cotton and cotton-rich textile through Cotton Incorporated’s FABRICAST™ fabric information system. Some of the newest additions to the FABRICAST™ library that were exhibited at the recent Premiere Vision in Paris included on-trend performance knits, active cotton and cotton blends, knit-look wovens, as well as textured and laser-marked fabrics. The fabrics aren’t necessarily cheaper than others, but because they can be sourced in America, turnaround time can be faster.

“The best brands are doing their research, communicating to a specific audience and building their brands around that,” she says. “And through Maker’s Row, brands can subscribe to a plan to start their search, look at response rate and see who is most responsive. Sourcing is hard, so we’re looking to help — whether it’s an internationally known name or a start-up.”

Morrison says creating conversations and relationships with customers are as important as ever.

“It’s retailing 101, really,” she says. “They all want to satisfy the customer but there are so many elements that have to be just right. It’s a very challenging time for retailers right now. So appealing to the customer with the right fabrics or working on special items from certain designers will help bring the customer in and make her feel like you’re giving her what she wants.”

Where Men Shop For Most Of Their Clothing Over Time