For so long, the male shopper was pigeonholed as one who let his significant other buy his clothes.  Or, he disliked clothes shopping so much he just wanted to end it quickly. For department stores, this meant men’s wear, stocked with plenty of basics, was located on the main floor, with multiple exits to the parking lot or street — so men could get in and out as fast as possible.

[quote]But that stereotype is changing – albeit slowly.  The U.S. men’s apparel market grew 1% in 2012, according to The NPD Group, Inc., with total sales of $57 billion, up from $54.2 billion in 2008.  This positive development is of great interest to department stores that want to keep their older, more traditional shopper and still attract the younger man who could potentially spend decades with them.

Macy’s Durand Guion, vice president and men’s fashion director, says a lot of men were forced to start buying their own clothes as women got busier. But now, many want to carve their own style.

“It’s no longer about replacing the ‘basics,'” Guion explains.  “Male Millennials are more confident and comfortable than ever regarding their shopping experience.  The Internet has helped increase their level of fashion awareness and contributes to a more focused point of view when they do go shopping.  There is a much greater ‘cool’ factor associated with the right clothes and the right look.  The in-and-out approach is still relevant as it relates to men’s shopping patterns; the difference is there is more thought put into it before they enter the store.”

This year, more than a third (34%) of men say they “love or enjoy” clothes shopping, up from 31% in 2009, according to the Cotton Incorporated Lifestyle Monitor™ Survey.  It’s about half as many compared to women (66%), yet it shows important growth. Department stores are the third most popular type of retail venue among men.  The Monitor shows 60% shop mass merchants, followed by chain (58%), department (44%) and online (32%) stores.  But men are significantly more likely than women to buy at department stores (44% versus 39%).   And men earning $75,000 or more are significantly more likely to shop department stores over mass merchants (56% versus 48%). 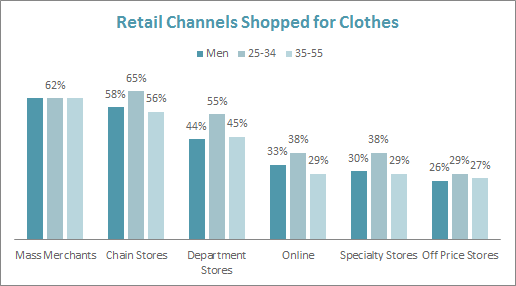 These increases were not by accident, says retail strategist Cynthia Cohen, president of Strategic Mindshare.

“Department stores have really changed their presentation,” Cohen says.  “You will find more fashionably dressed mannequins.  You’ll find athletic wear presented as casual day wear.  You’ll find more adventurous colors, again on the mannequins and front tables.  And that’s because stores know men might experiment with fashion and color, but they have to see it in-store.  Also, there’s a segment of men who are oblivious until you put it in front of their faces.”

The Parker Avery Group’s Courtney Albert, management consultant, says there has also been an increase in the number of personal shoppers and concierge services for men.

“This is a service that encourages a bigger purchase, and it still serves the need of more men wanting to invest in apparel but not the time,” Albert says.

Albert adds that younger men are attracted to lines that include accessories with their men’s wear, as well as loyalty incentives and personalized events.

“Retailers are still defining the best way to reach this audience,” she says.  “They are combining ‘masculine’ activities, such as cigar bars or bourbon tastings, with fashion. This makes the experience much more approachable and allows the retailer the opportunity to create a positive customer experience.”

Guion confirms events are a part of the Macy’s approach.

“Macy’s hosts a variety of events throughout the year that cater to the Millennial male customer, including personal appearances with celebrities and professional athletes, as well as style events with local stylists, tastemakers and key men’s publications like GQ, Details and Out,” Guion says.  “We also try to engage our customer and provide him with an exciting shopping experience by hosting in-store activities such as cigar rolling demonstrations, local craft beer tastings, shoe shining and music.”

Guion says men also respond to catalogs, online style blogs and in-store displays that confirm his shopping choices.   Also, “there is no doubt that male celebrities — especially athletes — have a big influence on what men think about purchasing.”

“But the department stores need to do it,” Cohen says.  “Even if the man isn’t working the app, his child might call it up and say, ‘Hey, the shoes I want are on the fourth floor.’  The most profitable customer is working, has an active day life and grammar school-age children.  So department stores first need to get those with potential, the men who haven’t yet had kids but they have their first job and some money.  And then stores need to keep them, keep them happy and keep telling them, ‘I’m relevant to you.'”

Fabrics of the FutureClothing Changes That Impact Satisfaction