You never know what you’ll learn when you’re researching some topics. Take underwear, for instance. Who knew that shapewear can crunch your innards as well as your flab? Geez… So much for trying to keep the fantasy going all night by slinking into bed wearing sexy compression-wear. Alternatively, some suggest going commando to let the nether regions air out during the night. Those not willing to accept either scenario might embrace the advice of experts who are in favor of breathable panties, day or night, to help keep the nether regions balanced. [quote]

The breathable aspect is important — especially in women’s underthings. It might not sound pretty, but yeast overgrows in a warm, moist environment, leading to infections. A research study in the European Journal of Obstetrics & Gynecology and Reproductive Biology associated underwear made of synthetic fabrics with infections, as it doesn’t breathe as much as natural fibers.

“Cotton allows for better ventilation,” and it naturally wicks away moisture, he said. “Too much moisture leads to friction between the skin and the garment.”

Not only is this good for consumers, but it’s what they want. More than 8 in 10 consumers (83 percent) say they mostly buy cotton-rich underwear, according to the Cotton Incorporated 2015 Intimate Apparel Survey. And more than 1 in 2 shoppers (54 percent) say they are “very or somewhat concerned” that their intimates may be made from manmade fibers. When shoppers compare natural fibers to synthetics, more than 8 in 10 (81 percent) say cotton underwear is the most sustainable, followed by softest (80 percent), comfortable (80 percent), and breathable (80 percent). 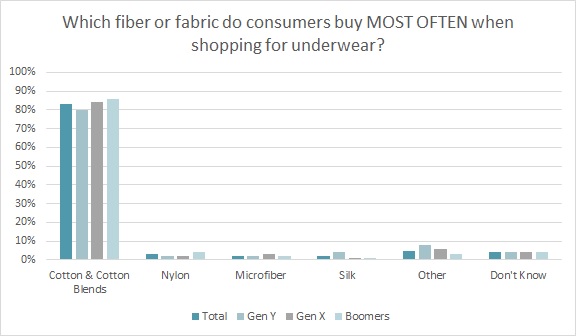 The Berkeley Wellness newsletter also pointed out that fabric choice could mean the difference between genitals feeling cool and dry versus hot and sweaty. It goes on to say that especially women prone to yeast infections should wear breathable panties.

Some manufacturers are on top of this consumer preference. Hanes offers the Cool Comfort women’s cotton panties. They’re made of 100 percent cotton, with the added element of wicking technology to keep the wearer cool all day, whether at work or exercising. Hanes’ ComfortBlend cotton features X-Temp technology, which wicks moisture and adapts to body temperature by speeding or slowing down cooling for all-day comfort. Hanes is the top underwear brand for both men (51 percent) and women (33 percent), according to the Intimate Apparel Survey data.

For women seeking something a little cheekier, Yandy has a number of fun cotton choices in their latest collections. For instance, shoppers will find green and pink cheetah print panties with a floral musk scent (it last for about 7 washes), a tropical-scented black houndstooth blue lace panty and a patchouli-scented cotton boyshort with a marijuana leaf print.

Such saucy styles might hold particular appeal among Millennials. And this is key because the Intimate Apparel Survey finds Millennials shop more often for underwear, own a wider variety of styles, spend more on underwear purchases, and are more positive and excited about underwear shopping than the average consumer.

On average, Millennials shop for new underwear once every five months, according to the Intimate Apparel Survey. That compares to the average consumer, who updates their underthings once every seven months. And while 65 percent of Millennials say they buy new undies to replace those that are worn out, 34 percent say they shop because “I just wanted them.” That compares to 25 percent of Boomers. And Millennials and GenX shoppers own about 23 pairs of underwear, compared to about 19 pairs among Boomers.

Millennials also pay more for underwear, about $15 on average, compared to $13 among GenX shoppers and $9 for Boomers, the Intimate Apparel Survey data show. On average, men pay slightly more than women: $13 versus $12.

Of course, men might want to spring for a little more if the underwear has hidden extras, like Mack Weldon’s trunk underwear, which offers cooling mesh panels and stay-put legs that won’t ride up. Or they could just splurge for the sexy appeal that comes from briefs that don’t bag with 2Xist’s Essential Fly-Front brief.

Men’s health can also be impacted by their underwear choices. Another top expert recommendation: throw out the old, stained, or raggedy pairs. A lack of support (both literally and from the wearer’s significant other) was cited as the main reason. Men are also advised to go with all-cotton or blends for everyday wear, as breathability is just as important to their privates as it is to women. And in Everyday Health, Dr. Gregory D. Albert suggests men who are trying for children might want to opt for boxers over briefs, as tighter briefs lower fertility.

As for the shapewear? Some cotton pieces are available, like the contour thong from Knockout! Panties that has a 100 percent cotton liner. But when it comes to the hardcore compression wear, experts say it can cause nerve pain that runs through the thighs, can squeeze internal organs, cause gastroesophageal disease, or even urinary tract disease since it’s hard for women to wriggle out of the body contouring garments. For health’s sake, experts suggest more natural undergarments — and keeping the painful body crunches at the gym and in the bodywear.