Last winter, the post-holiday season was pretty dismal for those in retail. As stores were shuttering doors or closing down altogether, more than one headline asked if malls were going the way of the dinosaur. To say apparel retailing has been a challenge in 2017 is an understatement. But if you look around, all of the malls and their tenants have not disappeared. So, let’s talk about evolution.[quote]

There are about 1,100 malls in the U.S. today, but a quarter of them are at risk of closing over the next five years, according to estimates from Credit Suisse. An analyst on CNBC went further; saying one-third of all shopping malls may shut down. These predictions made headlines that screamed things like “Mallpocolypse” all the more disturbing, especially as one retail chain after another — Sears, Payless, Wet Seal, Gymboree, Macy’s, JC Penney — announced store closings or bankruptcies this year.

However, and to reiterate, there has been no extinction-level event. Not all stores and malls are closing. Yes, online shopping and Amazon have definitely had an effect on shopping behavior. But retailers have also heard the message that consumers, Millennials in particular, are putting a greater importance on experiences. It seems it’s not enough to Instagram or Snap a new outfit from a store dressing room. Now, social feeds involve things like music festivals, trampoline parks, and food runs for trendy edibles like rolled ice cream and mountainous burgers.

That’s translating to centers with a smaller retail footprint, better dining establishments, and more mixed-use facilities that include residential, learning, and entertainment spaces — which is actually how malls were intended by their original architect. (More on that later.)

Despite the ease of mobile buying, the large majority of consumers (75 percent) still prefer to purchase apparel in a physical store, according to the Cotton Incorporated Lifestyle Monitor™ Survey. However, more consumers prefer to shop in “an individual, freestanding store not connected to other stores or located in a mall” (38 percent) than a mall (27 percent). Another 20 percent prefer to shop online, while 14 percent typically shop in an outdoor center where the stores are connected but each is entered individually from outside. 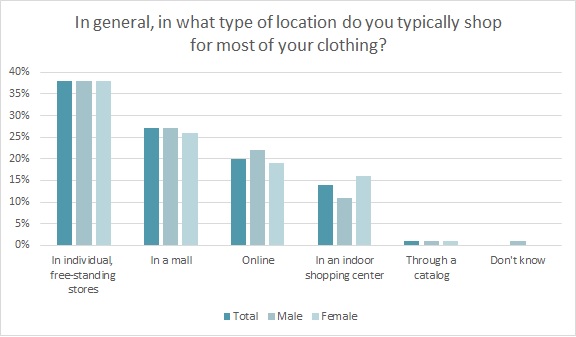 But in general, over 4 in 10 (42 percent) of U.S. consumers go to the mall at least once a month or more often, according to Monitor™ research. Males are more likely to go than females (47 percent versus 39 percent), as are consumers under age 35 (51 percent) versus their counterparts (36 percent).

Additionally, nearly half (48 percent) of those with a household income above $75,000 shopped the mall once a month or more often, compared to 36 percent of those earning under $25,000, according Monitor™ data.

Interestingly, and despite all the hype about the demise of the retail store, 68 percent of consumers say the main reason they go to the mall is to browse for or buy clothes, according to Monitor™ research. Another 40 percent shop for footwear, followed by to eat at a restaurant (37 percent), socialize with friends and family (32 percent), go to the movies (28 percent), shop for accessories like a purse, sunglasses or belt (27 percent), to walk for exercise (24 percent), buy electronics (18 percent), and shop for cosmetics (17 percent). Another 14 percent are there to buy home textiles and 13 percent like to people watch.

Innovative retailers are proving there’s more than one way to play the game. In Bloomingdale, IL, a suburb of Chicago, the Stratford Square Mall went through a renovation that now includes traditional retail stores, as well as spaces that offer fitness classes, dance and soccer lessons, and an indoor inflatable party-and-play center. And it added a bowling alley that stays open past mall hours and also provides billiards, arcade games, and karaoke.

The 2.4 million square-foot Galleria in Houston, a Simon property, underwent a two-year, $300 million renovation that saw the unveiling of a new wing in July. [Note: Despite closing briefly due to Hurricane Harvey, the mall did not sustain damage and completely re-opened for business two days after the storm] The new space occupies 110,000 square feet and includes 35 new stores and restaurants — Fig & Olive and the world-renowned Nobu, among them.

Meanwhile, Triple Five pitched a mega “retail-tainment” project in Miami in May. It would be a 6 million square-foot project that would include an indoor ski slope, water park, skating rink, hotel, theater, performing arts center, dining — and retail stores. Triple Five is also behind the American Dream mega-mall that neighbors MetLife Stadium in East Rutherford, NJ. The Mills Corporation originally began that project in 2003, before the Great Recession, mobile shopping, and changing consumer behaviors. Triple Five took over in 2011, and after many delays, it is expected to open in 2019 with an aquarium, LEGOLAND Discovery Center, a 4-D movie theater, a Nickelodeon indoor theme park, and retail stores among the mix.

This wide variety of attractions may very well be the draw for the next wave of consumers. Especially considering nearly half (47 percent) report that they, “like to walk the mall, but I rarely buy clothing,” according to the Monitor™. That’s followed by 44 percent who say, “Shopping at malls is in my past, not my future.” Still, another 44 percent say “The mall is my go-to for clothing ideas,” and 42 percent contend that it’s their “go-to to buy new clothes.”

Other developers see malls becoming truly mixed use, combining residential, office, fitness, grocery, and retail all in one center. Ironically, that may be much closer to what was originally envisioned by Victor Gruen, the architect behind America’s first indoor mall, which was built in Minnesota in 1956. A transplanted Viennese socialist who wanted to contain suburban sprawl, he wanted to give Americans a gathering place to not just shop, but to build community and feel connected. He imagined apartments, work places, medical offices, libraries, and shops all in one facility.

Of course, somewhere along the way, the shopping became paramount, sprawl continued and Gruen wanted nothing to do with the “Father of the American Shopping Mall” title. It could be though, that everyone else finally understands his original vision — and is just now catching up.

The Use of Natural FibersSubscribe Now