If the children really are our future, brands and retailers better be prepared to have a digital relationship with them.

A running joke these days is, if you go to an event and don’t post about it, did it even happen? Gen Z might very well answer, “No.” Now, take that to the next step with young consumers. If you’re not online with a strong social media presence, Gen Z might think you don’t really exist.[quote]

The Center for Generational Kinetics (CGK) released a study that showed those aged 13-to-22 are redefining who is influential in today’s marketplace. Whereas TV and movie stars or famous athletes held sway with previous generations, Gen Z is all about the crop of influencers that are springing up on social media. CGK’s study found 46 percent of this generation currently follows more than 10 online influencers (and 10 percent follow 50 or more).

This helps to explain why young people seem perpetually glued to their phones, even when their friends are right next to them. Jason Dorsey, president of the Center for Generational Kinetics, says 95 percent of Gen Z owns a smartphone and more than half of the generation use it in excess of five hours per day.

“This is their lifeline, and social media is their means to connect and learn about what they like and want,” Dorsey says. “The ‘stars’ of this generation are not those seen on TV or at a big-time concert hall. They’re the people who Gen Z follow every day on their smartphone or tablet.”

That always-online mode translates to their clothes shopping habits, as well. Nearly half of all Gen Z consumers (46 percent), planned to do more browsing for clothes online this year, according to the Cotton Incorporated Lifestyle Monitor™ Survey. That’s significantly more than Millennials (39 percent) and Gen Xers (30 percent), and it eclipses the Baby Boomers (13 percent). 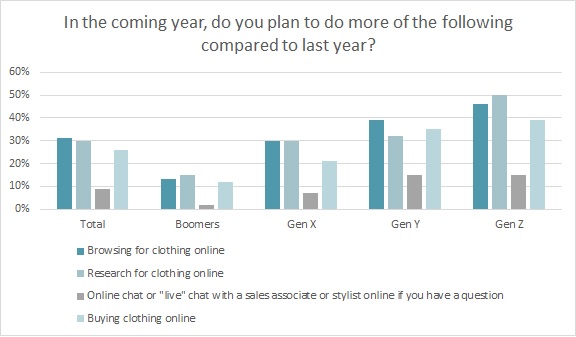 When this younger group of shoppers is looking for clothing ideas online, they’re most likely going to head to Instagram (67 percent), according to Monitor™ data. That’s followed by Pinterest (42 percent), Snapchat (33 percent), Tumblr (22 percent), retailer or brand websites (23 percent), Twitter and Facebook (both 21 percent), and ecommerce sites like Amazon and eBay (21 percent). Additionally, CGK’s research found that Gen Z spends a lot of time on YouTube, and trusts the platform’s ads more than any other type of ad, including radio, print, and TV.

Since Gen Z consumers are all over the online map, so to speak, Nielsen researchers say there is “an impending need to understand the unique preferences of this defining generation and build customized and creative campaigns that yield better results.”

Using data from a Nielsen Digital Ad Ratings, a Canadian study measured Gen Z consumers aged 13-to-17 and found that more than 90 percent of advertising impressions missed their target. Among those aged 18-to-24, just under 75 percent missed their target. To stop this ad waste, Nielsen suggests brands, agencies, and media companies leverage their own first-party data assets and combine them with third-party data to build out custom target segments.

“These segments, based on an audience’s interests, past purchases, and previous engagement, can help brands and marketers find the right audience for their message and deliver it in the most appropriate context,” Nielsen states. “This can then be further authenticated by third-party measurement and verification services to thoroughly validate the efforts and optimize toward key performance indicators (KPIs) on the campaign.”

Figuring out how best to reach these young consumers is critical, even though Gen Z shoppers plan to spend just $627 on clothes in the upcoming year, according to the Monitor™ research. This is significantly less than all other generations, as Millennials plan to spend $1,249, Gen Xers expect to spend $1,001, and Boomers will spend $589.

But in 2019, Gen Z will surpass Millennials as the most populous generation, according to a Bloomberg analysis of United Nations data. Next year, the younger set is expected to number 7.7 billion or 32 percent of the global population, edging out Millennials, who will account for a 31.5 percent share.

The Center for Generational Kinetics’ Dr. Denise Villa, CEO, says social media is not optional for brands that want to attract Gen Z as customers and advocates.

“A robust social media presence across key Gen Z platforms is an absolute must for brands,” she says.

CGK emphasizes that this younger generation is quite different than others before it, and should definitely not be considered Millennials 2.0.The firm says Gen Z expects to interact with companies and brands on social media and is doing so in greater numbers than Millennials. For instance, CGK’s study found 73 percent of Gen Z follows at least one brand on social media, compared to 64 percent of Millennials. Additionally, Gen Z uses Instagram 2.5 times more often than Facebook to follow brands.

“Whether an online influencer’s following is ten thousand or ten million, these online personalities make an immediate impact on this generation’s brand loyalty and purchasing decisions,” Villa says. “Companies need to embrace this approach, and leverage it as part of their marketing efforts, because Gen Z will ditch the companies that don’t keep up.”