This holiday season promises to be a positive one for retailers, even though the industry does not expect the gangbuster business of last year.

While Back-To-School yielded higher than expected overall sales, stores are looking at the economy, the election, and unemployment numbers before cracking open any holiday bubbly.

[quote]The International Council of Shopping Centers’ Mike Niemra, vice president, chief economist and director of research, says BTS can be a bellwether of the holiday season, but not this year.

“The backdrop for this holiday season is dependent on an external and overlying factor, which is how will Congress address the federal budget to prevent the automatic spending cuts and tax increases, in full, to kick in?” Niemira says.  “Clearly, if the automatic spending cuts are triggered (as of Jan. 1) then there would likely have been a negative financial market response ahead of that — and that is not a good environment for the season. ”

The ICSC is predicting a 2.9% increase for holiday, while ShopperTrak predicts a 3.3% bump and the National Retail Federation predicts a 4.1% increase.

“On the other hand,” Niemira continues, “if Congress compromises and passes something without the drama of front page news day-after-day throughout the holiday period, then we have the likelihood of a better performance than we are forecasting.  Tough call this year since the risks are dependent on how Congress handles the ‘fiscal cliff’ budget issue.”

Even though the economy has been top of mind and a major talking point in the presidential debates, 83% of gift givers plan to spend more (14%) or the same amount (69%) on gifts this year compared to last year, up significantly from 76% in 2011, according to the Cotton Incorporated Lifestyle MonitorTM Survey.  Gift givers expect to spend $568 this season, up 14% from $497 in 2011.  On average, those who plan to give clothing as gifts this year plan to spend $226 on apparel, up 33% from $169 last year.

BDO’s Stephen Wyss, partner in the company’s retail and consumer products practice, says the firm’s survey of retail CFOs is a positive one, tempered somewhat by the outcome of the election.

“Retailers are concerned about how consumers will react to potential changes in tax laws,” Wyss says.  This — plus the U.S. consumers’ ingrained habit of waiting for sales — will prompt retailers to continue to woo shoppers with markdowns and promotions.  “The consumer has really changed shopping habits and it’s become second nature — or first instinct — to comparison shop.  Service and quality might also come into their final decision, but everyone is more prone to comparison shop on price because it’s easier than ever before.”

More than 4 of 10 gift givers say they will be doing more comparison shopping (45%), looking for discounts on days like Black Friday (45%) and shopping around to find the best deals (43%) in order to stretch their holiday gift budgets this year, according to the Monitor.

Niemira adds that about 75% of Black Friday shoppers are looking for bargains for themselves, as opposed to gifts.

Among consumers planning on using their mobile or smart phone to shop for holiday gifts this year, 63% plan to use it to comparison shop (down significantly from 82% in 2011), followed by to locate stores (52%), purchase items (49% – up significantly from 28% in 2011) and read customer reviews (37%), the Monitor survey finds. 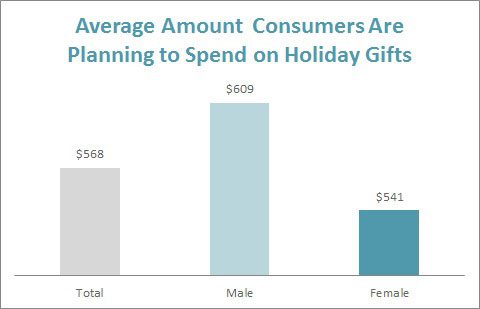 Niemira says he does not expect this holiday to be excessively promotional — unless struggling retailers get aggressive and escalate their unplanned promotions in an effort to steal market share.

“Ultimately, it is the economy that will be the basic driver of spending,” Niemira says.  “The promotions are the catalyst for ‘buy now.’  The economic conditions are mixed and that will likely cap overall spending potential.”

These mixed economic conditions are reflected in the fact that 61% of clothing gift givers plan to shop for apparel presents at mass merchants, followed by chain stores (58%) and department stores (49% – up significantly from 37% in 2011).

On the other hand, U.S. consumers are feeling more confident than they have in quite some time.  The most recent Thomson Reuters/University of Michigan consumer sentiment index increased significantly to 83.1, up from 78.3 in September.  This is the index’s highest level since September 2007.

The housing market is finally making a comeback as RealtyTrac reports foreclosures dropped 7% to a five-year low and 30-year mortgage rates increased to 3.39% from 3.36%. The Commerce Department also reported earlier this month that U.S. builders increased spending 18% from a year ago to $273.5 billion.  And the Labor Department said the country’s unemployment rate fell to 7.8%, a 44-month low.

“We know the unemployment rate has gone down a little bit, and the trend in employment been positive, even though it’s a slow process, which has a psychological effect on consumers,” Parker says.  “If I have a job, and other sectors are picking up, I might be more inclined to make big purchases.”

Making a ComebackGearing Up for the Holidays