This year’s Back-to-School shopping season was not as strong as expected, leading many in the apparel retail industry to scale down expectations for a record-breaking holiday season.  But along with jingling bells and reindeer, the industry is dealing with another relatively new tradition: wondering how much politics and the economy will affect consumer confidence.

“We’ve had this recurring theme over last three years,” Martin says.  “Consumers are desensitized to headlines, so they’ll continue to do a lot of research online and have a surgical approach to shopping.  They won’t grab a lot of impulse items.  Instead, even though they’re willing to spend money, they’ll spend it wisely and go to fewer stores.”

ShopperTrak is predicting GAFO (general merchandise, apparel and accessories, furniture and other sales) of 2.4% during the holiday season of November and December.  ShopperTrak expects sales in the electronics and appliance store sector to increase 2% compared to last year, while shopper traffic will decrease by 1.2%.

Last year, retailers were faced with dubious Christmas sales because of the threat from the federal government’s fiscal cliff.   The year before that, concerns that the European debt crisis could have global repercussions had financial markets fearing a double-dip recession here.

But the U.S. weathered both crises and, even though the economy remains fragile, Kiplinger reported the GDP would post 2% growth for 2013.

Meanwhile, the National Retail Federation expects holiday sales in November and December to marginally increase 3.9% to $602.1 billion, over 2012’s 2.5% sales growth.  The forecast is higher than the 10-year holiday increase of 3.3%.

“Our forecast is a realistic look at where we are right now in this economy — balancing continued uncertainty in Washington and an economy that has been teetering on incremental growth for years,” said Matthew Shay, NRF president and CEO.  “Overall, retailers are optimistic for the 2013 holiday season, hoping political debates over government spending and the debt ceiling do not erase any economic progress we’ve already made.”

Politics could have had a detrimental effect on holiday spending if any economic crises continued into November.  The Monitor shows three out of 10 consumers start holiday gift shopping in November, while more than a fifth (21%) start in October and nearly a fifth (18%) shop throughout the year for gifts. Just 12% of consumers wait until December to start their shopping.

Worried about the government shutdown’s effect on consumer confidence, the NRF took the step of issuing a letter to congressional leaders, urging immediate passage of a funding bill so federal employees and contractors could get back to work. And late last week, Congressional leaders finally reached a deal that ended the shutdown.

Shay cited a Gallup poll that showed consumer confidence dropped steeply the first week of October, the most in any week since Lehman Brothers collapsed on Sept. 15, 2008.

Meanwhile, the International Council of Shopping Centers (ICSC) has forecast a 3.4% sales increase.

“We’re going to see a more subdued spending mood from consumers, but what counts is that we’re on track to have a better holiday sales season than last year,” said Michael P. Niemira, vice president of research and chief economist for ICSC. “With leaner inventories, retailers can expect their prices and margins to remain stable, which is another good indicator of stronger sales.” 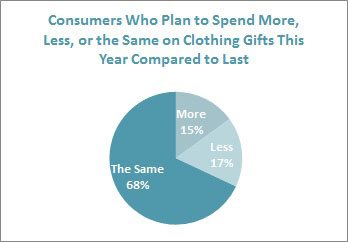 Retailers should see a lot of traffic from the customary big shopping days: nearly half (49%) of gift givers plan to shop in-store on Black Friday (up significantly from 42% in 2012), followed by after Christmas (25%) and Thanksgiving Day (15%), according to Monitor data.

Sale and promotional items are expected to help the season along as consumers continue to watch their budgets. Back-to-School was helped by promotions, but the apparel sector still reported tough September numbers.  The Thomson Reuters Same Store Sales Index saw an overall gain of 2.4%, missing the estimate of 4.5%. Apparel retailers saw an overall result of -2.2%, well below the estimated gain of 1.7%.

But Martin says consumer pull back in September and October could result in more spending during the holiday season.  Even worries emanating from the government shutdown can be overcome, he says.

“We see events of this nature create a pent up demand,” Martin says, adding, “Some consumers may have had to squeeze their pocketbooks for a couple weeks, but they may very well go back out and shop now that the crisis is over.”

Captivating the Indian Apparel ShopperFabrics of the Future