Tomorrow is America Recycles Day, the annual initiative by Keep America Beautiful that’s dedicated to promoting recycling in the U.S. And some forward-thinking apparel makers and retailers are looking to help consumers with the effort.[quote]

The Environmental Protection Agency’s (EPA) plastic’s material data[1] state that while plastics account for almost one-fifth (19 percent) of municipal solid waste, , the nation’s dumps also receive millions of tons of textile trash each year. According to data about material-specific waste[2] from the EPA, it is estimated that 16 million tons — or 32 billion pounds — of textile waste were generated in 2015. The EPA data[3] also say that about 2.4 million tons was recycled, but 10.5 million tons, or about 66 percent, went through municipal solid waste and ended up being landfilled.

After cleaning out their closets and drawers, the average American throws out more than 80 pounds of used clothes each year, according to the Environmental Health Journal. The amount that gets recycled is just a fraction of what consumers toss. Still, the recycling non-profit Planet Aid says the 2 million tons of textile waste Americans recycle annually is the equivalent of taking 1.2 million cars off the road.

Cotton Incorporated has been helping with that effort through its Blue Jeans Go Green™ denim recycling program. The initiative collects used denim from around the country and upcycles it into UltraTouch™ Denim Insulation, which is used in building construction projects. A portion is given to communities in need each year. So far, the program has collected more than 2.5 million pieces of denim, diverting more than 1,230 tons from landfills.

According to Bonded Logic Inc., the manufacturers of UltraTouch™ Denim Insulation, it takes between 500 to 1,000 pairs of jeans to make enough insulation for the average-sized home in the U.S. So Cotton Incorporated’s Blue Jeans Go Green™ program partners with retailers and other organizations to make it easier for consumers to recycle their denim locally.

This benefits the environment as well as participating stores and brands, as most consumers (90 percent) believe it is important for companies to address urgent social and environmental issues, according to the Cotton Incorporated 2019 Lifestyle Monitor™  Survey. And nearly half (48 percent) say they’re more loyal to apparel brands that “seem to share my personal interests,” according to Monitor™  survey.

Current retail partners for the Cotton Incorporated Blue Jeans Go Green™ program include Opening Ceremony, Luxe Leisure, Madewell, Levi’s, and Rag & Bone. With some of the participating retailers, consumers who drop off an old pair of jeans at their locations receive a discount on new denim.

Over two-thirds of consumers (68 percent) say they would be interested in recycling their old denim jeans or products for upcycling into housing insulation that is given to programs like Habitat for Humanity, according to the Monitor™ Survey.  More females (70 percent) than males (63 percent) want to participate, and those earning more than $50,000 were even more interested in the program (73 percent). 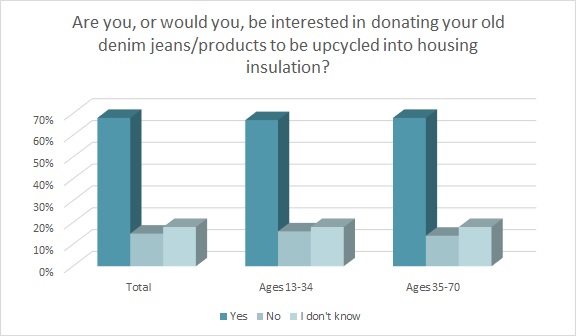 This year, the Cotton Incorporated Blue Jeans Go Green™ program announced a collaboration with Zappos for Good, the community outreach arm of Zappos.com. The shoes and apparel site is providing consumers with prepaid mailing labels that they can download and use to ship their used denim to Zappos.

“With Recycle by Zappos for Good, our goal is to help make it easy for any person to give and make a difference,” said Steven Bautista, head of charitable giving, Zappos for Good. “It’s through joining forces with our valued partners that this is possible, and we’re passionate about powering Cotton’s Blue Jeans Go Green™ [program] efforts to do more with less through its denim recycling initiatives.”

Trans-Americas Trading Company, a Clifton, NJ-based textile recycler, works with both municipalities and retailers to reduce textile waste. The company supplies municipalities with containers and transportation to collect the clothes and textiles. And the local towns see increased recycling revenue. 2ReWear, a company owned by Trans-Americas and Whitehouse & Shapiro, has partnered with Nice Laundry, a men’s socks and underwear brand, and activewear maker Ten Thousand, to help consumers recycle. 2ReWear provides paid shipping labels to each company so customers can conveniently recycle old socks and training gear, giving them a discount on their next order.

Some brands are also using recycled materials to manufacture new clothes. For instance, LA-based Boyish is including recycled cotton in some of its sustainable women’s denim. The company also recycles its cutting waste, returning some to its own new fabrics and sending the rest out for industrial use.

“Using recycled cotton is one of the easiest things we do to be sustainable,” the company states. “It requires zero new land, new water or pesticides to produce. And by using it, we are preventing it from being waste and ending up in landfills.”

To learn more about how you can recycle your old denim through Cotton Incorporated’s Blue Jeans Go Green™ denim recycling program, please visit the program website.