Gen Z is nothing if not about authenticity. And perhaps no other piece of apparel has been linked more with the word “authentic” than denim jeans. But this young generation of shoppers also championed the rise of athleisure apparel. The question for denim brands becomes, how to stand out and appeal to this set of consumers whose purchasing power is increasing, while maintaining the genuineness that is the established hallmark of the denim category.[quote]

Born after 1996 through the early 2000s, Generation Z stands at about 61 million strong and will account for 40 percent of all consumers by 2020, according to Fast Company. Last fall, the NPD Group reported that the U.S. jeans market was valued at $16.4 billion. Globally, the denim jeans market was valued at $44.02 billion USD in 2018 and is expected to grow to $85.4 billion USD by 2025, according to Zion Market Research.

Earlier this year, the NPD Group also reported that in the 12 months ending February 2019, 364 million pairs of women’s jeans were purchased in the U.S., a 22 million-unit increase compared to the prior year.

Clearly, much stands to be gained by sparking a relationship with this young consumer group. But in the Age of Too Much Information, for denim brands, it becomes a question of how to resonate, even among a generation of constantly connected digital natives.

“Diversity, inclusion and authenticity are just three elements of their all-together-now ethos,” states Criteo’s Michelle Pruett, senior global content strategist for the digital performance marketing company. “Shapeless T-shirts, sweatshirts, dresses and other low-key staples like denim appeal to Gen Z because they’re effortless and without pretense, which is exactly what they aspire to be.”

The majority of consumers (61 percent) prefer their denim jeans be made of 100 percent cotton or cotton blends, according to the Cotton Incorporated Lifestyle Monitor™ Survey. And considering how much young people value legitimacy and credibility, brands should know that nearly 9 out of 10 (89 percent) Gen Z consumers say cotton denim is most authentic when compared to manmade fiber denim. That’s slightly more than Millennials (87 percent), and close to Generation X and Boomers (both 93 percent).

For Gen Z, like every other generation, Levi’s is the most favorite brand of denim jeans (21 percent), followed by American Eagle (15 percent), Hollister and Lee (both 6 percent), and Old Navy and Faded Glory (both 4 percent). Levi’s is also the top jeans brand for Millennials (36 percent), Generation X (44 percent) and Boomers (23 percent).

Levi’s is the oldest — and original — denim jeans brand, and it wants to stay that way with the next generation of shoppers. As the Sourcing Journal reported earlier this year, the brand worked with Tubeconnect, a Germany-based influencer and marketing firm helmed by 16-year-old Charles Bahr.

Levi’s jeans are also benefitting from a fashion nostalgia wave that is tapping the ’80s and ’90s. Early this year, the brand rolled out a redux collection of its iconic Engineered Jeans at an invite-only pop-up in Berlin. While the jackets and jeans had vintage appeal, the pieces also incorporated 3D knit technology, four-way stretch and a variety of fits, including the 502, 512 and roomier Loose Jean and Slouchy Taper styles.

Vintage vibes but delivered in lighter weights is just what the younger set prefers. After years of wearing athleisure’s joggers and yoga pants, 94 percent of Gen Z consumers say lightweight jeans are more comfortable than heavier weight options, according to Monitor™ research. That’s significantly more than every other generation, from Millennials (76 percent) to Gen Xers (71 percent) to Baby Boomers (76 percent). 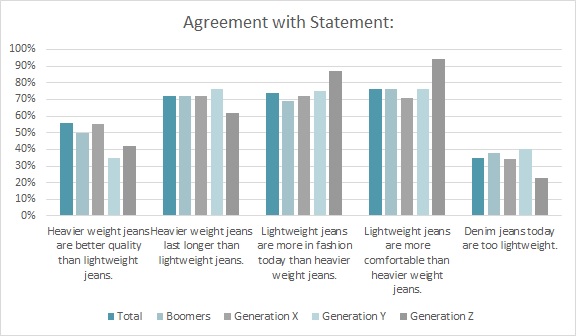 Still, the Monitor™ research shows 3 in 4 Gen Z consumers (75 percent) prefer a mix of light- and heavier weight jeans in their wardrobes.

Lightweight denim is under 12 ounces per square yard, midweight ranges from 12-to-16 ounces and heavy weight denim comes in above 16 ounces, according to denim site Heddels.com. But at the recent New York Denim Days Festival, Naked & Famous showcased its 32-ounce jeans that are rigid enough to stand up on their own without the aid of a mannequin. Billed as “The Heaviest Denim in The World,” the bottoms can be picked up at the Montreal, Canada-based Tate + Yoko denim shop for $545.

Of course, that eye-popping price is nowhere close to what the Gen Z shopper typically pays for a pair of denim jeans: $28, according to the Monitor™ survey. That’s significantly less than the amount spent by Millennials ($43) and Generation X ($40), but close to what Boomers pay ($30).

Even though these young consumers spend the least on their denim, Gen Z shoppers say price isn’t the most important factor when they buy new jeans. Rather, they put a higher value on fit (92 percent), comfort (90 percent) and quality (90 percent), according to the Monitor™ research. Price comes in at 85 percent.

While this year’s increase in denim sales bodes well for coming seasons, the NPD Group’s report pointed out that more than half the women’s jeans sold in the U.S. were purchased on sale. Brands must dig deeper for newness to continue this revived interest in the category.

“The recent growth in women’s jeans is good news for the industry – women want to wear more than just leggings and yoga pants,” said the NPD Group’s Marshal Cohen, chief industry advisor. “But, the emphasis on quantity and discounting means marketers need to find new ways to inspire the women’s jeans consumer, and deliver product that compels them to take their purchase to the next level.”

Being Digitally SavvyTaking It Personally